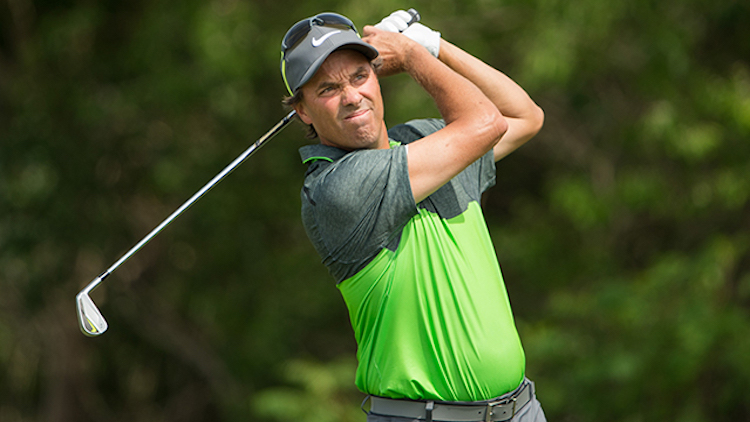 Stephen Ames had seven birdies on his card at the Omaha Country Club.

Anytime you shoot 65 at any USGA championship, you’re on your game and both Stephen Ames and Billy Andrade were the best of the field Thursday at the Senior U.S. Open in Omaha.

Ames and Andrade were both five-under par for the first round.  Andrade had a clean card — five birdies, no bogeys while Ames had seven birdies for the day, offset by a pair of bogeys.

If Ames has a claim to fame, it might be the fact that he was steam-rolled by Tiger Woods back in 2006 at the WGC-Match Play.

Woods blasted Ames for a 9-and-8 win which remains the record for the largest margin of victory in that event.

Scoring was good during the first day of play at Omaha Country Club as fourteen players managed to finish in red numbers.  Alex Cejka, winner of two senior majors this season, is in position to win a third after opening with a three-under par 67.  Wes Short Jr. was a shot behind the leaders with 66 while Robert Karlsson joined Cejka with 67.

Angel Cabrera, the 2007 U.S. Open champion and winner of the 2009 Masters was sentenced on Wednesday to two years in prison on assault charges against his former partner.

A court in the province of Cordoba the 51-year-old professional golfer for assaulting, threatening and harassing Cecilia Torres Mana, his partner between 2016-18.

Cabrera, who denied in the trial any wrongdoing, will serve his sentence immediately.

“His situation is much more complex than this, he has other charges for which there are arrest warrants, too. There are other victims,” prosecutor Laura Battistelli explained.

The first charges were brought by Torres Mana, and two other women surfaced as well.  Cabrera traveled to the United States in July 2020 without seeking permission, which led the province of Cordoba to request his arrest.  He was arrested by Interpol agents in Rio de Janeiro in January. Last month he was extradited from Brazil to his homeland so he could face trial.

He won the U.S. Open at Oakmont in 2007, beating Tiger Woods and Jim Furyk by one shot.  In addition to his Masters win, he lost in a playoff at Augusta National in 2013 to Adam Scott.

Nasa Hataoka had the 59-watch on during Thursday’s first round at the LPGA Tour’s Marathon Classic.  The Japanese star was 10-under at Highland Meadows with two holes to play.  She needed just two more birdies but a couple of pars left her “settling” for a 10-under par 61.

“When I had my ninth birdie it kind of did come to my mind,” Hataoka said of the 59 number, a score only Annika Sorenstam has shot on the ladies tour. “But then, after I only having two holes (left), I just thought how great Annika was more than me getting it.”

Hataoka was a stroke off the course record of 60 set by Paula Creamer in 2008. The 22-year-old Japanese player had her lowest score on the LPGA Tour — previous best was a third-round 63 in her 2018 NWA Championship victory.

“I think what was really working is I was able to control my iron shots to make sure I could get close to the pin to get the birdies,” Hataoka said.

Stephenson missed a chance to go lower on her final two holes, finishing with two pars on the par-five 17th and 18th.

“I took all of last week off,” Stephenson said. “I didn’t touch a club for eight days so I felt really just rest and recovered. I felt pretty tired at KPMG because that was my sixth week, so I knew I needed to just take a good break.”

All’s not well with the “fifth major” on the LPGA Tour.

Danielle Kang and Lexi Thompson are among the big name players who will skip the Evian Championship, which will be played July 22-25.

The Evian comes at a busy time for LPGA players, with two major championships and the Olympics in the span of about a month.  The Olympics will be held Aug. 4-7, followed by the Aug. 19-22 Women’s Open at Carnoustie.

Green and Feng were among the players who said they would skip the Evian to prepare for the Tokyo Games.

World No. 1 Nelly Korda will play the Evian, as will second-ranked Jin Young Ko, the tournament’s defending champion.

Cobb County Police Chief Tim Cox said Thursday that Bryan Anthony Rhoden is in custody and has been charged with three counts of murder, three counts of aggravated assault and two counts of kidnapping.

According to police, Siller, Director of Golf at Pinetree, a white Dodge Ram pickup truck that drove onto the 10th green on Saturday. When he approached the driver to investigate, police say the driver fatally shot him.

Police say that investigators found the bodies of two other men in the bed of the truck — 46-year-old Henry Valdez of Anaheim, California and 76-year-old Paul Pierson of Topeka, Kansas. Pierson was the truck’s owner.

The truck, its owner and Rhoden had no apparent connection to Pinetree Country Club.  Officials believe that Siller may have been shot simply because he approached a crime in progress. Police declined to speculate on a motive in the Pierson and Valdez killings or why the truck was driven onto the golf course.

Cox said that police identified Rhoden, who has ties to the Atlanta area, as a potential suspect shortly after the killings. He described Rhoden as a “lone shooter.” Authorities detained Rhoden on Thursday in Dekalb County, about 25 miles from the location of the Siller shooting. He was booked at the Chamblee police headquarters in Dekalb County around 5:15 p.m.