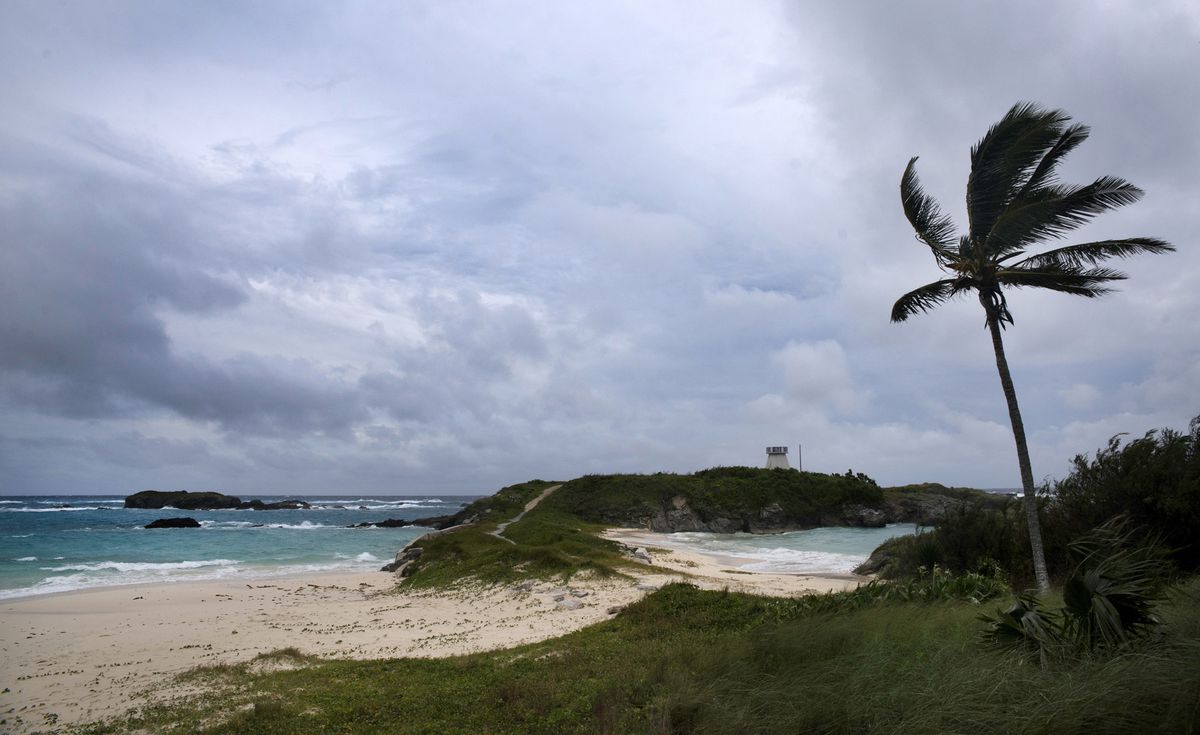 Things were pretty blustery and rainy early Thursday in Bermuda.

It was a really, really rough start early Thursday morning for the dew sweepers at the Bermuda Championship — your basic Open Championship broke out.

Winds were whipping up to 30-35 miles per hour.  Rain came and went then came back again.  They actually had to stop for five minutes when the gusts went north of 35.

Tournament favorite, young English star Matt Fitzpatrick gave his early morning testimony:  “No, this is the hardest wind I’ve ever played in.  You see winds like this (back home in England), but normally you don’t play in them. This was the hardest wind I’ve ever played in.  I absolutely ripped a drive on seven.  People are going to laugh at this because they probably think it’s my normal tee shot, but anyway, I ripped it and it went 245. That’s — I think my season average last year was like 295.  Just shows you how strong it is.”

Matty Fitz was one of those early starters.  He managed to survive a double and five bogeys, he rallied down the stretch with a couple of birdies over his final four holes and got an even par 71 on the scoreboard.

Did we mention this is the shortest course played on the PGA Tour?  Didn’t matter that it’s a smidge north of 6,800 yards, wind is the great equalizer.  Defending champion Brian Gay was lashed back-and-forth on his way to 74, probably leaving him thinking that the Champions Tour can come fast enough.

By time the afternoon wave went out, the rain cleared out, there was sunshine but it was still plenty breezy.  Brandon Hagy used his length and put a six-under par 65 on his card, best round on day one.  Hagy wasn’t exactly tearing things up on Tour coming into this event — his last three events were T58 at Sanderson Farms, T56 at The Shriners and a T54 at the Zozo.

Just before daylight ran out, Vince Whaley finished in the nick of time and tied Hagy at the top (65).

Patrick Reed’s afternoon 68 put him as perhaps the man to beat going into the final three rounds.  Reed’s round was boosted by an unusual eagle at the par five 17th.  He over-cut his drive and found the penalty area on the right side of the hole.  He took a drop.  “We had 210 hole, downwind, I went with a six (iron) and flushed it and it went in.”  Went in as in-the-hole for a penalty shot three.  “this is a lot of wind but it’s fun,” Reed said.  “It’s one of those courses where, if there’s no wind, you’d go out and destroy it.”

The wind prevented any destruction per Reed.  Two recognizable names were two shots behind Hagy — WGC winner Garrick Higgo and Ireland’s Seamus Power — both in with 67s.

Play was suspended when darkness set in.

Brian Morris, the Bermuda club pro battling stage four terminal cancer, was 15-over through 15 holes but he still drew the biggest gallery of the day.