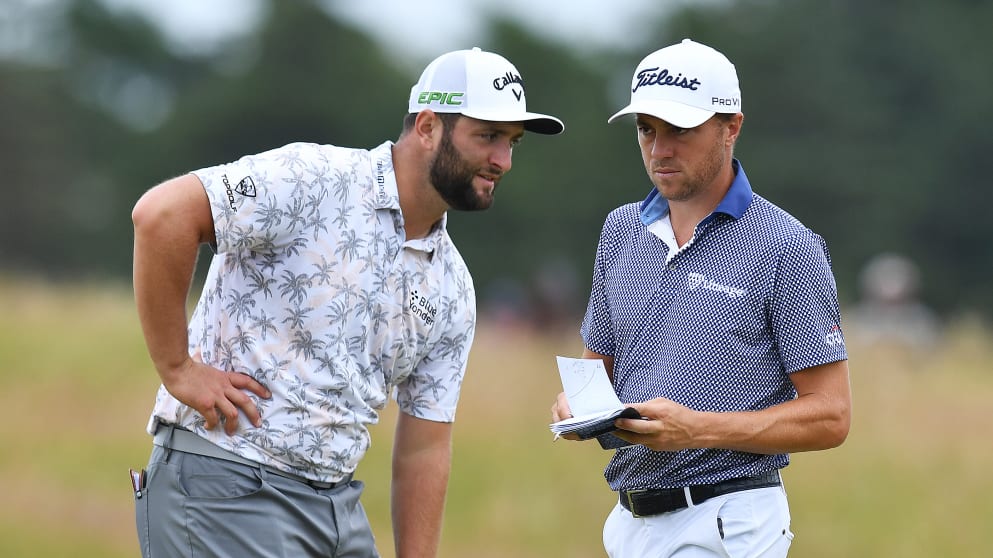 John Rahm opened with 66, Justin Thomas cut him by a shot in Scotland.

It was a perfect afternoon for scoring, the morning wave saw European Tour icon Lee Westwood put a six-under par 65 on the scoreboard, giving Rahm and friends something to shoot at.

There wasn’t enough wind to move the flags on the clubhouse, there was sun, no rain — so very un-Scottish weather.

The old saying in Scotland “Nay wind, Nay rain, Nay golf” had no application on this perfect day.  With no weather defenses, links golf courses are open for scoring and it was “Aye scoring” on day one of the Scottish Open.

Just about all 3,000 who came through the in the gates were there to get a look at Rahm, Thomas and McIlroy.  They were excited and so was the reigning U.S. Open champion.

“Playing with Justin Thomas and Rory McIlroy with their resumés puts you in your place,” Rahm pointed out.  “I’m still really far from what they have accomplished. It’s certainly motivational, you know?  I’m not going to lie, I think I might have missed that first tee shot because I’m there sitting with Rory – great player, JT – great player, and I get announced as World Number One, Race to Dubai leader and U.S. Open champion.  They just said Rory McIlroy, JT, so I was just a little surprised by it.  I didn’t expect it.  My ego might have got a little too big, tried to hit a little too hard on one.”

Rahm missed that opening tee shot wide right but he didn’t miss many shots on opening day at this warmup for next week’s Open Championship at Royal St. George’s.

By day’s end, Rahm and Justin Thomas gave their gallery something to talk about — Rory?  Not so much.

Rahm posted a five-under par 66 and it’s absolutely the highest score he could have shot.  He missed two birdie putts inside nine feet on the first nine then missed another from three feet at the 10th.  He missed a six-foot par putt at the 15th but still managed to shoot that 66.

J.T., the world’s No. 3, nipped him by a shot.  His shot of the day was the 90-footer he holed for eagle at the seventh on his way to an attention-getting 65 that left him just a shot behind first round leader Jack Senior, a player with just two top 10s in 61 European Tour events.

J.T. was sitting firmly in second along with Westwood, who was once an honorary member at Renaissance when he lived in Edinburgh.

As for Rahm, he was pumped.

“I didn’t have my best feel out there but after the first tee shot, which was probably about as bad a tee shot as I can hit – feeling-wise as well – I just told myself really trust the visualization process, see the shot, trust the shot and trust that your body can do it, and it really worked out.  Sometimes you’ve just got to get out of your own way.”

As for McIlroy, once again Rory pretty much got in his own way.  After working early in the week with new swing coach Pete Cowan, expectations were high for the four-time major champion who struggled last week in Ireland.

All Rory could muster was a one-under par effort and he had to hole a 12-footer for par at the 18th to stay in red numbers.

As for Thomas, it was a great start, especially that huge eagle putt on the outward nine.  That was a steal,” Thomas said. “You obviously never plan on making a 100 footer or whatever it was but the hole got in the way perfectly.  Obviously, six under is great.  I’d love that every round of golf I play. Bogey-free made it pretty stress free.  I was a little upset or disappointed with some of the iron shots I hit.  Felt I could have hit them closer but nice to play that last hole as well as I did to hopefully generate some momentum.”

At 18, Thomas hit his second within eight feet for a closing birdie.  Afterward, he admitted that he got a boost from Rahm.

“Jon and I were kind of feeding off each other a little bit and just trying to stay in the tournament.”

They did a bit better than “stay in the tournament.”

They both had a statement round and stood out in one of the best-ever non-major fields for a European Tour event.

As for that perfect weather on Thursday, well, there’s better than a 70 percent chance of rain for the second round, 61 percent for Saturday and 87 percent for Sunady.

Friday Update:  Jon Rahm got after it as he went out in the early morning wave.  Starting on the 10th and six birdies later, he made the turn in 29.  He cooled off on the final nine, playing the first nine in even par 36 to finish with 65 and was the early leader at 11-under par.  He made a terrific sand save on his final hole, the par three ninth.  After short-siding himself in a deep right greenside bunker, he got up-and-down for par.  Justin Thomas wasn’t as fortunate.  He made bogey to finish his round with 69 and was in at eight-under and squarely in contention heading into the weekend.  As for Rory McIlroy, he was horrible again on day two.  He was even par for his round, one-under for the tournament and stood over a 27-footer for birdie on that final hole.  Of course he left his birdie try short, hanging on the lip.  His 71 left him on the wrong side of the projected cut line of two-under par.  Scoring conditions were once again good with little to know wind and things were getting misty with rain possible for the afternoon groups.