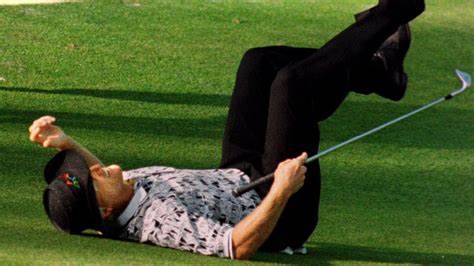 The Lamest Commissioner suffered another knockdown during his Capitol Hill propaganda visit.

Posted By: Tom Edringtonon: September 23, 2022In: In Other News...No Comments

The Lamest Commissioner In All The Land (aka Greg Norman, aka The Great White Fish-Stick) went strolling up to Capitol Hill on Wednesday and his reception, well, it didn’t work out quite the way he hoped it might.

The last time Norman (aka TLCIATL) took a beating like this, Sir Nick Faldo was dragging him by the neck around the back nine at the Augusta National Golf Club at the 1996 Masters where The Great White Fish Stick pulled a four-hour choke-fest and blew a six-shot lead.

Well, some Congressmen had some choice words for Norman when he had the nerve to show up and spout his LIV propaganda — they saw right through him.

Tennessee’s representative, Tim Burchett, walked out of the lunch meeting with the Lamest Commissioner and described Norman’s lobbying efforts as “propaganda.”

Burchett summed it up:  “It’s propaganda.  I don’t want to hear about that. It’s not Congress’ business to settle a fight between a bunch of billionaires over a game of golf. They need to take it to the courts. Congress made a big mistake by getting involved in Major League Baseball. Here we are dealing with a (league) being funded by some Saudis. I just thought our priorities were out of whack.”

Burchett also brought up the Saudi connection to the 9/11 attacks and the murder of Washington Post columnist Jamal Khashoggi, who by the way, was an American citizen.

Representative Chip Roy from Texas had some choice words for The Lamest Commissioner:

“Don’t come in here and act like you’re doing some great thing, while you’re pimping a billion dollars of Saudi Arabian money,”

Roy hung around for the entire meeting with Norman and added:

“I respect Greg and his (right) to go out and do whatever he wants to do.  But it’s not as simple as he tries to make it out to be. He says they just want competition, and it’s like there are hummingbirds and butterflies flying around everywhere. The big, bad PGA Tour and its monopoly are preventing them from having their awesome little competition. It’s much, much more complex than that.”

So yeah, nice try by The Great White Fish Stick.  But obviously it wasn’t difficult to see what Norman is trying to peddle.  And no one’s buying what he’s selling.

Speaking of propaganda from The Lamest Commissioner, well, he keeps saying “We’re talking to four different networks” — which sounds like a bunch of malarkey given that Apple TV and Amazon have already given LIV the cold shoulder.

The LIV circus/exhibition is available free on U-Tube but their numbers are pretty miserable.  Numbers site Robopz has been analyzing the number of viewers throughout each LIV event this year and you’d figure with Cam Smith in that Chicago field, well, there would be all sorts of eyeballs.  The LIV audience, per Robopz, peaked at 95,000.

So yeah, The Lamest Commissioner can boast to those prospective networks that his traveling Infidel-funded circus can bring literally thousands of viewers.

Patrick Reed Does A First Round Face-Flop In France:

Things were going pretty well for the old sand-swiper through 14 holes.  Reed (aka Table For One) was three-under at that point but then at the 15th, a water-ball for his second led to a double-bogey and obviously rattled, he clicked off three straight bogeys to finish with a two-over par 73 at Le Golf National outside Paris.

Reed’s 73 put him a cool 11 shots back of first round leader Rasmus Hojgaard, who turned in a nine-under par 62.