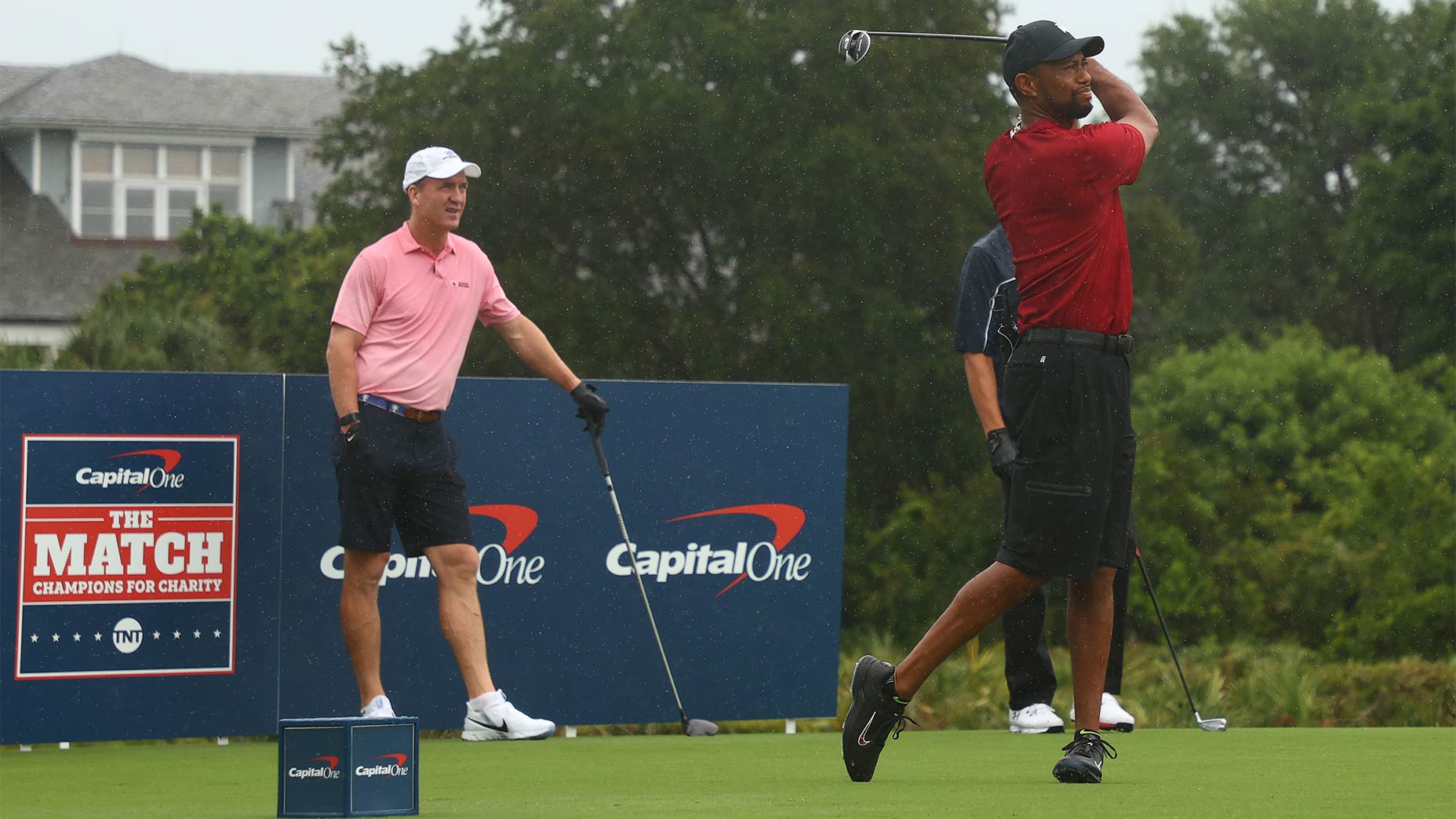 Woods and Manning held on for a 1-up win over Mickelson and Brady.

No, she didn’t hold back Sunday afternoon as the east coast of Florida was pelted with rain, making for one incredibly interesting, exciting match between two of golf’s biggest names and two of pro football’s finest-ever.

Through the showers, squalls and drizzles at the well-manicured Medalist Golf Club, the teams pressed on — Woods and Manning against Mickelson and Brady, no holds (or bad golf shots) barred.

This one totally lived up to the hype and anticipation and, in the process, raised a whopping $20 million for COVID-19 relief.  But the money didn’t stop there — golf experiences with Woods and Mickelson were auctioned off during the action.  Someone forked over $260,000 to hang with Eldrick down in the Bahamas at the 2020 Hero Challenge while it took $190,000 to play 18 with Phil Mickelson later this year.

But that was loose changed compared to money earned by this high-profile foursome.

After about a 30-minute delay, it was finally ball-in-the-air around 3:48 p.m.  With Manning and Brady showing some early jitters, it was up to Tiger and Phil to steady the show.  All-square with pars on the first two holes in the best-ball front-nine action.  First blood came on the par three third where Woods won the long drive between the pros reached the par five in two and his routine birdie put his team one-up.  Took a hour to play the first three holes.  Brady couldn’t find the golf course with a road map.  His tee-shots would have had to been better to reach the “wild” category.  He didn’t have drive in the bag, only a three-wood and that would make for a long day on a wet course.

Woods was rock-steady early, Mickelson wild, looking a bit nervous.  Lefty had his two black rain gloves on.  Wise guy Charles Barkley was on site, working the broadcast for Turner Sports, perfectly playing the role of trash-talk instigator.  “Fifty thousand out of my pocket (to charity) if Brady hits it on the green,” he spouted at the new Tampa Bay Buccaneer quarterback.  Of course Brady then went wide right into the scrub area on the first par three of the day and Barkely howled:  “I should have said keep it on the planet.”

At that 184-yard par three fourth, once again Brady was wide right, Mickelson 20 feet, Manning 15 and Tiger a snuggly eight feet, looking to go two-up.  Mickelson missed then Manning ran his in to put his team two-up.  The teams halved the one-club hole with bogeys.  Tiger’s par putt with a four-iron lipped out.

The Woods-Manning duo increased the lead to three-up when Manning made par with a stroke (four for three) at the par four sixth and suddenly this one was looking like a rout.  Three-up through six.  Tiger was a couple under on his ball, Mickelson two-over, Manning four-over and Brady a whopping 13-over, looking every bit like a 20-handicapper with Barkley chirping at him constantly.

But the Barkley silencer came at the par five seventh and got Brady going.  Brady found himself about 100 yards short of the green in three on the par five.  He needed something good to happen as Brooks Koepka twittered in that he’d throw $100,000 in the charity pot if Brady could just manage a par on the front nine.  Tom did better than that.  His fourth landed just past the flag-stick, spun back and found its way into the hole for a natural birdie.

“Take a suck of that, Chuck. Shut your mouth, Chuck,” Brady chided at Barkley.  “Take a load of that medicine.  Get your butt out here!”  Brady said it was exactly what he needed.

No win, however, Woods nearly holed his eagle putt, it lipped out and his team would head to the back-nine with a hefty lead.  Woods shot 34, birdies at seven and eight got Phil back to even par.  Manning shot a respectable 40 and Brady’s 51 strokes were tough to watch with the exception of the wedge-heard-round-The-Medalist.

A Back Nine Comeback from Mickelson-Brady:

The modified alternate shot format on the back nine was just what Phil and Tom needed along with some better play from Brady.

After pars at the 10th, Brady found the fairway at the 338-yard 11th, freeing up Mickelson and Lefty responded by driving the green, his ball just 25 feet from the hole.  Brady, with great coaching from his partner, slid that eagle putt in the cup, the lead was cut to two-up and suddenly things got interesting.  At the par three 12th, Mickelson got his partner inside eight feet.  Team Wood-Manning missed from 12-feet and with a chance to trim the lead to one-up, Brady missed.

At the 630-yard 13th, it looked like the Wood-Manning lead would go to one-up.  With some nervous play out of the amateurs, Manning had an eight-footer for par, Phil was staring down one from six-feet.  Manning missed leaving the door wide open for Mickelson.  Lefty missed and that would prove the biggest miss of the day because at the next hole, a short 318-yarder of a par four, Manning, who played so well on the first nine, missed a three-footer and suddenly it was a ball game — his team was just one-up with four to play.

But that’s as close as it go.  Pars at 15.  Manning came to life, stuck his tee ball inside two-feet at the 183-yard 16th and they tied with birdies as only Woods failed to hit it close.

Woods put Phil and Tom out of their misery when he snuggled a 40-footer within a foot at the 18th to close it out.

Great match, tough conditions.  Big money, lots of banter, better production — yes, this one was a different animal from the foursome last week at Seminole.

“It’s great, the fact that we all came together and were able to raise $20 million for those that have been so seriously affected.  This is our arena.  This is what we do.  We couldn’t imagine going out onto the field and doing what they (Brady-Manning) do.”

At the end of the day, and they beat darkness, barely, it was a blast, despite the rain, despite some ugly shots.

Phil and Tiger, Part II, well, it was great to have them back.

Editor’s Note:  Today is Memorial Day and we’re still battling the Corona Virus pandemic.  Please take a moment to pause and reflect on all those who have given  “Their Last Full Measure Of Devotion.”  Pause and remember all those who have fallen on battlefields around the world in service to our country, those brave men and women who answered the call, paid the ultimate price so that we can enjoy the freedoms our nation provides.