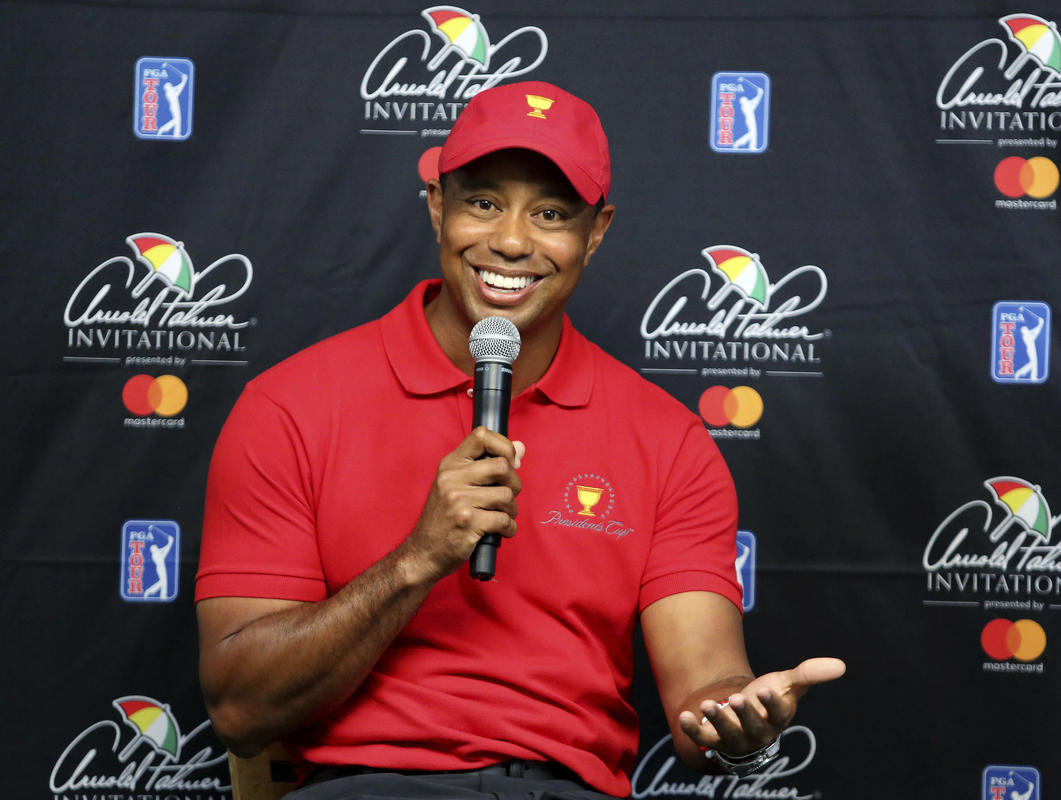 They put a different shade of red on Tiger Woods this week at Bay Hill.

It was just like old times Thursday at Bay Hill.

Tiger Woods was there and a Tiger Woods crowd was there early in the chilly Orlando morning, thousands of ’em, like an old Arnold Palmer gallery back in the 60s.

It was just like old times with Woods playing well and making an early run up the leaderboard — something he grew very accustomed to starting 18 years ago when he won for the first time.

It was like old times except that Arnie wasn’t here but his spirit was.

The two forces — Woods and Palmer, were the yin and the yang of Bay Hill.  This was the course and the tournament Arnie built and Woods made it even bigger — winning eight times.

The masses will overrun Bay Hill over the next few days.  Popular sentiment is that Woods could find himself late Sunday afternoon with PGA Tour victory No.  80.  He came oh so close last week at Innisbrook, losing the Valspar by just a shot to Paul Casey.

On Thursday, Woods found the magic and the start he needed to make that No. 80 look totally within reach.

He layered up for his early tee time and got off to a great start, finding three birdies over his first nine holes.  “It was cold, not as cold as last week but it turned out to be a beautiful day,” Woods said as the afternoon wave hit the course.

By the turn, there were close to 20,000 surrounding Woods.  Word spreads fast when he makes the turn three-under.

His short game kept him well under par, he nailed both the par fives on the back, his first nine.

Adversity showed up on the third hole when his three-wood tee shot sailed way too far right and would finish out-of-bounds, barely.  “If you look at the two posts, I was out by four or five inches,” Woods said afterward.  That errant shot cost him double-bogey but the wind didn’t leave his sails.  He birdied two of the next three then hit his tee shot at the par three seventh too far right, on the fringe, a whopping 71 feet from the hole. “I made that bomb,” Woods said with a huge smile. “I was just trying to get down in two, luckily, it hit the hole.”

Roars ensued.  Old roars like the ones a Palmer charge would inspire.

This was a new-age Tiger roar, a comeback roar, a “Tiger might win this” roar.

A routine par at eighth and a clutch 11-footer that saved par at nine got Woods in the house at four-under — 68.

“It was a good round today.  The greens were a little bit slow starting out but as it warmed up, they got quick.  I feel way more comfortable in a tournament setting.  I have my tournament feels back.”

With eight wins in 17 starts, Bay Hill has become more than comfortable, it has become Tiger’s favorite old leather sofa.

There’s a long way to go in this one.  He started three shots back after the first round last week and almost pulled it off.

He’s four back of Henrik Stenson but this is Bay Hill.

This is Tiger’s track and Arnie’s home.

The masses will be out the next three days.  The weekend will be pure chaos.

Tiger Woods is supposed to win this week.