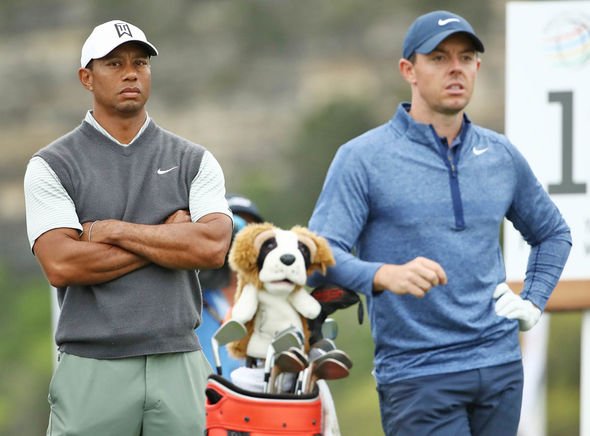 Tiger Woods will be play world's No. 1 Rory McIlroy (and Brooks Koepka).

Tiger Woods Is Back, Acknowledges “A Silent And Different World”

No one elicits the roars from a crowd like Tiger Woods.

No one, absolutely no one in the world of golf moves the needle like Tiger Woods.

Tiger Woods is back on the PGA Tour for the first time since last February.  He got in an early Tuesday morning practice round at Muirfield Village with Justin Thomas, prepping for The Memorial, then shared his thoughts on what the PGA Tour looks like moving forward amid the COVID-19 pandemic.

“It’s a silent and different world,” he said of events without fans and there will be no fans for the rest of the season — the PGA Tour made that call this week.  “Even in college I had a few people following me,” Tiger remembered.  He said he’s been waiting to see how things played out for the Tour’s return.  Tiger said he’s comfortable with what the Tour has done to protect the players.  “It’s a risk all of us are taking.  The Tour’s done a fantastic job and it’s a risk I”m willing to take.”

Tiger’s also spoken to fellow players.  “The guys have said the energy’s different, there’s nothing to feed off of.  This will be my first full tournament ever with no fans.  We had one round in D.C. after bad weather but now it’s a different world.”

The last time Woods played (The Genesis) he was stiff and finished last in the field.  “Physically I was very stiff in L.A., it was cold, I finished dead-last.  Fast-forward, I’ve trained a lot.  Physically I feel so much better than I did then.”

Woods has been keeping an eye on play while he was at home.  “The courses have been set up a little on the easier side but the guys have played unbelievably well.  Last week (Workday) I’ve never seen anything that low on a course I know is difficult,” he said, referring to Muirfield hosting the Workday.

“Yeah (sigh) he’s figured out a way to increase distance.  What Bryson has done is no easy task.  He’s gotten stronger, bigger, faster.  The fact that he’s been able to reign in the foul balls (wayward drives) is just as impressive as the distance,” Woods pointed out.

But the real interest remains in the 15-time major champion — Tiger Woods.

What can the world expect from Tiger Woods at The Memorial, where he has won a whopping five times?

“It’s so different not to have the energy of the crowd,” Woods emphasized and no one energizes a crowd like Woods.  “Last week when J.T. made that putt (50-footer on first playoff hole), the hillside would have erupted.  It would have been tougher for Collin (Morikawa) to make that putt,” Woods said, talking about Justin Thomas’ 50-foot birdie putt followed by Morikawa’s 24-footer to prolong the playoff.

“I would like to say I’m going to win the event.  Hopefully that will be the case.  I have to go out there, do my work and make that happen.”

The push for win No. 83 continues.

It continues in a silent and different world for Tiger Woods.

Editor’s Note:  Obviously curiosity got the best of Tiger.  He got in some practice Wednesday morning with Bryson DeChambeau.  Bryson’s “good drives” were 50 yards by Tiger.  Bryson’s “bad drives” were only 15 past El Tigre.