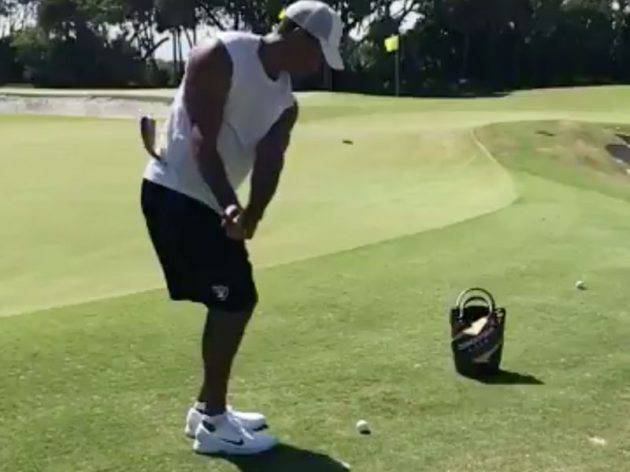 Tiger Woods is most likely chipping and putting on his incredible short game area.

Is Tiger Woods already back at work, getting ready for his return to competitive golf?

Well, considering the fact that Tiger can now walk unaided, it’s certainly within the realm of reason that he’s beginning to chip and putt on those sensational greens that are part of his world-class practice complex behind his palatial estate on Jupiter Island.

Putting is not a reach.  As long as Tiger can stand, he can putt and knowing his ability to rehab from injuries, it’s certainly no surprise if the old trusty Scotty Cameron is getting a workout.

Also, Woods enjoys putting his son Charlie and no doubt Charlie’s working with his dad as well.

Some sites are playing it up as big, breaking news.  It’s simply not, it’s just the next logical progression in Tiger’s return.

Chipping and putting is where it all starts.  There’s been a lot of inactivity for Woods but that’s the logical start for the 15-time major champion.

And this begs the question:  Will Tiger play in the 2022 Masters?

First and foremost, let’s see how freely he’s moving around when he hosts his Hero World Challenge at Albany in the Bahamas next month.

Italy’s Nino Bertasio has never won on the European Tour but evidently he’s trying to change that.

Bertasio fired a 10-under par 61 Thursday at the Portugal Masters as the 33-year-old Italian player, ranked No. 419 in the world, got off to his best start ever on the European Tour.

It was a 10-birdie day for Bartasio, who was four shots clear of Spain’s Adri Arnaus at the Dom Pedro Victoria Golf Club.  Arnaus shot 65 and, like Bertasio, is looking for his first win on the European circuit.