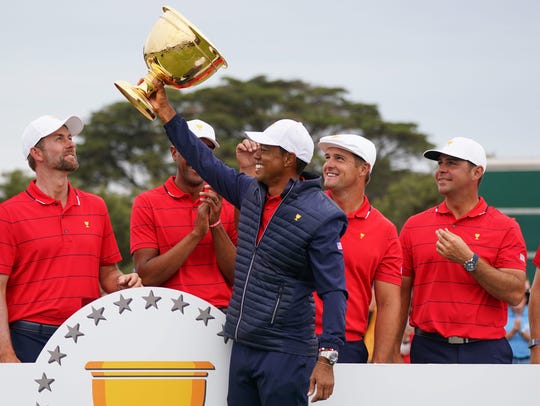 Tiger Woods went out first in the finals and showed them how it's done.

Tiger Woods Showed Everyone How To Lead From The Front

The greatest leaders will lead from the front, not from the rear.

That’s why Tiger Woods wasted no time in the decision as to who would go out in the first singles match at Royal Melbourne with the Presidents Cup on the line.

The score was 10-8 in favor of the Internationals at the start of the final day’s singles competition and Woods sent out his team’s best player — himself.

Abraham Ancer got his pre-tournament  wish.  He wanted to take on Tiger Woods and said that weeks before the team arrived in Australia.  Once again, Ancer found  out  that when you mess with the best, you’re a loser with the rest.  He would become another notch on Woods’ pistol, another victim of the man who has all the shots and can still bring the heat when he needs to.

By the second hole,  Woods was 1-up and he’d never trail.  He made Ancer look at his full arsenal of fades, draws, knock-downs, stingers, incredible pitches around the greens and a putter that will rip your heart out.  Sorry — not today,  Abraham.

By the 16th hole,  Woods stood over a 10-footer for birdie to close out Ancer and before the ball was halfway to the hole, his hat was off and he was walking toward his opponent.

Tiger, the leader, got things rolling then went out to captain his teammates, to get them across the finish line after they trailed all week.

Dustin Johnson had no problem crushing Haotong Li, who was the worst player on either team.  Li flat out stunk all week and was no match for D.J. or anyone else for that matter.

After failing miserably in team play, even lightning rod Patrick Reed got after it and was four-up on C.T. Pan before Pan could say “C.T.”

Patrick Cantlay churned out seven birdies in 15 holes and put an end to Joaquin Neimann.

Tiger’s guys were coming through for him when he needed them most.

Tony Finau found himself 4-down to Hideki Matsuyama with just eight holes to play and Tony found a way to rally fiercely and salvage a tie.  Beginning of the end for the Internationals.

Matsuyama was one of the big names who let Captain Ernie Els down on Sunday.  Adam Scott and Louie Oosthuizen, the two majors champions on the International team, failed Ernie miserably when it counted most.  Xander Schauffele had Scott 4-down at the turn and would close that match out at the 17th.  Oosthuizen was 3-up on Matt Kuchar at the turn but couldn’t get a point for his team.  Kooch rallied to get a tie and his half-point clinched the cup for team USA.

Els has to look no further than his senior leadership — Scott, Oosthuizen and Matsuyama — to see where it all fell apart.  He was also counting on Marc Leishman for points.  All he got was a tie with Rickie Fowler and by that point, it was all over.

Tiger’s guys managed to come up with eight points in the singles and that was good for a 16-14 American win.

“All my boys, they did it,” said an emotional Tiger Woods, tears in his eyes. “It’s been the most amazing challenge of my career,” he said of his playing captain stint Down Under.

“We relied on one another as a team and we did it — together,” Woods said emphatically.  “This cup wasn’t going to be given to us.  We had to go earn it.  And we did.”

Yes, 16 years after that stinking tie,  Woods hoisted the prize.

It wasn’t easy, but in his world, very few things are.