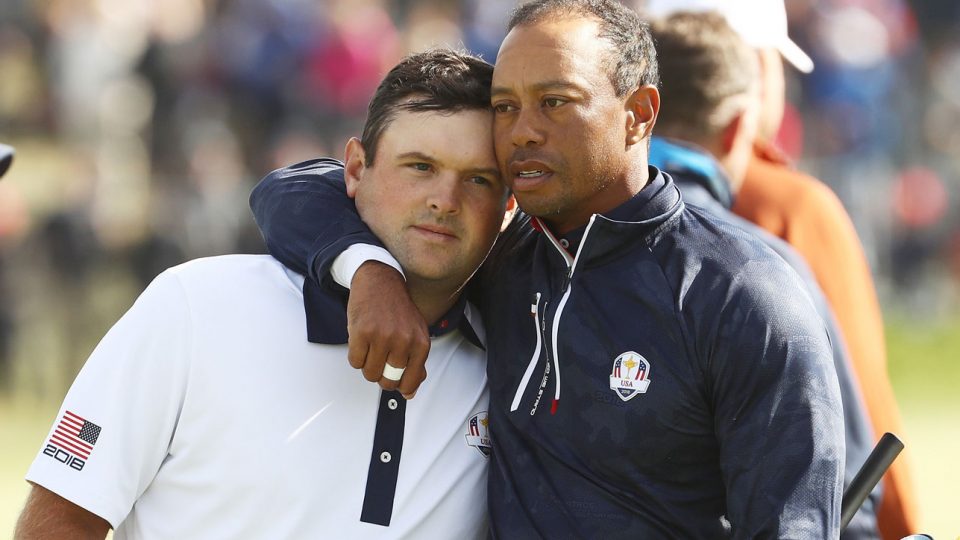 "Thanks a lot Patrick, for being a royal pain in my butt!"

Tiger’s Guys Have A Hot, Stinking Mess In Their Team Room

Pay no attention to that large, stinking pile of fresh poop in the team room.

That’s what Tiger Woods has to whisper to his United States Presidents Cup team over there in Melbourne, in  The Land Down Under,  as they prepare for a little four-day interlude with the Internationals of Ernie Els.

The odor emanating from the U.S. team room is the ongoing stink that Patrick Reed brought with him from Albany, you know — Sand-Gate.

As the lads from the USA arrived in Aussie-land, Reed’s strategy was the same he’s used for a long time — play the victim card and by all means — deny, deny, deny and then deny some more.

Only the most naive would believe Reed when he tried to play the old “it was unintentional” card when it came to the incident where he blatantly improved his lie in a sand waste area during the third round of the Hero World Challenge.

Of course Captain Woods had to face the music for Reed during Tuesday’s presser with International leader Ernie Els.

Tiger was quick, terse and brief.  “Pat and I are friend.  We discussed it, it’s behind us.”

Kinda like the old Bill Belichick line — “It’s on to Cincinnati.”  And Bill knows a thing or two about getting caught cheating.

Anyway, back to Captain Woods.  Tiger’s had a lot of experience handling his own troubles but this is a new chapter for him.  He’s handled a lot of back pain in his day but Reed has become a giant pain in his glutes.

Tiger did his best to deflect Sand-Gate.  Good for him.

The larger problem is that Reed has put his teammates in the awkward position of having to smell the stink that Reed brought with him.

Justin Thomas, playing with Woods, Reed and Patrick Cantlay in a Tuesday practice session, made a light-hearted poke at Reed when he practiced a difficult bunker shot, swept sand from the back of the ball and said:  “Hey Reed, is this right?”

All kidding aside, it drew a lot of laughs but at the end of the day, Reed has his team playing defense.

At least two Internationals flat out called Reed out for cheating — Marc Leishman and Cameron Smith — two Aussies.  Reed countered them by saying the upcoming matches have “become personal.”

That’s one of Reed’s defense mechanisms when it comes to his questionable behavior.  He makes it personal, makes it him against the world, makes it Patrick Reed the oppressed victim.

Yes, things were supposed to be pretty dull this week at Royal Melbourne.  The U.S. team with packed with talent and players from the top 10 in the World Rankings — J.T., Dustin Johnson, Tiger, Cantlay and Xander Schauffele are all in the top 10.   Webb Simpson, Reed and Bryson DeChambeau are 11, 12 and lucky 13 respectively.  Highest ranked International is Adam Scott at 18.  On paper, it’s a mismatch.  Fortunately the matches are played on grass, not paper.

At the end of the day, you have to hand it to Reed, he’s made things a lot more interesting — but not in a great way for his team.