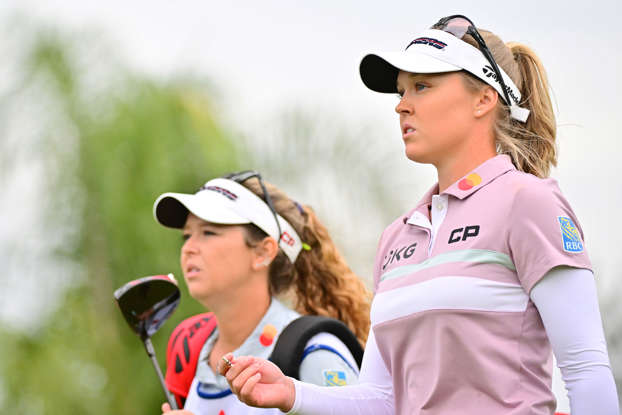 Brooke Henderson and caddie/sister Brittany were the winning team.

Brooke Henderson is back, she’s feeling great and that spelled bad news for the rest of the field at the LPGA Tour’s season opener at Lake Nona.

Canada’s winningest golfer added another victory to her resume as Henderson dominated the field at the Tournament of Champions and went wire-to-wire with a closing round of 70 on a windy Sunday.  Henderson took control one day one with a 67 and followed that up with rounds of 66-69 and the closing 70 with winds blowing 15-20 miles per hour.

She finished 16-under par, four shots clear of Maja Stark and Charley Hull.  Henderson finished second here last year to Danielle Kang and has been no higher than ninth in her four appearances.

It is so exciting,” Henderson said after her day’s work. “I always try to win a couple times each year, so to get one right way out of the gate takes a little bit of pressure off.  It’s exciting to be in contention, and even more exciting to hoist trophies.”

She got two wins last year, the first at the ShopRite and a second at the Evian where she took home her second major championship.  Her four rounds to start the new season marked her 16th consecutive round under par and her 16th straight sub-par round in this event.

Henderson didn’t have any issue adjusting to her new TaylorMade equipment and golf ball.  That didn’t appear to be the case for Nelly Korda, who finished solo fourth at 11-under par.

Like Henderson, Korda made a big equipment switch, going from Titleist to TaylorMade.

“What’s good is that I have a lot to work and I’m very excited about it,” Korda said.  “I have four weeks (off from the tour) to kind of grind and see where my game is.”

Korda was referring to the wacky LPGA Tour schedule.  The Tour doesn’t resume play until February 23 in Thailand.

Victor Perez won his first Rolex event on the DP World Tour Sunday at the HSBC with an incredible shot on the 71st hole that he called “probably the greatest shot I’ve ever hit.”

Things were getting pretty tense down the stretch at the Yas Links.  Perez was locked in a tight battle with Min Woo Lee and Sebastian Soderberg on the back nine.

At the tough par three 17th, Perez bunkered his tee shot then pulled off a miraculous birdie when he spun his sand shot back into the cup for a two.  That got him to seven-under for the day and 19=under for the tournament.  He had some breathing room and needed it.  Perez drove into a fairway bunker, hit his second shot nearly into the water and two-putted for a bogey.  Still, he shot 66 and posted 18-under.

Min Woo Lee, playing in the group behind, needed an eagle at the last to force a playoff and his third shot raced just past the hole then rolled slowly back down the hill to settle within a foot of the cup.  Perez, watching on television from the scorer’s room,  celebrated his third DP World Tour win and the$1.5 million top prize.

Only then could Perez, watching the television in the scorer’s hut, truly celebrate winning around $1.5 million at one of the tour’s top events.

“There’s a lot of big things coming up, I’ve had a really good off-season, I’ve worked really hard,” said Perez as emotion took over and he covered his face with his hands.  Perez will jump from No. 111 to 63rd in the world rankings and put himself in prime position to make the European Ryder Cup team.

It could be a life-changing victory for Perez, who climbed into second place in Europe’s Ryder Cup qualification standings. A captain’s pick for the contest with the United States outside Rome looks likely at the very least.