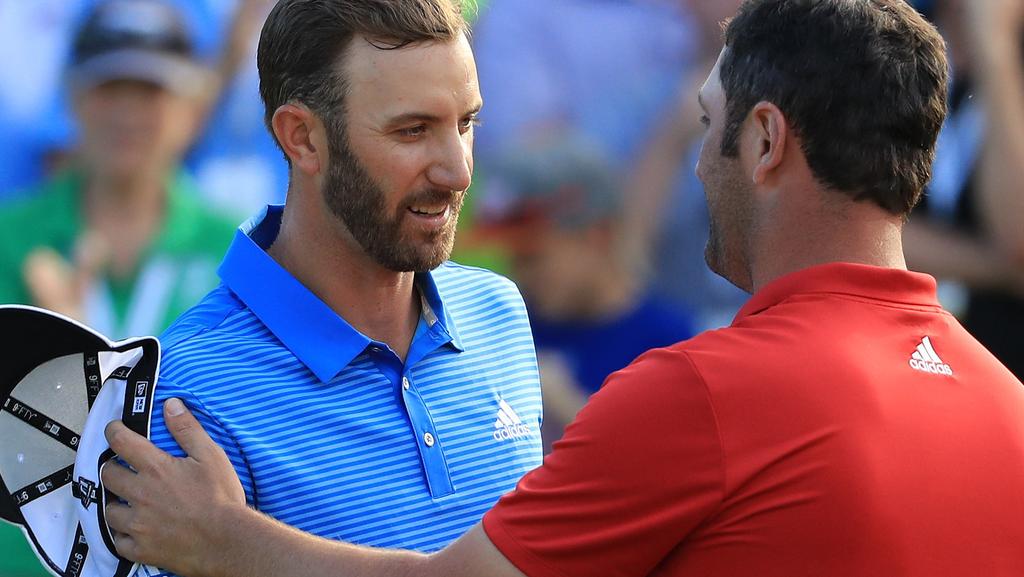 Jon Rahm made up two shots on Dustin Johnson in the first round.

The first round of the Tour Championship is in the books and on Friday, Jon Rahm made up two shots on Dustin Johnson.  They are tied at the top at 13-under par.  They are ranked one-two in the world and numbers three and four are right behind them.

Here’s how the first round unveiled at East Lake:

Dustin Johnson:  D.J. started the day 10-under and had a short birdie putt at the 18th hole to take the lead by himself.  It was a mere four-feet, six inches but Johnson couldn’t convert.  His first day’s work wasn’t great but it wasn’t bad.  He turned in a three-under par 67.

Jon Rahm:  Rahm nearly made birdie at the 18th from a greenside bunker but settled for par after his drive found the left rough and he was forced to lay up on the reachable par five.  Rahm didn’t drive the ball as well as he’d like but still shot 65 and made up the two-shot stagger start that Johnson had on the first tee.

Justin Thomas:  J.T.  made a nice birdie putt at the 18th hole for a 66 and the world’s No. 3 shot 66 to reach 11-under par, putting himself in good position heading for day two on Saturday.

Rory McIlroy:  Rory tied for the day’s best round with a six-under par 64.  Rory was only one-under at the turn but had five birdies coming home including three straight to finish out the day.  “Golf was the furthest thing from my mind coming into the week,” McIlroy admitted as he and wife Erica became parents for the first time on Monday.  “It was nice to get on the course for four or five hours and just do this.  I’ve seen signs in my game the last couple of weeks that it’s getting better.  I was happy to start the way I have.”

Abraham Ancer joined McIlroy with the day’s best round.  Abe’s 64 put him by himself at seven-under while Sungjae Im (68), Brendon Todd (67) and Xander Schauffele (67) were all at six-under par.

Webb Simpson got six-shots to start.  He got off to a horrendous start as he was four-over after his first five holes.  But he brought it back to finish with even-par 70 for the day to keep himself in the conversation.