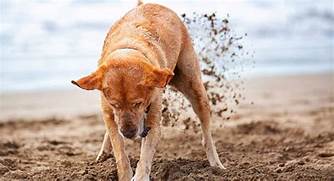 Posted By: Tom Edringtonon: August 17, 2020In: In The DoghouseNo Comments

In the round of 16 at last week’s U.S. Amateur Championship at breezy Bandon Dunes, there was a rules violation unlike any other.

Strafaci and Oliva Pinto were tied heading to that final hole, a 524-yard par five.

Strafaci’s tee shot stayed just inside the penalty area on the right. He laid up to 109 yards in the fairway with a nice angle at the right pin — but then he shorts his approach shot, which winds up just short of the green.

Oliva Pinto, meanwhile, maked poor contact with his second shot and was left with 225 yards for his third. His long-iron effort wound up in the front right bunker.

So as both players are approaching the green, getting ready to play their fourth shots, the drama began.

It was on-course reporter Bones Mackay, who busted Brewer:

“Guys, Oliva Pinto’s caddie climbed down into the bunker, knelt down and felt the surface of the sand with his hand, trying to determine the kind of depth there,” Bones reported.

When confronted with the potential rules violation — testing the surface of the bunker — Brewer shook his head. “I didn’t,” he said, several times. Eventually Strafaci Jr. chimed in.

“Yes you did, you touched the sand. You reached down and brushed the sand!”

Eventually television technology gave the shady proof that Brewer had indeed bushed the sand with his hand.  Clear evidence.  It was loss of hole for Pinto and loss of reputation for Brewer.

The USGA rules officials declared the infraction, which resulted in loss of the hole for Pinto, handing a one-up victory to Strafaci, who went on the win the championship.

As for Brewer, he’s sentenced to the DogLegNews Dog House where he can go outside and test the sand all he wants.