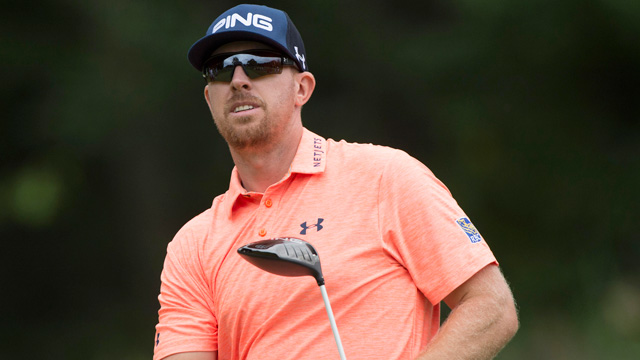 Hunter Mahan was once a top player on the PGA Tour.

So what’s with this tag — Web.com Tour Finals?

Four events and a chance to get AWAY from the Web.com Tour.  Kinda like wanting out of junior high and in to high school.  Or how about out of high school and in to college?

So all the flunkies from the PGA Tour, you know, the guys who didn’t make the top 125 are at the Nationwide Children’s Hospital event up there in Columbus, Ohio, the town built by Jack Nicklaus and Ohio State University.  Speaking of Ohio State, they’re playing at OSU’s Scarlet golf course,  one of the best collegiate courses in the world.

You’ve got the Top 25 from the Web.com money list, those guys have already earned their PGA Tour cards for the 2018 season.  Those players will try and improve their place on that list, it will get  them into more events next season.  Then you have the guys who have basically lost their cards.  That would be guys like Hunter Mahan.  Mahan’s fall from prominence has been eye-rubbing.  He was once one of the top five players on the PGA Tour.  Now it’s nothing but misery for Mahan.

Mahan shot 68 on Thursday and that left him three off the lead of Keith Mitchell.

So what you have here are 16 rounds that have replaced the old PGA Tour Qualifying School.

Goal is to be one of the Top 50 after these four events to get back on the PGA Tour.

No, this is not the Web.com finals.

These guys want OFF the Web.com.

The only guys who want to get on the Web.com are the rabbits out there who have no place to play.