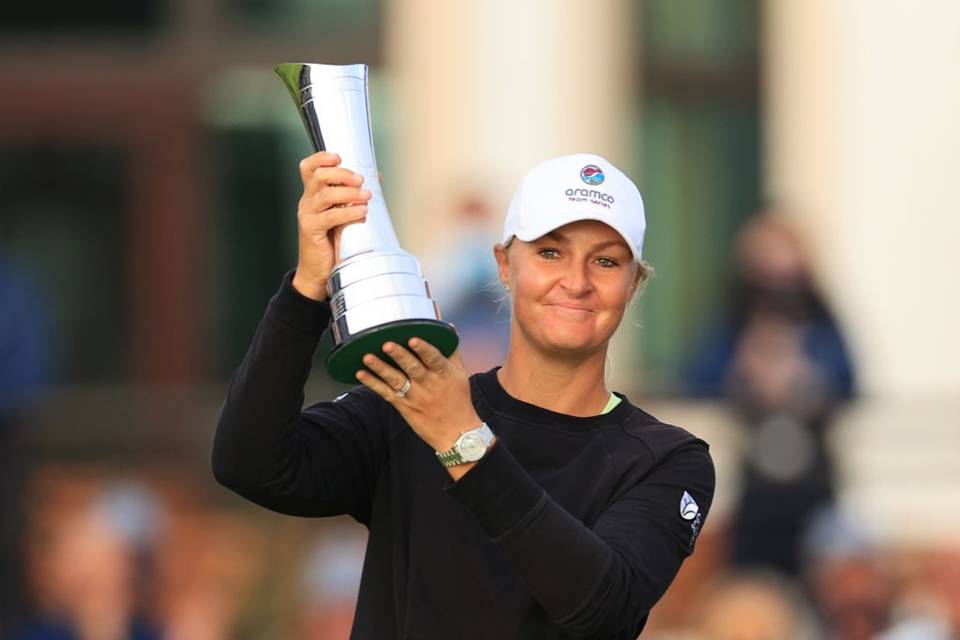 Anna Nordqvist's experience showed down the stretch as she took her third major.

When Carnoustie Got Tough — So Did Open Winner Anna Nordqvist

No matter how easy or how hard it might play — historic Carnoustie has a way of separating the worthy from the unworthy and by time the final twosome of Anna Nordqvist and Nanna Koerstz Madsen arrived at the 72nd and final hole of the Women’s Open, the iconic course rolled up its sleeves and went to work.

After a half-dozen or so contenders came and went on a sunny Scotland Sunday — it was Nordqvist and Koerstz head-to-head with 427 yards to the ultimate prize in the season’s final major.

Nordqvist had that certain look about her, the kind you see from a player who has multiple major championships on the resume.  The tall Swede launched a perfect tee shot, high with a slight draw that took it away from the deadly pot bunkers right of the fairway.  Madsen followed her and took hers down the center with a draw and it would settle in the first cut, just off the fairway, no problem.

There was a huge experience gap between that final pair.  Nordqvist, with eight LPGA Tour wins, including the 2016 U.S. Open and the 2017 Evian, showed the demeanor you’d expect from a veteran, especially a veteran with major championships.  Nordqvist hit first and launched a solid four-hybrid from 222-yards out that settled just 25 or so feet from the hole.  Then it was Madsen’s turn.

Perhaps it was the inexperience of zero victories, perhaps it was the ghost of Jean Van de Velde invading her mind.  Whatever it was, from 178 yards out, the 26-year-old from Denmark totally fanned a five-iron, losing it well right.  Good news is that it cleared the Barry Burn, burial ground of Van de Velde in 1999.  Bad news is that it settled in the back of that large bunker to the right of the green. The up-and-down for par looked like a formidable challenge at best and par exited the grounds when Madsen shanked (yes, the dreaded s-word) her bunker shot and watched it sail long an into the thick stuff just short of the out-of-bounds wall.  From there he par chances were slim and none and slim was already at the nearest pub, chugging down a pint.  For the record, her fourth came up nine feet short and the deflated Dane missed the nine-footer for bogey.  She finished with 71 and dropped back to 10-under par.  Good news is that her double-bogey nipped Van de Velde by a shot.

Nordqvist was all smiles as she narrowly missed her birdie putt, leaving herself a five-inch tap-in for the championship and the fat $870,000 that goes with it (thank-you AIG).

Nordqvist shot 69, a nice follow-up to her Saturday 65 that shot her to the top of the leaderboard with Madsen after three rounds.  The Swedish star’s winning total was 276 — 12-under on a Carnoustie layout that had virtually no wind for three days and a slight breeze that made things a bit more interesting over the final 18 holes.

Hall had her chances but when she missed her birdie putt at the 18th and shot 67, the look on her face said she knew she needed that last birdie.  Somehow she knew 11-under wouldn’t make it.

Same for Sagstrom, who hung around the entire week and shot 68 on Sunday.  She’ll look back at her bogey on the 72nd hole and know it cost her a shot at a playoff and perhaps her first major.

Salas once again hung in there without the kind of firepower it takes to win a major these days.  Hybrids into too many par fours make it tough to find birdies.  Lizette had three on Sunday and a clean scorecard and a round of 69.  Nice work for the determined American but once again, she got a taste of a major, but that’s it, just a taste.

Minjee Lee tried to mount another final round comeback the way she did at The Evian last month in France.  But her 66 wasn’t enough and she finished at 10-under along with Madsen.

I’ve been waiting for this for a while,” she said after a congratulatory hug and kiss from her husband, whose family lives just 20 minutes from Carnoustie.  “I haven’t won one in a couple of years. There have been a lot of downs since then, which makes it even sweeter,” the champion said..

Anna called Carnoustie “a special place” and she was spot on with that.

It is a special place, one of those that separates the champions from the rest.

Just like it did once again on a sunny Sunday in Scotland.