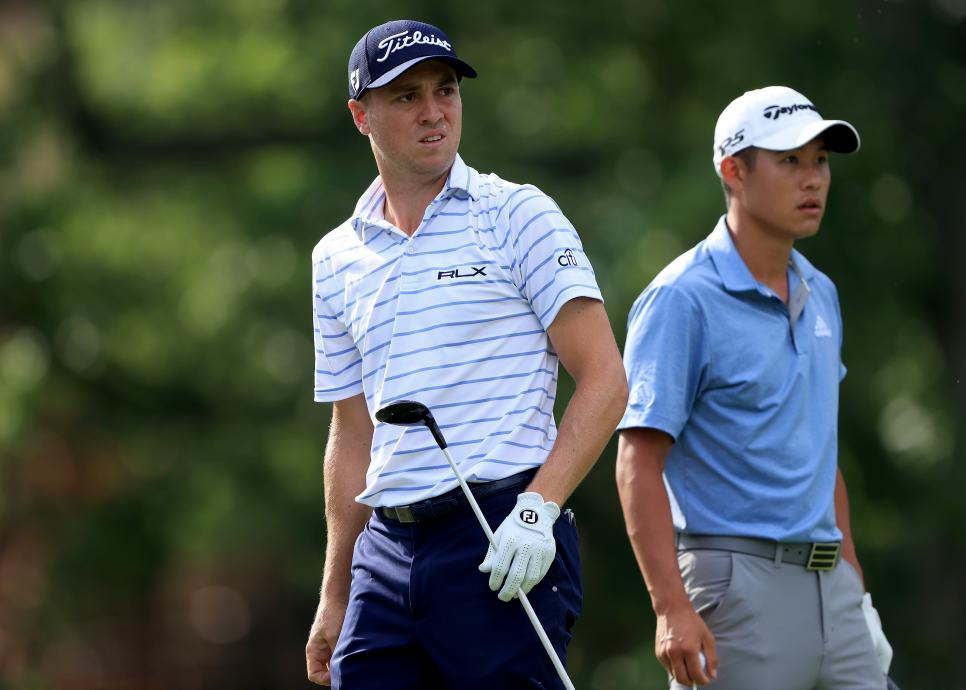 Collin Morikawa made up three shots on Justin Thomas over the final three holes.

For Collin Morikawa, it was a spectacular day to remember.

For Justin Thomas, it was a day he’ll want to forget.

The Workday Charity Open was one tough work-day for Morikawa and Thomas as the pair fought tooth and nail down the stretch at Muirfield Village Sunday and 72 holes wasn’t enough to crown a winner.

“It was crazy,” was how Morikawa described what transpired Sunday morning and carried into the afternoon at Muirfield Village.

It was then that Thomas started a run that showed why he has 12 Tour wins and a major championship.  He birdied 10, 11, 14 then reached the par five 15th in two, his second settling just 23 feet from the hole.  He rolled that big putt in and seemingly took command of the tournament.   The eagle got him to 21-under and he was three clear of Morikawa and a whopping six shots better than Hovland.

It was then that things started to go south for Thomas.  At the par three 16th, he missed the green, failed to get up-and-down, made bogey and saw his lead over Morikawa shrink to two with two to play.  At the 481-yard 17th, Morikawa his his approach to 14-feet from 183 out.  He ran the birdie putt in and with Thomas making par, cut the lead to one with the 18th to play.

Morikawa’s drive at 18 was perfect.  Thomas flared his three-wood right, into a bunker. His approach came up well short and his pitch left him a nervous downhill 10-footer for par.  Morikawa two-putted from 17 feet for par then Thomas saw his par effort wiggle to the right and miss.   J.T. had blown his three-shot lead.

The first playoff hole, was, as Morikawa put it, “crazy.”  Thomas, after a tough approach from the rough on the hill right of the fairway, left himself 50 feet from the hole while Morikawa’s approach was 24 feet away.  Thomas then watched his crazy-long attempt for birdie track perfectly before finding the bottom of the hole.  Unfazed, Morikawa calmly ran his 24-footer in to send the playoff back to 18 tee.  Had there been a crowd, it would have been in a frenzy.

The second trip down 18 saw both hit the green with Morikawa 25 feet away while Thomas’ approach hit just a foot past the hole and stopped 12 feet away.  After Morikawa missed, Thomas lined up the winning putt but missed, barely.

The roof finally fell in on Thomas at the 10th, the third playoff hole.  His tee shot sailed right and settled in the rough behind a small tree — he was basically stymied.  Forced to pitch out, Morikawa hit a beauty to nine feet while Thomas’ third left him 15 feet away.  He missed his par and that was the end.  Morikawa’s birdie putt missed, barely, but a five-inch tap-in produced his second Tour victory.

As for Thomas, it was a crushing loss.  J.T., naturally, wasn’t really happy with his performance down the stretch.

“I’m pissed off.  I’m disappointed. I’m upset.  I have to finish better, that’s not acceptable.  If I just play the last three one-over, I win,” Thomas said not holding back.

How long will it take to get over the loss?  “I hope about three or four days because I’ve got to start another tournament on Thursday. I’m playing great. I have a great chance to win another golf tournament next week at a course that I obviously enjoy and I’m playing well.  I just can’t beat myself up, although it’s going to be pretty hard not to, at least the rest of this afternoon. But there’s a whole lot of nothing I can do about it right now. I just need to execute better when I get in that situation in the future.”