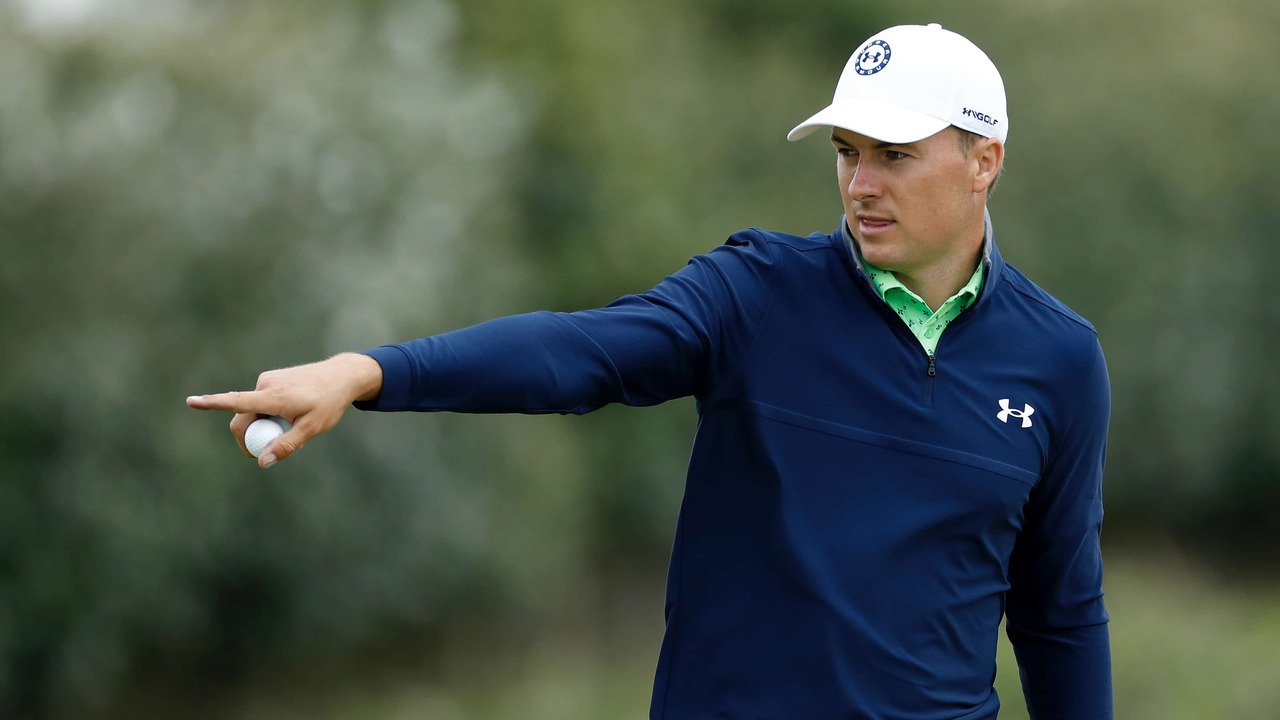 Jordan Spieth is the last American to win the Open Championship.

149th Open Championship: A Beautiful Morning For Oosthuizen (64) And Spieth (65)

It was a remarkably sunny, relatively calm Thursday morning on the grounds of Royal St. George’s when the 149th Open Championship began and it turned out to be an especially beautiful morning for Louie Oosthuizen and Jordan Spieth — two men who know what it takes to hoist the Claret Jug.

The wind was just whispering its way through the dunes and fairways on this historic course outside the English seaside town of Sandwich.  It was a softer, gentler version of the course that can be a total beast when the winds howl and the ground turns firm and fast.

Oosthuizen and Spieth took total advantage of incredibly good scoring conditions and both put up rounds that took them to the top of the Open’s traditional yellow and red scoreboard.

Spieth finished first with a five-under par 65 that saw him making putts like the Jordan Spieth who won three major championships, including the 2017 Open championship at Royal Birkdale.  Spieth found fairways and made putts, avoided wild drives and simply got it around like he used to.  By the time he finished there were six birdies, a single bogey and 11 pars on his card.

Spieth has found a liking for links golf and it showed once again on day one.  “From the time I first came here I’ve always loved links golf.  I think it brings a lot of the feel aspect into the game,   I think I shorten swings up over here and hit more punch shots and just stuff that I probably should be doing at home when I’m trying to – you get less swing-focused and more shot-focused over here because the second you take your brain off of what you’re hitting, you may not find your ball.  Instead of just a driving range shot in Palm Springs, there’s always some shot you have to play that gives you a little bit of an advantage or certain club selections based on you hit a fade or a draw; they go 15 to 20 yards different distances than between which shot you play,” Spieth explained.  “I guess to sum that up, there’s a lot of external factors over here, and I think that external is where I need to be living.”

Spieth was living large and and he sounded confident.  “I feel good about my chances going forward.  I like where I’m at.”

Oosthuizen couldn’t help like where he finished as well.  His scorecard was unblemished.  He finished shortly after Spieth and registered the lowest round of the day — a six-under par 64 — six birdies, no bogeys.  “It was a good round of golf,” Louie said, perhaps issuing the understatement of the day.

Oosthuizen played with world’s No. 2 Jon Rahm, who beat him by a shot to win the U.S. Open at Torrey Pines last month.  “Around this course you have to be so patient,” Oosthuizen observed.  “So much can happen over the last three or four holes (on the final round), so there’s a long way to go.  For the record, Louie cut the U.S. Open champ, Rahm, by seven shots.

Louie and Jordy were just two of the 47 players who had it in red numbers from the morning wave as early winds didn’t get much stronger than 10 miles per hour and as Spieth pointed out:  “If anything — just a bit of softness,” he said, referring to the greens.  Spieth had company at five-under with lefty Brian Harman.  Harman got off to a birdie-birdie-birdie start then added two more before the turn.  A bogey at the ninth kept him from shooting 30 going out.  He was only one-under on the inward nine but that was good enough to tie Spieth.

The afternoon presented a different challenge.  As often happens at Open Championships, those in the second wave found the winds picking up and freshening to 20 miles per hour and the parade of red numbers came to a screaming halt.  The afternoon medalists with four-under par 66s were Benjamin Hebert, a Frenchman who struggles on the European Tour and former U.S. Open champion Webb Simpson, who played his best golf of the season.

There were afternoon disasters.  PGA champ Phil Mickelson will be heading home after Friday’s second round.  Lefty floundered in all aspects of the game and after finishing his day with a double-bogey six at the 18th, he signed for 80 and was tied for dead-last with some guy named Deyen Lawson.

These Open championships sometimes come down to being on the right side of the draw.  Spieth and Oosthuizen will go out late on Friday and they’ll be hoping the winds aren’t as brisk as Thursday afternoon.

But as Louie said after his remarkable start — there’s a long way to go.

Friday Morning Update — Breaking News:  2020 PGA Champion Collin Morikawa flirted with history as he went out early and was seven-under par through his first 14 holes, looking for an historic round;  His iron shots were laser-like but at the 15th there was finally a hiccup as he missed the green short right, chipped to four-feet and missed the par putt.  Two-putt pars followed at 16 and 17 and after a perfect drive at 18, he stuck his approach to six feet.  Morikawa missed the birdie putt for 63 and a 130 total but his 64 tied Oosthuizen’s first round effort and his 131 total put him atop the scoreboard at nine-under par and set a mark for the rest of the afternoon starters to shoot at.  South African Daniel Van Tonder shot 66 and got to six-under, tied with Oosthuizen, who was going out in the afternoon wave.  Morning conditions were very much like they were on day one when 47 players shot under par.

After his round, Morikawa credited playing in last week’s Scottish Open for helping him prepare for this week:  “Without the Scottish (Open) I wouldn’t be where I am today.  I was just trying to make a lot of birdies.  When you drive it in the fairway, you can attack a lot of these pins.  I was aggressive.  Hopefully we’re coming down the stretch on Sunday.”  As far as his attempt to become the first player in history to win two majors in his first try, he credited his preparation skills:  “For the past few years, we’ve been showing up at courses (preparing) and that’s what we do.”

Shortly after Morikawa finished, Emiliano Grillo posted the day’s second 64.  He nearly holed his approach into 18 for eagle two and left himself a one-foot tap-in for his six-under round and he was in at six-under with Van Tonder. Grillo shot a five-under par 30 over the inward nine.