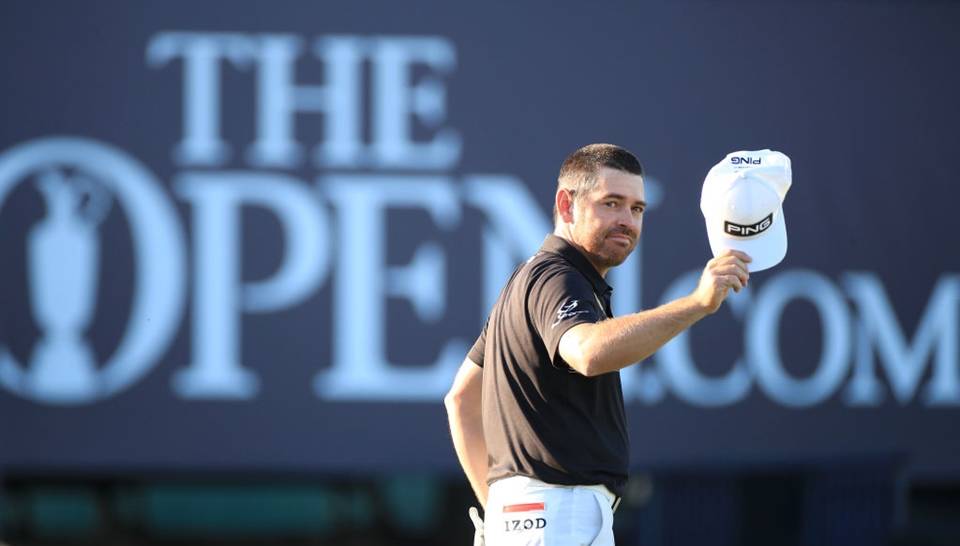 Royal St. George’s was totally defenseless on Friday with no wind and the world’s best players showing their stuff — Louis Oosthuizen was the best of all, adding a 65 to his opening 64 to set a new scoring record at the 149th Open Championship.

When his day started, he was three shots back of Collin Morikawa. Morikawa, the fourth-ranked player in the world, went out early and added a six-under par 64 to his first round 67 and was in at nine-under par 131.  “I was just trying to make a lot of birdies,” Morikawa said when he was done.  “When you drive it in the fairway you can attack the pins.  I was aggressive.”

With no wind to speak of all day, Morikawa figured his lead wouldn’t stand and it didn’t.

Two birdies on the outward nine got Oothuizen to eight-under.  He went on a three-hole run starting at the par four 12th where he made birdie.  He added another at 13 then hit the par five 14th in two and holed an eagle putt from 18 feet.  At that point he was 12-under for the tournament, six-under for the round.  He had yet to make a bogey in the championship but that streak came to an end at the 15th where he found the greenside bunker that devoured Thomas Bjorn in 2011.  Louie blasted to seven feet but missed his par putt.

In all, the 38-year-old South African has 24 pars, one eagle, 10 birdies and a lone bogey on his card for the first two rounds.

Jordan Spieth shot 67 to go with his Thursday 65 and he’s in at eight-under, 132.  “The course was easier this afternoon than it was yesterday (Thursday) morning,” Spieth said.

It certainly was.  Without the wind and with the fairways firming up, the course played more like 6,600 yards and it was a birdie-fest all day.

Here’s how they’re lined up behind Oosthuizen, Morikawa and Spieth:

Dustin Johnson (68-65):  D.J. made his move Friday with seven birdies on his card.  The last thing the leaders want to see is the world’s No. 1 heating up and moving up the scoreboard.

Dylan Fritelli (66-67):  Got into the field as an alternate and has taken advantage of his good fortune.

Scottie Scheffler (67-66):  Has yet to win but is an enormous talent who has been a regular contender on the PGA Tour this season.

Daniel Van Tonder (68-66):  Went out early Friday and shot his best-ever round in a major.  He won for the first time this year on the European Tour, another talent from South Africa.

Andy Sullivan (67-67):  Was one of the top players in England but has been in a long slump.  He picked a good week to break out of it.

Marcel Siem (67-67):  Easily stands out from the crowd with his “Man Bun” hair.  Leads the field in fist-pumps this week.  European Tour player from Germany who has been in a slump like Sullivan, but like Andy, picked the right week to get his game going.

Brooks Koepka (69-66):  Holds that all-time record for low 36-hole score in a major (128) and it still stands after Louie’s less-than-spectacular finish on Friday.  Will be interesting to see what he does on “Moving Day” Saturday.

Jon Rahm (71-64):  World’s No. 2 got himself back in the hunt after tying Morikawa for the low round on Friday.

There are another seven players at four-under par and a total of 64 players at even par or better.  A low round on Saturday can move just about anyone into contention.

The field set a first round scoring record on Thursday and another for Friday’s second round.

No wind, sunny skies, balmy temperatures, a 7,000-yard firm course — a formula for a Birdie-Fest and that’s what it’s been through two days at Royal St. George’s.