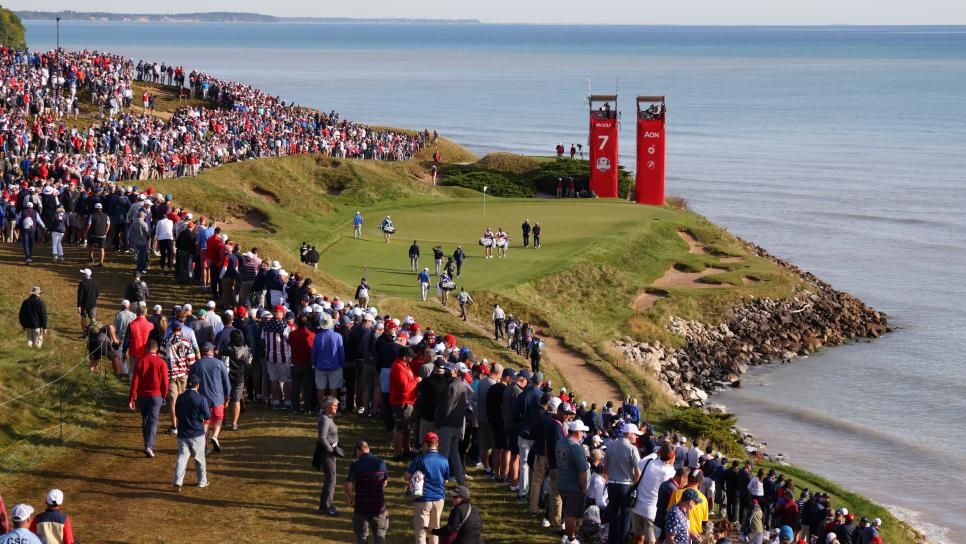 The United States team got off to a dream start Friday at the Ryder Cup, basically stepping on the collective necks of the Europeans and finishing the day with a 6-2 lead, it’s best start in 46 years.

Suffice to say the Euros won just one match out of the eight first day matchups and that came when Jon Rahm and Sergio Garcia went out in the first Foursomes (alternate shot) match and beat Jordan Spieth and Justin Thomas, 3-and-1 — that that’s it — the ONLY Euro win.  The other point came from a pair of afternoon (best-ball) ties.  Rahm and Tyrrell Hatton tied Bryson DeChambeau and Scottie Scheffler when Hatton rolled in a six-footer for birdie at the 18th.  Hatton and Hovland came from behind and squeezed out a tie with Justin Thomas and Patrick Cantlay.

The European “Old Guard” of Lee Westwood, Ian Poulter and Paul Casey all went 0-2 as did Rory McIlroy as the U.S. was dominate.  Dustin Johnson played well, earning two points as he partnered with Xander Schauffele in best-ball and Collin Morikawa in alternate shot.  Schauffele went 2-0 as well.

What stood out on day one is that U.S. Captain Steve Stricker shuffled his pairings even though the morning pairings brought him three of the four available points — he went out with entirely different teams in the afternoon and it worked just as well, getting another three of the four possible points.

“We were trying to give everybody a little bit of rest along the way,” Stricker said. “That was part of it. Just making sure guys get their rest.  It’s a big course. Tough conditions this afternoon. Guys from both sides looked whipped after playing 36 holes.  A big key is to make sure these guys are rested and ready for Sunday as well. You have 12 points on Sunday.  Sunday is a big day.”

On Saturday morning, Stricker went with the same Foursomes (alternate shot) lineup as the Friday morning session:  Patrick Cantlay and Schauffele together, Spieth and Thomas teaming up again, as well as the teams of Brooks Koepka-Daniel Berger and Dustin Johnson-Collin Morikawa.

Most embarrassing performance from the Europeans came in the morning alternate shot when Cantlay and Schauffele went out and won the first five holes from  Rory McIlroy and Ian Poutler.  McIlroy’s day one performance left him sidelined on Saturday morning.

If the European team cannot flip the script on Saturday, this one could be all but over heading into the Sunday singles where the U.S. looks incredibly strong.

The U.S. needs only 8 1/2 points over the next two days to win back the Ryder Cup.