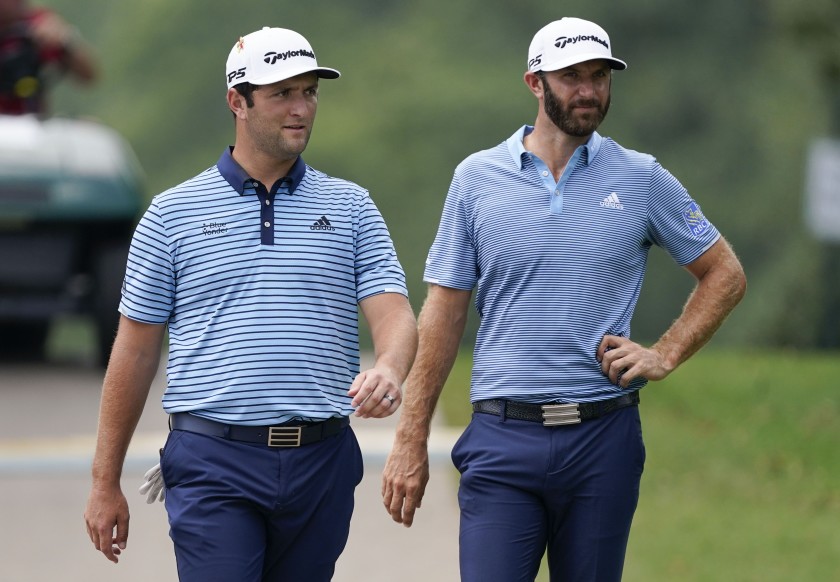 World's No. 1 Dustin Johnson and No. 2 Jon Rahm are in the thick of it.

They’ve made it to the weekend, 36 tough holes to go at the 84th Masters and it’s a leaderboard like no other — the world’s top three players — Dustin Johnson, Jon Rahm and Justin Thomas, numbers one through three, are all tied for the lead at nine-under par along with surprise contenders Abraham Ancer and Cameron Smith.

First-time ever, in any major championship that the world’s top three are tied for the 36-hole lead.

Defending champion Tiger Woods will start his quest for a sixth Green Jacket with some work to do.  He’s in at five-under par after following his opening 68 with a very cautious, conservative 71 that he capped off early Saturday morning.

It was more fall-like weather with temperatures around 57 degrees when they finished the second round.

Here’s a look at the halfway contenders:

Jon Rahm (69-66):  Has been the steadiest of the top three.  He waited for Saturday morning to make a four-footer for birdie at 13, good decision.  Was in trouble at 15 until he chipped in for par from the back fringe.  Credited his work earlier in the week with Jose-Maria Olazabal that helped his short game.  “Saved me a couple of shots,” Rahm admitted.  “Not telling what he talked about,” Rahm said with a grin.  Rahm has never held the halfway lead in a major.

Justin Thomas (66-69):  J.T. is looking good, short-game is spot on.  “You gotta think Augusta National is gonna get this place going this weekendl,” said J.T. in anticipation of faster, quick greens “I just need to go there and play my own game and not worry about everyone else.”

Abraham Ancer (68-67):  One of the non-bombers in solid contention after two find rounds, credits his putting for getting him a piece of the lead.  We got to know him at the President’s Cup when he asked for a match with Tiger Woods and got it, losing to El Tigre.  He’s four shots better than Tiger at this point.

Cameron Smith (67-68):  The young Aussie has gotten stronger and a little longer and that’s paid off for him.  Solid game and he’ll have to make up for a lack of experience as the greens get faster and faster over the final 36 holes.

Patrick Reed (68-68):  Might be the biggest threat to everyone.  His short game has been it’s usual magnificent self and that will keep him in the hunt for a second Green Jacket.  “The goal was to get to seven or eight under,”  he said afterward.  Goal accomplished!

Patrick Cantlay (70-66):  Steady Eddie with the best poker face in golf.  Will have to handle the faster green speeds to stay in contention.

Sungjae Im (66-67):  Golf’s workaholic.  Plays every event, every week and one of the first-timers near the top along with Ancer.

Danny Willett (71-66):  The 2016 Masters champ hadn’t made a cut since donning the Green Jacket.  He finally has.  Resurrected his game the past 24 months on the European Tour.  Another non-bomber in contention.

Tommy Fleetwood (71-66):  Best showing ever.  He hasn’t played well here until this week.  Putting might be an issue for him as the greens get faster.

Sebastian Munoz (70-68):  Has been contending the past couple of months on the PGA Tour, lack of experience at Augusta National may show over the final 36.

Louie Oosthuizen (68-70):  Finished Saturday morning.  His tempo and smooth swing are incredible.  Needs a good round to get near the leaders.

There are six players at five-under par — 139 — biggest of them is the biggest of all — five-time champion Tiger Woods.  Woods had to hit that difficult second shot into 11 to start his day and finished the back nine in one-under par with his stellar short game on total display.  He’s in with rounds of 68-71.  “They definitely have the greens faster than yesterday,” Woods observed after finishing.  He acknowledged a long Saturday ahead:  “East fast, change clothes and get after it,” Woods said.

What about Bryson DeChambeau?  He met his Waterloo on Friday with a lost ball on the short, 350-yard third that led to a triple-bogey.  He followed that up with two straight bogeys on his way to a 74 that left him at even par 144, barely making the cut.

The 36-hole cut came at even-par 144 with 60 players making it to the final two rounds.