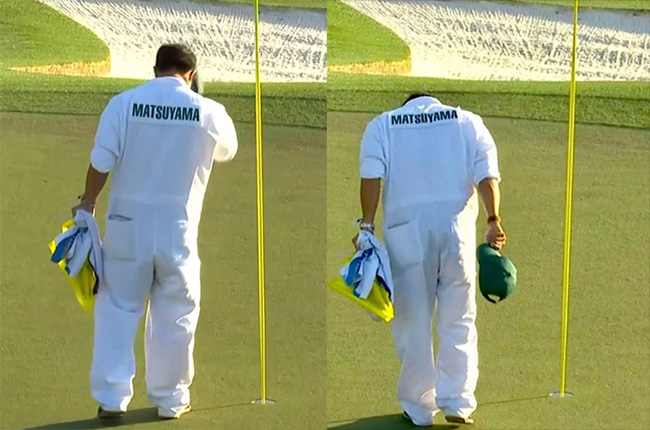 Hideki Matsuyama's caddie making a respectful bow at Augusta National was one of the cool 2021 images.

We will remember 2021 as an absolute cool, interesting year when it came to the four major championships — The Masters, The PGA, The U.S. Open and the 149th Open Championship.

They were all amazing and memorable, especially for the men who won them.

So as we prepare to bid farewell to the year that was, let’s take a look back at the tournaments everyone looks forward to.

Hideki Matsuyama carries a heavy weight on his shoulders.  In his homeland — Japan — it’s a golf-crazed nation.  Expectations on Hideki have been sky-high since he turned pro.  He became the first player from his country to win The Masters, to win any major championship.  He shot rounds of 68-71-65-73 — 10-under par and edged game Will Zalatoris by a shot.  Hedeki was three shot back of 36-hole leader Justin Rose.  Rose got all the first-day attention with a dazzling 65 and a an even par round on Friday put him at the top with two rounds to go.  Matsuyama basically won it with a sensational 65 on moving day then hung on over the final 18.

Zalatoris was a steady-eddie.  He should rounds of 70-68-71-70 to finish nine-under.  Amazing considering what a sub-standard putter he is.

Jon Rahm’s 66 was the best Sunday performance of anyone in the field.  He was even through 54 and finished tied for fifth with Marc Leishman at six-under.  First round leader Rose failed to shoot under par in any of his final three rounds and finished solo seventh.  Rahm’s solid play was perhaps a foreshadowing of what was to come at Torrey Pines in June..

Coolest image from the season is captured above, Hideki’s caddie removed the flag from the flagstick at 18 (tradition — it belongs to the winner’s caddie), took off his cap, turned toward the 18th fairway and bowed to the course in a show of respect.

Who knew Phil Mickelson would emerged as the oldest-ever player to win a major championship?  Lefty was a 300-to-1 underdog at the start of the week on the spectacular Ocean Course at Kiawah Island.

The Ocean Course is one of the toughest sea-side venues in America and once again it lived up to its reputation.

After rounds of 70-69, Lefty found himself five-under, tied with Louie Oosthuizen with the ultra-tough major competitor — Brooks Koepka, just a shot back at four-under.

Phil’s Saturday 70 earned him the 54-hole lead at seven under with four-time major champions Brooksie (six-under) and Oosthuizen (five-under), lined up behind him.

Sunday’s final pairing was Mickelson and Koepka with most thinking Koepka would overtake Mickelson and win a fifth major.  But it didn’t turn out that way.  Phil overcame back-to-back bogeys at 13 and 14 by nearly holing his third at the long par five 16th.  That got him back to even-par for the day and set the stage for his victory.

Koepka found himself four-over through 13 holes and a pair of birdies at 15 and 16 were too little, too late.  Hey Brooks, winning majors isn’t easy.

As for Louie, a double-bogey at the par four 13th ended his hopes as he finished with 73, Koepka 74 and they tied for second at five-under.

Phil bogeyed 17 but a closing par had him hoisting the Wanamaker for his sixth major championship and at age 50 (two weeks shy of 51), he easily blew away Julius Boros (48) as the oldest player to win a major.

Torrey Pines proved the perfect setting for Jon Rahm.  Rahm has had a love affair with the South Course and it embraced him once again as he became the first player from Spain to win the U.S. Open.

Louie Oosthuizen was the 36-hole leader at four-under followed by Rahm and Xander Schauffele at three-under.

On Saturday, Louie’s 70 got him into the 54-hole lead at five-under followed by Rahm and Rory McIlroy at three-under and Scottie Scheffler at two-under.

Rahm put on a Sunday show.  He was two-under for the first nine and tied Oosthuizen at five-under heading to the final nine.  Birdies at 17 and 18 won it for Rahm as he posted 67 and six-under to beat Oosthuizen by a shot.  Louie’s birdies at 10 and 18 were offset by bogeys at 11 and 17.  His even par 71 left him a shot short of the Spaniard.

Rahm paid tribute after the win to his late countryman and Spanish legend, Seve Ballesteros:

“This was definitely for Seve.  We talk about him at the Masters.  But I knew he tried a lot — he wanted to win this most of all.”

There was no 2020 Open Championship, it was wiped out by the COVID pandemic, which hit Europe particularly hard.

Royal St. George’s had to wait a year and when July rolled around, the wind didn’t show up and the course was defenseless.

Louie Oosthuizen was once again looking great, he was having a super season in the majors.  He was on record pace — 11-under par through 36 holes after opening with rounds of 64-65.  He was two in front of young Collin Morikawa, who was also having a good major season.  Collin was a nine-under through 36 after rounds of 67-64.  Jordan Spieth, who has one Claret Jug, was in at eight-under (65-67) while U.S. Open champ Jon Rahm was sitting a minus-five (71-64).

Louie cooled off with a Saturday 69, opening the door for the other contenders.  Morikawa’s 68 left him just a shot back (11-under) heading into the final round while Spieth sat at nine-under (69) and Rahm at seven-under (68).

Morikawa led the way on Sunday, coming home with a 66 to shoot 15-under.  He was the man who kissed the Claret Jug and took his second major championship with a 15-under par total.  Spieth also shot 66 to finished runner-up at 14-under while Rahm’s closing 66 tied him for third with Oosthuizen, who could do no better than a one-over par 71 to finish at 11-under with Rahm.