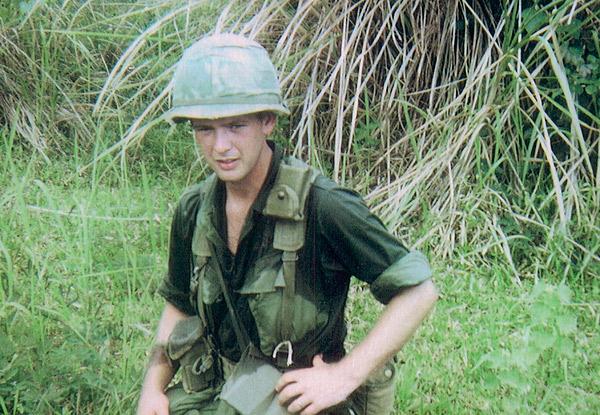 21-year-old infantryman Larry Nelson in the danger-filled jungles of 1968 Vietnam.

A Military Tribute — For The Deserving Larry Nelson

The PGA Tour begins its 2019-2020 season this week with  A Military Tribute At The Greenbrier.

Today we will present you with a fitting, highly-deserved Military Tribute.

The year was 1968, the Tet Offensive had begun and for those not old enough to recall, that was when all hell broke loose over there.  A young man from Fort Payne, Alabama, was drafted into the United States Army and suddenly Larry Nelson found himself in circumstances no one would want.

“It was right after the Tet Offensive began and we didn’t know what we were getting into,” Nelson recalled a few years ago when he spoke of his time in that war.

He was an infantryman and had to smarts to excel at reading maps and that’s how our guys got around over there.  No GPS, no fancy technology.  Read a map, hope to survive.

And that map-reading skill put Nelson even closer to the thick of it.  “We walked the point area because of my ability to read maps,” he remembered.  Nelson hated taking his platoon on the trails.  Deadly booby-traps were abundant.  “We had to cut our way through a lot of stuff — didn’t like walking the trails.”

Nelson came to know the difference between the sounds of an AK-47 round and a carbine round.  The North Vietnam Regulars packed the 47s, the Viet Kong used more carbines.  Both came too close for comfort on too many patrols.

Fear was everyone’s constant companion.  Nelson’s most frightening patrol came when he had a group of just 12 men — out on night ambush patrol.  “We were settled in for the night, just off the trail, most of the guys were sleeping and suddenly there were about 100 NVA walking down that trail in the dark.  I was concerned someone would wake up, make noise or simply open fire.  We would have been wiped out.  That was the most afraid I was at anytime because we could definitely have been overwhelmed.”

Nelson is a quiet man.  It was an honor to know him during his early time on tour.  He was only a year older than a certain young golf writer for the Tampa Tribune.  It’s easy to understand now and know why he had that quiet demeanor.

He was lucky enough not to suffer from PTSD but did admit that just after he made it back home, loud noises would make him hit the floor.

“We knew the war was not to win.  It was ridiculous to be over there,” Nelson said.  “We were just trying to get home.”

Nelson made it home and learned to play golf from  Ben Hogan’s Five Lessons,  one of the most-read instruction books of all time.

Larry had a classic swing that served him well.  It was good enough to win two PGA Championships and one U.S. Open.

Nelson also suffered one of the greatest wrongs in the history of golf.  After winning not one but two PGA Championships, the PGA Of America never saw fit to name him a Ryder Cup captain.  He was good enough to lead men in war, but not good enough to lead golfers?

That’s a snub the PGA Of America can never make right.

But today, we pay tribute to Larry.

Arnold Palmer would have turned 90 on September 10, Tuesday of this week.

We should all salute and honor him along with those served and made it home and those who lost their lives in Vietnam.

Yes, that’s the sort of Military Tribute that makes the most sense.

Thank-you, Larry Nelson, for your service to America and your example of what a major champion should look like.