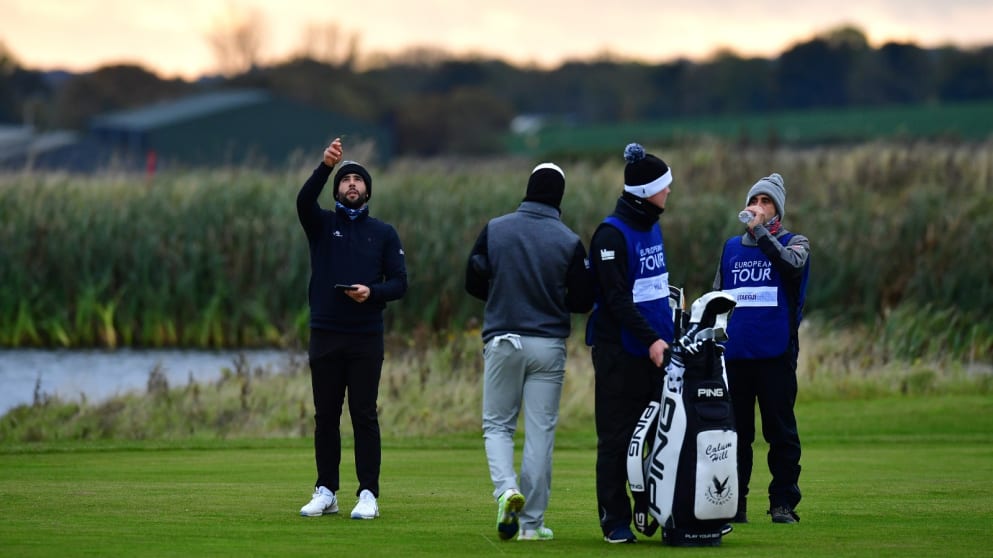 Adrian Otaegui (far left) and the rest of the field were dressed for cool weather.

Adrian Otaegui was in a class of his own on a chilly Thursday on the Fairmont Links, just down the road from the Old Course at St. Andrews.

He came up with 10 birdies and tied his career low of 62 to grab the day one lead at the Scottish Championship.

Otaegui, who own two European Tour wins, is a protegee of Hall of Fame player Jose Maria Olazabal, a fellow Spaniard.  He got his day started the right way with three birdies as he started at the 10th hole.  He then birdied three of the final four on that side, going out in 30.  He came home with four more for a 32 and his 10-under effort was three better than England’s Matt Wallace and South African Bryce Easton.

“I started with three birdies and actually there were two birdie holes that I didn’t birdie – the fourth and sixth – but then obviously I made some very good birdies on some other holes,” Otaegui said after a good day’s work.   “I putted really well, I also played very well from tee to green and felt confident and relaxed – 62 is really, really good.”

England’s Aaron Rai, who won the Scottish Open two weeks ago and has been on a tear lately, was one of four players in with 66.  His day started with a bogey at the 10th hole but he closed out his first day with birdies on four of his final five holes.  Joining him in a foursome of players with 66 was European Ryder Cup captain Padraig Harrington.

Lee Westwood continued his resurgence with a five-under par 67.

Friday Second Round Update:  Matt Wallace jumped up the scoreboard with a 67 on Friday to get to 12-under and tied for the lead with first-round leader Adrian Otaegui, who cooled off considerably with a two-under par 70.  Aaron Rai continued his great play. His 67 got him to 11-under at the halfway mark.

Sei Young Kim’s victory at the Women’s PGA Championship last week lifted her to No. 2 in the Rolex World Rankings.

Nelly Korda fell to third while Inbee Park moved up to the No. 4 spot.  American Danielle Kang fell from third to fifth with Nasa Hataoka at No. 6, Canadian Brooke Henderson at No. 7.

Lexi Thompson stayed in the top 10.