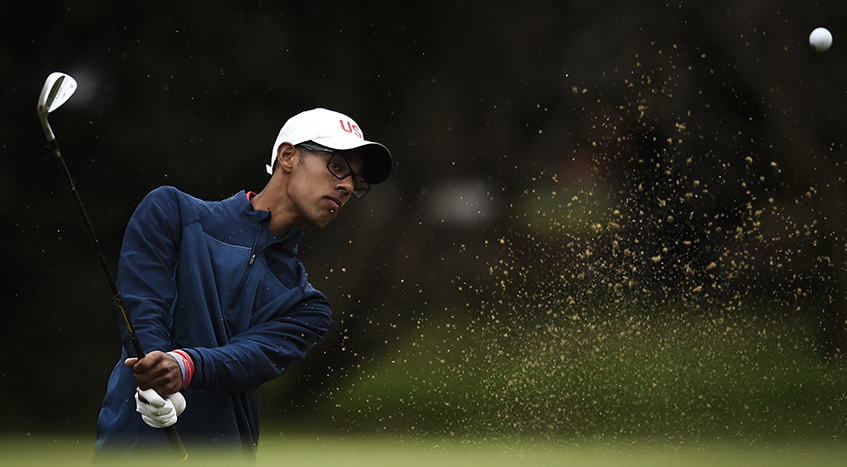 Akshay Bhatia raised a lot of eyebrows when he decided to forego college golf and turned pro at age 17.  On Thursday at Pebble Beach, he pulled off a pretty rare feat on his way to an opening 64 that left him just two shots behind first round leader Pat Cantlay.

“I just put in good work the last few days,” said Akshay, who is trying to play his way to full Tour status.  He took advantage of the calm conditions at Pebble Beach and that’s a must as the weather is expect to deteriorate into less-than-perfect conditions as the AT&T Pro-Am heads for Friday and the weekend.

The young left-hander said the scenic vistas at Pebble kept him in a good frame of mind.  “The views help — I look out on the ocean and my mind just goes blank.”  He’s playing in this event on a sponsor’s exemption.  His 64 marked his lowest score in 26 PGA Tour rounds as a professional, it was the 10th time in his 11 Tour starts that he’s broken par in the opening round since turning pro. Bhatia shot a pair of 66s in September at the Safeway Open, where he had his best finish — a tie for ninth and cashed a check for $166,650.

Kamaiu Johnson was looking forward to his first PGA Tour event at The Farmers but a positive COVID-19 test knocked him out of the field.  He was given a sponsor’s exemption into the AT&T this week and his debut at Spyglass Hill was a day-long struggle.

Johnson plays on the APGA mini-tour and is a brand ambassador for Farmers Insurance.  Spyglass is a tough layout, it played at least two shots harder than Pebble Beach on Thursday and Johnson finished with a nine-over par 81, placing him dead-last behind John Daly, who shot 80.

Johnson recorded eight bogeys, a double and one birdie.

Another side story is 38-year-old Kevin Hall.  The former Ohio State golfer competes on the APGA and played in the 2017 Genesis.  He’s deaf, losing his hearing at age three after suffering from meningitis.   Thursday he opened with a one-over par 73 at Pebble Beach.  Like Johnson, he’s in on a sponsor’s exemption and his 73 left him tied for 97th.