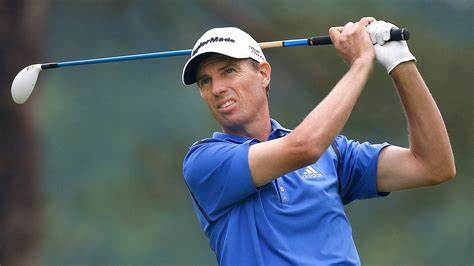 Steve Alker opened with a 64 Thursday at Benton Harbor Resort.

Steve Alker didn’t win the season’s first senior major but he’s off to a good start in the second — the Senior PGA.

Alker, who finished runner-up to Steve Stricker at the Regions Tradition, didn’t waste any time getting off to a fast start Thursday at Benton Harbor as he shot a seven-under par 64.

Alker, who is the story of the season on the senior circuit, had company at the top — Bob Estes fashioned his own 64 to share the day one lead.

“I’m playing with nice freedom right now,” said Alker, who shot his round playing with Hall of Fame members Ernie Els (67) and Bernhard Langer (68).   “Little jitters on the first tee, but I’m making birdies and being aggressive which today we could be because the greens were a bit softer and the course had softened up. It was kind of up there for the taking,” Alker said after his round.

Alker, a New Zealander, has two wins this season and leads the PGA Tour Champions money list with almost $1.2 million.  He began his day with a 25-foot downhill eagle putt on the 539-yard, par-five 10th hole after a 240-yard approach with a five-wood. He then finished his afternoon round with his sixth birdie of the day to shoot.

Alker and Estes were a stroke ahead of Paul Claxton, a club professional from Georgia, and 52-year-old Canadian left-hander Mike Weir, the 2003 Masters champion after the first round at the Jack Nicklaus-design course on Lake Michigan, the site of four previous Senior PGAs since 2012.

Minjee Lee is looking for her second straight win on the LPGA Tour but on Thursday at the ladies match play event at Shadow Creek in Las Vegas, Brittany Altomare upset Lee on day two of group play.  Altomare came from behind to beat Lee, the top-seed in the event, 2-and-1 on a hot, steamy day at plush Shadow Creek.

“I didn’t start off the way that I wanted to but, if I’ve learned anything from Solheim (Cup) the last couple years, it’s you just can’t give up because you never know what’s going to happen in match play,” Altomare said.

The winners of the 16 four-player groups will advance to single elimination at the conclusion of round-robin play Friday. Altomare (1-1) will face Youngin Chun (0-2) on Friday, and Lee (1-1) will play Caroline Masson (2-0). Masson beat Chun 2 and 1.

Jodi Ewart Shadoff followed her opening 6-and-5 victory over defending champion Ally Ewing with a 3-and-2 decision over So Yeon Ryu (0-2). Ewing beat Jasmine Suwannapura (1-1) 3-and-2.

Biggest surprise of the week was Danielle Kang, who lives in Vegas and plays out of Shadow Creek, losing both her first two match in group play, eliminating her from any chance of advancing to the knockout rounds on the weekend.  Kang has fallen out of the top 10 in the world rankings and now sits at No. 11.

Most of the big name players skipped this week’s event to prepare for the Women’s U.S. Open next week at Pine Needles in Southern Pines, N.C.

And speaking of the U.S. Open, world No. 2 Nelly Korda, the highest-ranked American player, is expected back after a lengthy recovering from surgery that was necessary after a blood clot in her arm was discovered.

This would be the 23-year-old’s first start since the beginning of February. In March, Korda was diagnosed that blood clot in her arm.

Korda, wearing a sleeve on her left arm, posted last week on Instagram a video of herself hitting a shot. She competed in the first three events of the season, finishing inside the top 20 in each one.  She missed the cut in last year’s U.S. Open at the Olympic Club.

While Nelly Korda is still in the early stages of her career, 32-year-old Michelle Wie West sounds like she’s about ready to call it a career.

Wie West, who hasn’t shown up much on the LPGA Tour lately, has said she is preparing for the next stage of her life and that includes only rare appearances in competition.

Stanford University’s women finally broke the “jinx” that has been hanging over the No. 1 seeds at the NCAA Women’s golf championships.

The Cardinal won the team title on Wednesday at Greyhawk, defeating No. 2 seed Oregon, 3-2.  It’s the first time the top-seeded team has taken the title since the format went to match play in 2015.

NCAA individual champion Rose Zhang score the deciding point for her team.  Zhang won when a strange incident took place on the 17th hole.  Her opponent, Sofie Kibsgaard Nielsen accidently rang over Zhang’s ball with her push cart.  Both players hit their tee shots in the rough on that hole.  It cost Nielsen a one-shot penalty and Zhang easily won the hole to close out the match 3-and-1.