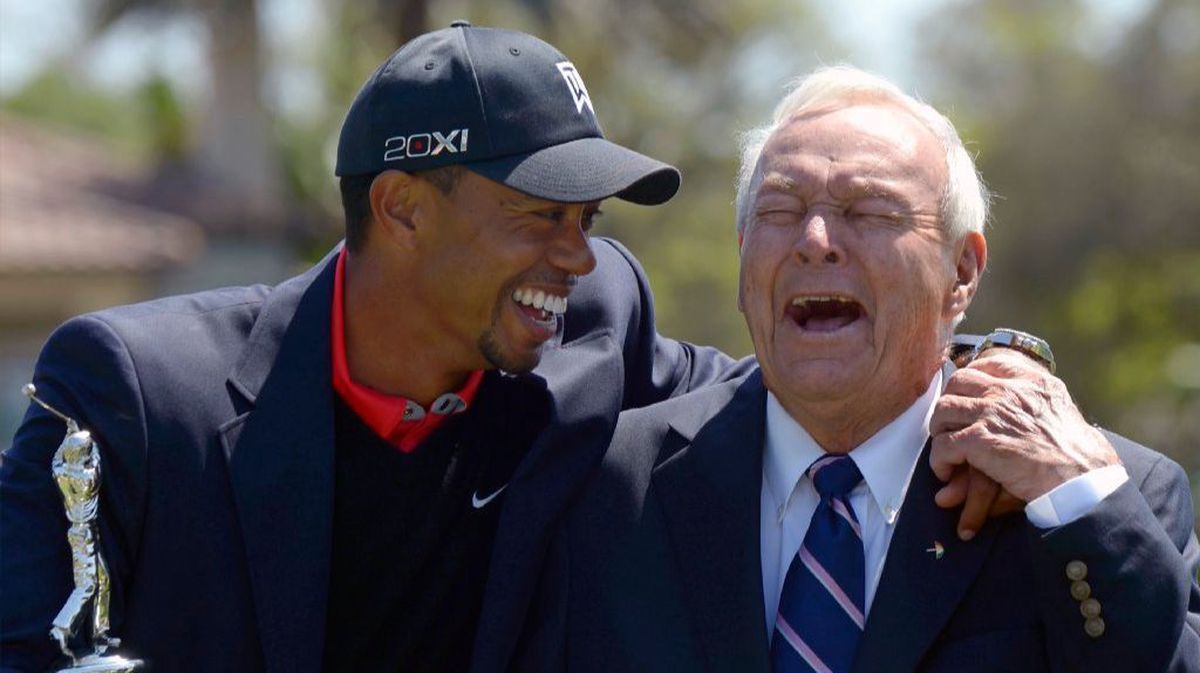 Tiger Woods is the most prolific winner of Arnold Palmer's championship.

This week’s Arnold Palmer Invitational is missing the two most important men in its history — Tiger Woods and Arnold Palmer.

Hard to believe Arnold has been gone for more than four years, leaving us in September of 2016.  Very hard to fathom that Tiger Woods is in a Los Angeles hospital, beginning his recovery from career-threatening injuries suffered a week ago.

These two icons remain today the focal point of this week’s event at Palmer’s Bay Hill Club outside Orlando.

Arnold put this event on the map when he created the tournament back in 1979.  Before then, the old Florida Citrus Open was staged over at Rio Pinar from 1966-1978.

With Arnold at the helm, overseeing basically every detail that first year, it was obvious that it would become a big-time, must-attend happening for players and spectators.

Today, we have fond memories of Arnold and lingering hopes that Tiger can fully recover from an accident that left him with injuries to his right leg and ankle that have cast a shadow over his future as an elite player.

Another sad happening is what the PGA Tour did to Arnold’s event on the 2021 schedule.  It’s sandwiched in between last week’s WGC event and next week’s Players Championship, making it an easy choice for a lot of elite players to skip Bay Hill, and they are.  No Dustin Johnson (world’s No. 1), no No. 2 Jon Rahm, no Justin Thomas, no Collin Morikawa (last week’s winner and new No. 4) and no X-Man, as in Xander Schauffele, bumped down to No. 5 by young Mr. Morikawa this week.

Arnold would have been ticked off, no doubt.  Thank-you Jay Monahan (aka The Sheriff Of Nottingham).

We’ve had to learn to live without Arnold, who back in his prime, was basically the boss of the PGA Tour.  If your hair was too long or if you were bold enough to grow facial hair, well, Arnold would pull you aside and tell you to get a shave and a haircut (Tom Watson found that out the hard way).

We may have to learn to live without Tiger, certainly for now and the near future and perhaps for good, although Woods’ pal and confidant, Notah Begay, has whispered that Tiger doesn’t want to go out this way.  For sure, no one wants Tiger to go out this way.  But the climb ahead of the 15-time major champion is long and steep and it’s imperative that everyone give him time, a lot of time.

Which brings us back to this week’s offering at Bay Hill.  Fortunately world’s No. 6 — spunky Tyrrell Hatton — is the defending champion and this guy will let you know how he’s feeling during a round of golf.  One of his best moments was last year when he hit a layup shot on a par five and simply declared:  “That was the WORST layup in the history of golf!”

Now that “The Sheriff” and his “Band Of Henchmen” (aka Jay Monahan and his yes-men) have welcomed the world of sports betting with open arms — long-driving, short-wedge-deficient, short-putt-missing Rory McIlroy is the odds-makers’ favorite.  Maybe they don’t realize that Rory hasn’t won since the WGC-HSBC event back in November of 2019.  Or maybe they’re simply figuring that Rory HAS to win sooner or later and maybe this week is the “sooner.”

Our Florida weather over in Orlando looks great for Thursday, Friday and Sunday with a great chance of rain on Saturday.

For those of us who were fortunate enough to spend time around Arnold, well, the memories are rich.

Perhaps it will be time to open a Rolling Rock and remember the time when we shared one with The King.

Little did I know it was a bucket-list moment.

So Bay Hill goes on, minus The King and minus The Crown Prince.

It’s just not the same without them.