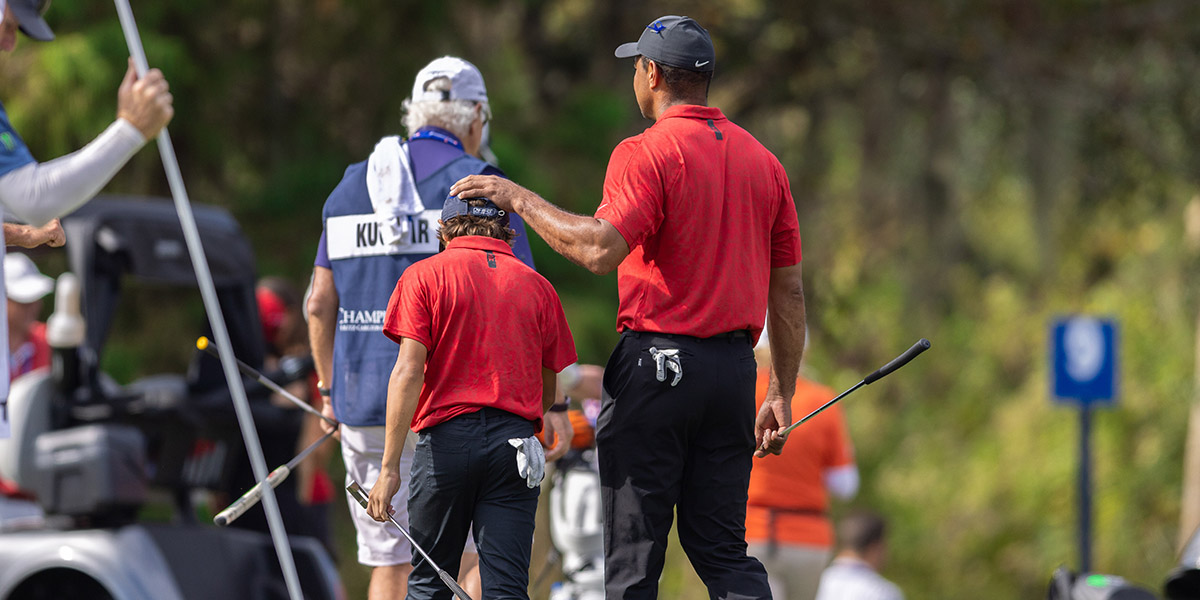 The crash and comeback of Tiger Woods was the biggest story of 2021.

The car crash that could  have killed Tiger Woods and his amazing recovery in time to play at the PNC Championship wasn’t just a golf story, it was an international story that had the world buzzing starting that fateful February morning outside Los Angeles.

The sad part of it, when you really break it down, was the fact that Tiger had to make a tedious two-day filming that was part of a big financial package, a deal with GolfDigest.com and the Discovery channel, something titled “A Round with Tiger — Celebrity Playing Lessons.”

Yes it was something ridiculous as that.

Tiger’s life-changing accident came when he was on his way to day two of a production at Rolling Hills Country Club outside L.A. with some supposed “A” listers.  Tiger would hang out, ride on the course with them and engage in some casual conversation.

There was even some PR bull-spit quotes made up, supposedly quotes from Tiger (er, Stiney):

“Shooting this series was some of the most fun I’ve ever had filming on the golf course.  Each guest brought a unique perspective on life, both professionally and personally. I’m always inspired by others who are considered the best at what they do and learning about how they made it to the top.”

Had to be written by some intern.  Pure grade A, unadulterated, unmitigated bull-spit.

But wait, there was more.

“I was pleasantly surprised by Jada and David’s golf games, and Dwyane, who just picked up the game, made a lot of progress in the time we spent together. Each episode provides something that everyone can enjoy and learn from, so I’m happy to share these lessons and conversations with the world.”

Yeah, sure, Tiger said that.  And if you believe that, we’ve got your 2022 Masters tickets waiting for you.

Then there was a gem from a guy named Chris Reynolds, the Golf Digest GM:

“It is always a privilege for our team to work with Tiger and we’re excited to have these special guests come together to create this unique series, which so perfectly blends golf and life.  And this resulted in some of the most enlightening, engaging content we’ve ever shot. We thank Tiger for allowing us to move forward in producing this series even after his accident and wish him a continued speedy recovery.”

Did that guy really have the lack of sense to say that?

Good grief.  This venture nearly cost Tiger his right leg and looking back, Woods was darn lucky to be alive.

The sad truth about all of this is when a publication like Golf Digest forks out major dollars, Tiger’s obligations extend a lot further than just the title “Playing Editor.”

Whoever came up with the idea of a 15-time major champion giving lessons to celebrity-slappers, well, they should be taken back behind the old proverbial wood shed.

Lastly, the description of the production was utterly ridiculous.

Here it is and you have to read it to believe it:

“Tiger Woods invites a group of celebrity guests for one-on-one playing lessons at Rolling Hills CC outside Los Angeles—and you, the viewer, are along for the ride.  The conversations between Tiger and his guests are funny and enlightening, heartfelt and inspiring, and cover the gamut from golf tips and life-on-Tour secrets to child rearing and favorite foods. Directed by famed Hollywood director Peter Berg (who appears frequently throughout),

This program shows a relaxed, intimate side of Tiger as he spends time with some of his favorite actors and athletes in a place they all love: the golf course.”

What it should have said:

“Tiger was basically forced to show up for two days of ridiculous nonsense to fulfill his obligations for a lucrative, big money deal.

The Great Stiney (aka Tiger Woods agent Mark Steinberg), might want to think twice before putting the next “big deal” in front of Tiger.