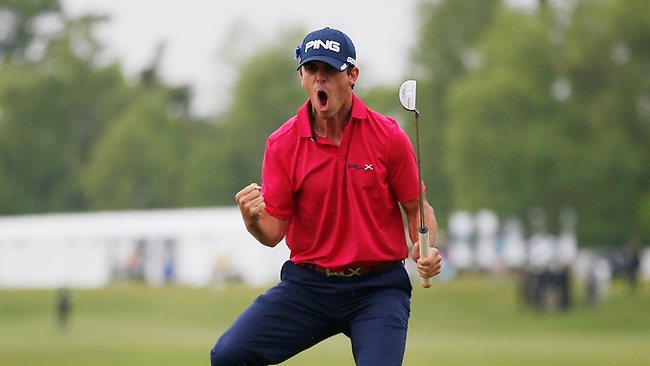 Billy Horschel won for the first time on the PGA Tour in New Orleans five years ago.

New Orleans is a place that loves its history.

And there’s a lot of it oozing out of The Big Easy.

Andrew Jackson,  aka Old Hickory made it famous during the war of 1812 when he sent the British running out of New Orleans in 1815.

Jazz was born in the Big Easy, so was Bourbon Street.

So it made perfect sense that a guy who has some serious golf history in New Orleans would emerge from the Sunday madness down there at the Zurich Classic.

Billy Horschel knew what it would take to win on Sunday.  He did exactly that five years ago and won his first-ever PGA Tour event in New Orleans.

This battle was a different sort.  Two-man teams up against it, most floundering to unlock the DaVinci Code that is alternate shot golf.

There was a lot of alternate shot misery all week at the TPC Louisiana.  While teams thrived in best-ball, alternate shot separated the contenders from the pretenders.

Evidence of that was the Chinese team of Xinjun Zhang and Zechang Dau.  They looked  like world-beaters on Thursday when they shot 60 then turned into 14-handicappers in the alternate shot on Friday and shot 80.

There were other alternate shot horror stories and one belonged to the 54-hole leaders — Kevin Kisner and Scott Brown. Kisner and Brown were 20-under through 54 and looking like they’d make up for last year’s playoff loss.  Alas, they authored a 77 over the final 18, including a 41 over the final nine and totally opened the door for a showdown between Horschel, partner Scott Piercy and the team that played with them — Jason Dufner and Pat Perez.

Horschel and Piercy had a perfect birdie-birdie start, added another at the seventh then birdied 10 and 11 to get to 22-under, the score CBS analyst Nick Faldo predicted would win.

When asked on Saturday what it would take to win on Sunday,  Horschel responded:  “A clean scorecard.”

He and Piercy scrambled their way in, putting pars on their scorecard the rest of the way.

Same for Dufner and Perez.  Their card was clean but they were a shot short when Perez stared at a 12-foot birdie putt to tie on the par three 16th.  Perez thought he hit the perfect putt.  When it missed, he flipped his putter and screamed “F–k!”  He knew what was at stake with that miss.

There were no more birdies for them.  Dufner left a 14-foot birdie to tie, short at the 18th.  “I hated leaving that short,” Dufner would recount afterward.

Throughout the afternoon, it was Horschel’s emotion and Piercy’s dead-pan that carried the winning team.

“I was zoned-out,” Piercy said afterward while Horschel was a bundle of emotion.

“His putter helped us a lot,” Piercy pointed out.  Suffice to say that Piercy made his share as well and the week helped snap him out of a very mediocre season coming into The Big Easy.

In the end, they shot 67 in alternate shot — the day’s best effort.  It beat the overnight leaders by 10 shots.

Now Horschel has some more New Orleans history on his resume.

He might want to look into buying some property down there.