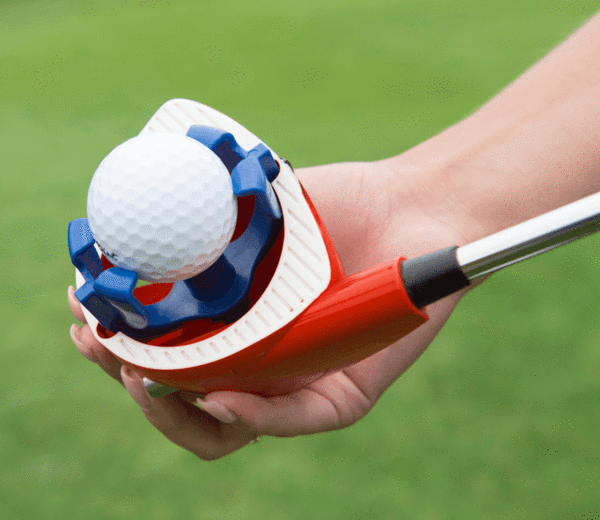 The Swing Coach is a load-and-launch club that teaches proper release.

Swing Coach: Something New For A Better Release

Ever try the old-school “throw the club” drill?

It was simple enough but not as easily executed as it sounds.  Grip a club then try and throw it down range on your target line.

Pure entertainment to watch beginners try it.  Clubs fly everywhere, left, right and sometimes they end up behind the unsuspecting beginner.

Proper release of the club can be a tough puzzle.  And the old “club-throw” drill isn’t very practical at a crowded range.

This new training aid has some proprietary design work, it almost looks like a toy.  But it is not.

It was invented by a golf aficionado named Bill Parks but there was only one problem — it didn’t function properly.

Parks recruited Reinmuth to help refine the device and The Swing Coach was born after months of research, trial, error and several redesigns.

“In the end we have something that helps the golfer teach themselves,” Reinmuth explained.

Good news is that The Swing Coach can be used in an open field, no practice range type of expanse necessary.  You load a golf ball in the face then swing.  Idea is to start slow, in the 25 mile-per-hour range, pitch speed.  The Swing Coach comes with two orange balls, smaller than a regulation ball.  They make it easier to work with the club at first.

The instructions with the club are detailed, there’s a cradle with a removable grommet behind the cradle.  Remove the grommet and the golfer can swing at higher speeds.

“I’ve never been a gadget guy,” Reinmuth explained.  “I’ve never endorsed anything just to endorse.”  But he found this club had a set purpose.  “I use this with my students and it helps them get a proper feel for the release and golf is very much a game of feel.”

We took The Swing Coach for a testing session at a local range and it performed as advertised.  It takes some time to understand, but it was very effective and after a half-hour working  with it, we were able to get some balls airborne and down the proper line.  Initial efforts found the ground quickly, to the right of our swing path.  Reinmuth pointed out that’s a natural occurrence caused by swinging too fast right out of the box.

It’s all about slower, something we can all learn from.

You can learn more about The Swing Coach at the club’s website:

This one’s worth the time and consideration.