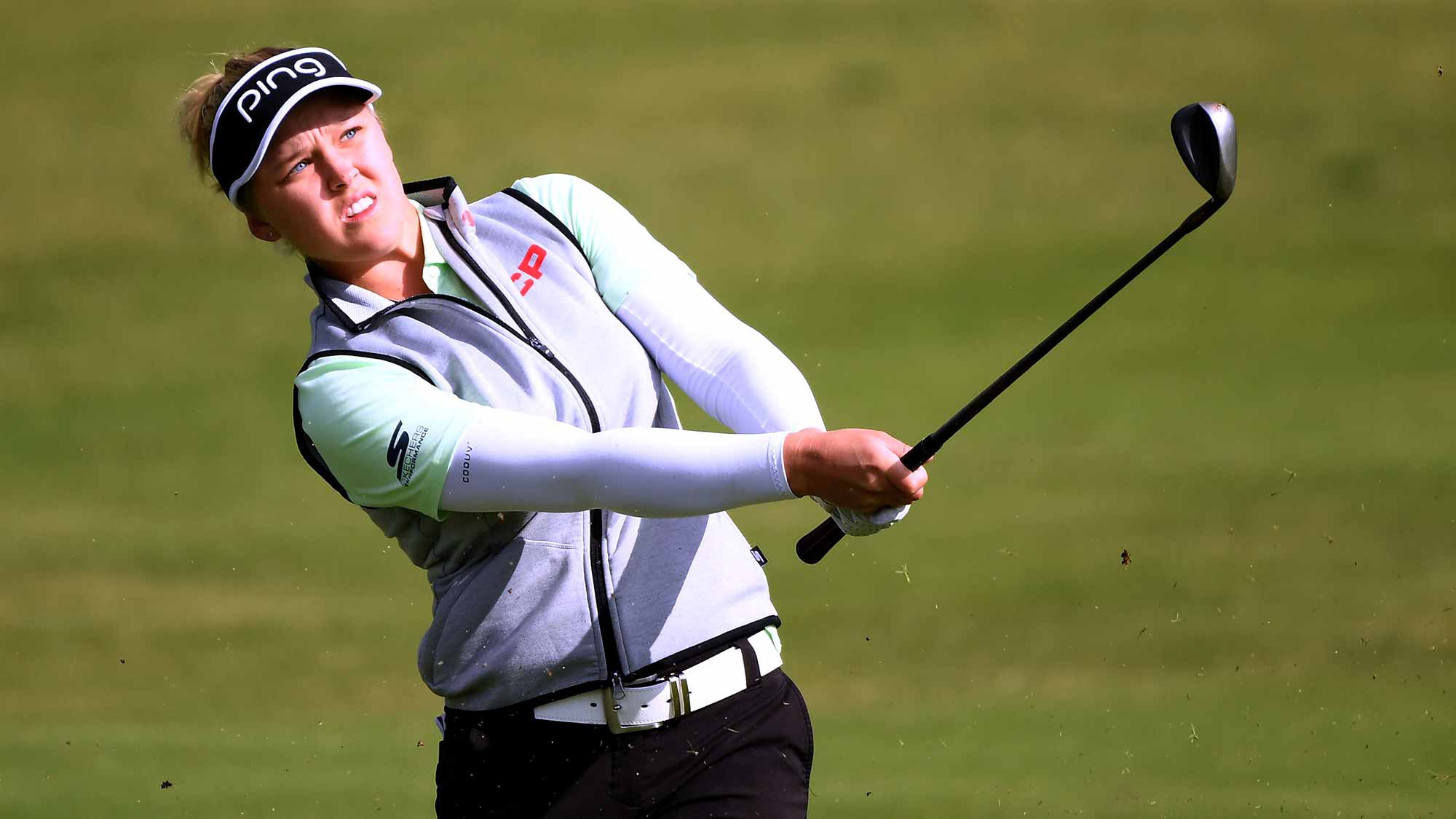 Brooke Henderson wrote the perfect final day script at the L.A. Open and charged home with a 67 that gave her a one-shot victory over Jessica Korda.

Henderson started the final 18 holes on Saturday at historic Wilshire Country Club four shots behind Korda, the overnight leader and three back of world’s No. 1 Jin Young Ko.  The Sweetheart of Canadian golf had her work cut out for her with Korda holding the 54-hole lead at a scorching 16-under par and Ko just a shot back.

Two front-nine bogeys by Korda and a lackluster day from Ko opened the door for Henderson, who made her big move Saturday at the 11th and 12th holes.  After making the turn in two-under par, Henderson hit her approach at the par four 11th within three feet for birdie then pulled off the huge momentum-changer when she pitched in for birdie from well off the green at the par three 12th.  That got her to 16-under par and she led Korda by two, Ko by three shots.

Korda cut it to two shots with birdie at 13 but immediately gave it back with a bogey at the 14th.  Korda seemed out-of-sorts all afternoon, as did Ko and Henderson took advantage.

There was a moment of doubt after Henderson bogeyed 17 and her lead was two.  She then watched Korda stuff her tee shot at the par three closing hole within three feet.  Brooke’s tee shot rolled off the back of the green and down a steep slope, leaving her a difficult second but she hit a perfect pitch to seal her first win since 2019 and take her LPGA Tour win total to 10, making her easily the most accomplished Canadian pro, male or female.

“I definitely am a firm believer when you’re in the winner’s circle you’re getting a lot of breaks and it’s sort of meant to be,” Henderson said afterward. “I was making a lot of birdies, and I think probably the biggest break was 12, that chip-in. You know, those breaks can be really small or they can be really big.”

Henderson talked how the pitch for birdie at 12 really got her going.  “Just tried to make solid contact and landed on my spot, and to have it go in was definitely a big bonus.  It was going pretty hard. So it was a huge momentum change and a huge point in my round today.”

As for the final pitch, she knew how good it was under the circumstances.  “Definitely very clutch,” she said. “That is not where I wanted that tee shot to be, so to be able to get up-and-down there for the win was really cool, especially just after Jessica made such a great shot and put a lot of pressure on me to make par.”

The sixth-ranked Henderson won for the first time since the Meijer LPGA Classic in June 2019.  Brooke finished at 16-under 268 to break the event record of 14 under set by Minjee Lee in 2019.

Korda birdied the last for a 72, missing a chance for her second victory of the year after leading after each of the first three rounds. She won the season-opening Diamond Resorts Tournament of Champions in January for her sixth LPGA Tour title.  “Really frustrating, really couldn’t get anything going,” Korda said. “I was hitting it really good and then just it wasn’t happening for me for some reason. Just kept getting screwed and the wind kept dropping and then coming back up — it just wasn’t happening. I don’t know.”

The LPGA Tour travels to Asia this week for the HSBC World Championship in Singapore that begins Thursday.

South Africa’s Garrick Higgo was simply too good for the rest of the field on Saturday and Sunday at the Gran Canarian Lopesan Open.  All he did was shoot 63-63 over the weekend for a winning 25-under par total at the Meloneras Golf Club.

It was frustrating for Germany’s Max Kieffer, who finished solo runner-up for the second straight week.  Kieffer lost a five-hole playoff last week to American John Catlin at the Austrian Open.

This time Kieffer once again gave it his best effort over the final 18, shooting an 8-under par 62 that left him at 23-under and two short of Higgo’s winning total.

“It’s unreal,” Higgo said after his victory.  “Jeez, I can’t put it into words, it feels amazing. It’s quite a relief finishing now.  It wasn’t over until the last hole really, I knew anything could happen, especially with the wind coming up. It was a bit stressful,” the 21-year-old added.  I am just going to keep going forward. I am playing next week, the week after and see where my game goes. It feels good, I have worked really hard with my coach and everyone back at home, so it feels amazing.”

The win moves Higgo to 65th in the world rankings, his career best.