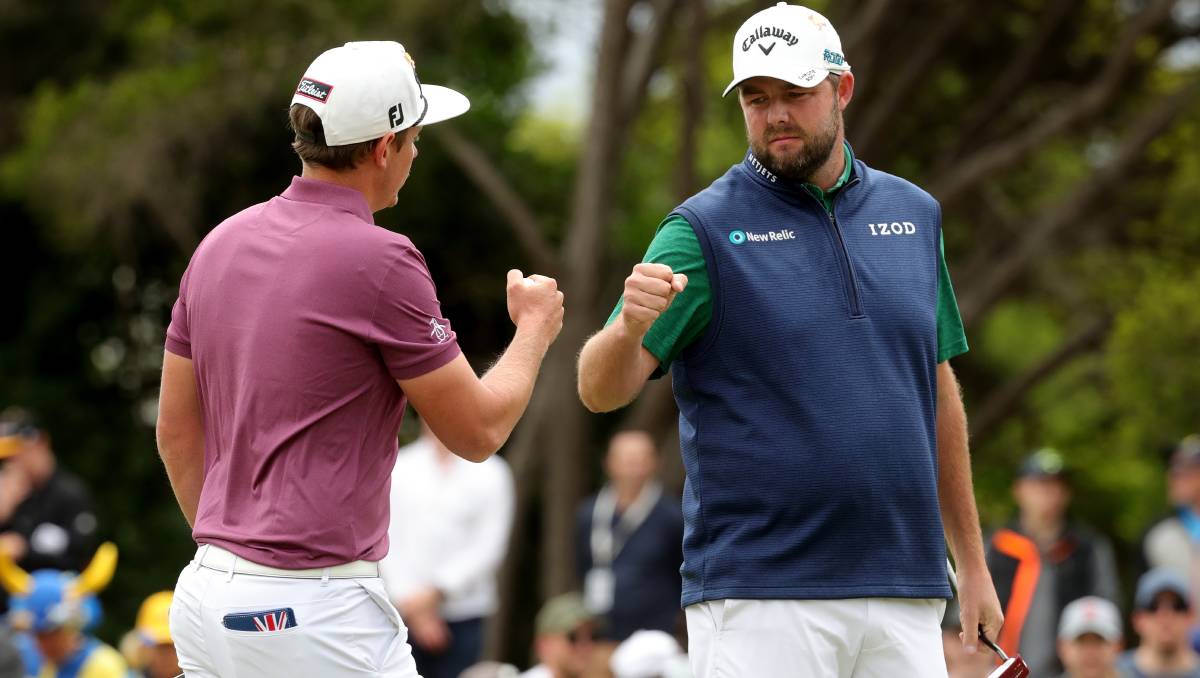 Cam Smith and Mark Leishman got an easy playoff win in New Orleans.

After a back-and-forth duel over the final six holes Sunday, the Zurich Classic came to an anti-climatic water-ball ending and the Aussie team of Cameron Smith and Marc Leishman were happy regardless.

Seventy-two holes wasn’t enough to determine a winner in the PGA Tour’s only team event and the alternate shot format at the TPC Louisiana eliminated contender after contender until two teams remained — Smith and Leishman from Australia and the South African combo of major champions Louie Oosthuizen and Charl Schwartzel.

The two teams came to the final hole locked in at 20-under par and after they both made par fives, the Aussies finished with 70, the South Africans — 71.

But the end came suddenly and was totally anti-climatic as Oosthuizen led off the first playoff hole, the 18th and promptly hit a huge block, way right and into the water.  Schwartzel was forced to re-tee and they ended up lying three while the Aussies were lying one in a bunker left of the fairway.  To make a long story short, the South Africans ended up with double-bogey and the Aussies had two putts from eight feet for victory and Smith took just one for the par and the win.

The two teams were tied at 21-under at the turn but the final nine was full of challenges.  The South African team bogeyed the 10th, Smith missed a short birdie putt from four feet but his team still had the lead by a shot.  That lead grew to two shots when the Aussies reached the par five 11th in two and two-putted for a birdie to go 22-under.

But that lead didn’t last long.  A bogey at the 13th cut their lead to one and at the 15th, Schwartzel drained a birdie putt to get to 21-under and it turned out to be a two-shot swing when Smith missed a 12-footer for par.  It stayed that way until the 16th where the afternoon’s biggest turn occurred.  Smith hit a three-wood into the water just left of the green while Oosthuizen’s drive on the 316-yard par four went long.  Schwartzel’s pitch came up well short and after two drops, Leishman was allowed to place the ball on a slight upslope.  He then hit the perfect pitch and jarred it for birdie and that would square everything at 21-under with two to play.

Both teams bogeyed the par three 17th then tied with pars at the 72nd hole, setting up the big letdown water-ball by Oosthuizen in overtime.

“We played some really solid golf,” Leishman said with the younger Smith at his side.  “The back nine was brutal but we got it done.”

The day’s low score was 67, shot by two teams.  Richy Werenski and Peter Uihlein were one of the 67 shooters and that got them to 19-under and solo third.  The other 67 came from the pre-tournament favorites — Xander Schauffele and Patrick Cantlay.  They finished at 15-under and tied for 11th.

Golf is a family tradition for Tyson Alexander.  His grandfather, Skip, won three times on the PGA Tour and was a long-time head professional in St. Petersburg.  His father Buddy, was the golf coach at the University of Florida for 27 years.

But young Tyson had been struggling lately on the Korn Ferry Tour.  He shot 84 then withdrew at the Emerald Coast Classic three weeks ago then missed the cut last week in Las Vegas.

But it all turned around for him at the Texas Rangers Golf Club as he shot a closing 64 on Sunday to win the Veritex Bank Championship outside Dallas.

Alexander put together rounds of 67-65-65 then sealed the deal with an eight-birdie performance over the final 18 holes for his first victory on the Korn Ferry Tour.

Theo Humphrey could only manage a one-under par 70 and finished at 22-under, a shot short of the winner.