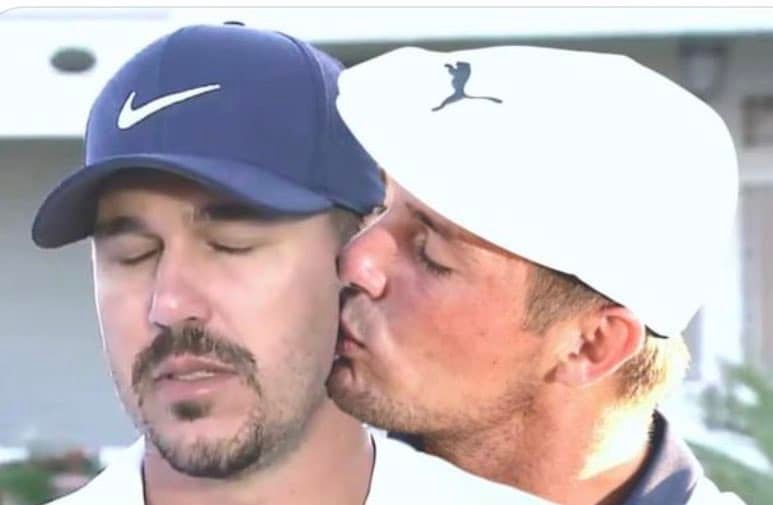 Reunited and it feels so good -- Koepka joins Bryson for LIV Series.

It didn’t take a world-class detective to know that Brooks Koepka was uncomfortable standing in front of media members last week at the 122nd U.S. Open.

He had something to hide and when you can’t tell the truth, you try and deflect, you get defensive and Koepka tried his best but deep down inside, he knew he was deceiving everyone.

That’s Brooks Koepka.  He’s surly, suspicious and withdrawn — has been since he graduated from the European Tour to the big league — the PGA Tour.

If you’re not convinced, let’s take you back to the 2020 Honda Classic that is played not far from his home.

It was Wednesday at the Honda and of course it was a natural to have Brooks meet up with what few media members were there.

And this is what he said when asked about what was then in the early stages and referred to as the “Premier League”:

Keep in mind that was two years and a number of injuries ago.  Koepka, once a fixture in the top five of the Official World Golf Rankings — has now fallen all the way down to No. 19 and now that he’s defected, that number will keep dropping.  It’s a recurring theme with players taking the fat contracts from the Saudi government — they’ve all been falling in the world rankings, no one has been moving up.

There’s a word that sums up Koepka’s full frontal deceit last week at the U.S. Open — duplicitous (thank-you Rory McIlroy, you have an excellent vocabulary).  Brooks tried to deflect the questions about his LIV interest and blamed the media for throwing what he termed a “Black Cloud” over the U.S. Open.  Truth be known Brooks, it’s something everyone had been talking about before, during and after the U.S. Open — it’s just that Brooks wasn’t man enough to stand up and tell the truth — he was the next guy going.

“I’m surprised,” said Rory McIlroy — “by the fact that he said one thing and did another.”

Over in Brooks’ neck-of-the-woods, investment banker Jimmy Dunne, the president of Seminole Golf Club, had some choice thoughts for Koepka and his Saudi-money-loving cohorts.

You may or may not recall that Dunne, at the urging of friend and business partner Chris Quackenbush, went to play in a USGA Mid-Amateur qualifier that fateful day — September 11, 2001.  Dunne never finished that round.  He found out early that a plane hijacked by Saudi terrorists had crashed into the South Tower of the World Trade Center where his firm had nearly 43,000 square feet on the 104th floor.  Sixty-six of the firm’s 83 employees were killed and in the cowardly attack, including his Quackenbush, Dunne’s childhood friend. Dunne made it his life’s work to pick up the pieces, take care of the families of those killed and resurrect the firm.

Here’s what Dunne had to say about these former Tour players heading to the LIV:

“I don’t like it when they say they’re ‘growing the game,’” Dunne said. “That’s crap. I don’t even like it when they say ‘I have to do what’s best for my family.’ I really wonder how many of those guys, the lifestyle that they were living was so horrible that their family needed them to do this. Just say, ‘I’m at a point in my career where I (want to) make five times as much money against much weaker competition and play less.’ Just tell the truth. Don’t cover it with a lot of crap.”

And that’s what Koepka fed everyone last week at the U.S. Open — a load of crap.

Yes, tobacco-chewing, Bryson DeChambeau-loving Brooks fits the LIV profile to a tee.  Not much of a personality, deceitful and unable to stand in front of a media group that knows he’s feeding them a big shovel of bull-crap.

Truth be known, Brooks was never much of a fan of regular PGA Tour events and pretty much said so at times.  He also said in a Golf Digest interview a while back that he plans to equal or pass Tiger Woods and his 15 major championships.

But now, no one has to listen to it anymore.