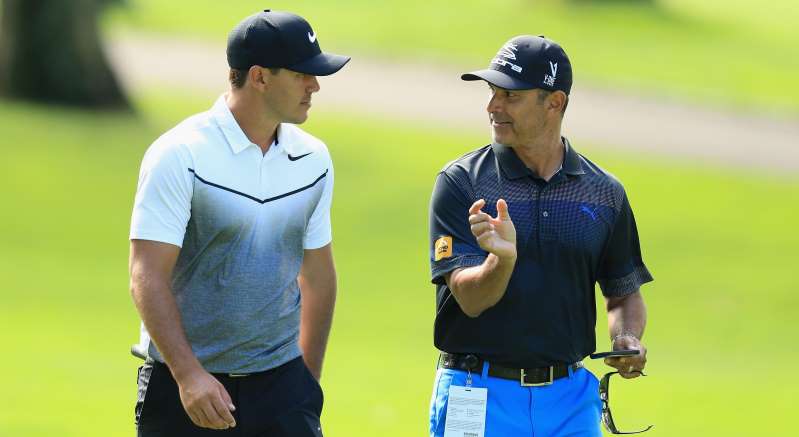 We’ve all seen the pattern for tour players, male and female — when things aren’t going so well, they’ll fire their caddie, sometimes fire their swing instructor and sometimes they’ll do both and apparently Brooks Koepka is no exception.

Koepka has worked with Claude Harmon III for most of his professional career and the results were incredible — four major championships, a stint at No. 1 in the world — but apparently that wasn’t good enough for Brooks.

The tight-lipped Koepka gave no indication and neither did Claude The Third until there was an inquiry made to CHIII following Brook’s totally lousy outing at the American Express that produced rounds of 72-71 in an event where birdies were flowing like champagne at an upscale, five-star brunch.

When asked what was up with Brooks, Claude The Third gave this quick response:

“I don’t know.  We are no longer working together.”

Claude The Third did expound a bit on the timeline of his departure from the Koepka Camp:

“Brooks let me know the Wednesday after the Masters he was going in a different direction,” CH III revealed.  In a day and age where folks get the boot via text messages. at least Koepka afforded the courtesy of a face-to-face at the Floridian Club.  Claude totally took the high road, singing praises for his former employer:

“Brooks is an unbelievable player and great champion, and extremely talented.  As devastating as it is to have it happen, I’m so grateful for what he did for me and my family. Me, Ricky Elliott (B.K.’s faithful caddie), Marc Wahl (B.K.’s physical therapist), the whole crew, it was like we were a band of brothers. That’s hard to not be a part of. He has to do what’s best for his career, and I know he’ll be fine.”

Obviously Harmon’s the class act side of this split.

As for Brooksie, his explanation was short and sweet:

“I love Claude, we had a great run and he’s still family to me, but unfortunately we’re not working together anymore.”

All Harmon did was get Koepka to the top of the heap in a beyond-competitive game.  Koepka’s been trending down and he’s not alone — Rickie Fowler, Rory McIlroy, Jordan Spieth, among others have been heading down faster than a lousy stock.

At the American Express, Koepka looked a bit thicker around his waistline and his game, well, the numbers speak for themselves.  The hidden factor here is the real state of that bum knee of his — only Koepka knows for sure and you wonder if he’s really telling the truth about what’s going on there.

When it comes to the Harmon family, they are Instruction Royalty in the golf world.  We all know about Butch, who’s semi-retired and basically picks and chooses who he works with these days.  Claude The Third works with Dustin Johnson and all he did was dominate last year and won The Masters easily.  CHIII also works with Si Woo Kim and we saw him take care of business and return to the winner’s circle last week at the American Express.

So yes, this is a head scratcher but in a way it isn’t.  Koepka has taken the path too many take when things get a little testy.

Brooks is in the field for this week’s biggie — The Farmers — on a real manly track — Torrey Pines.

Maybe he can manage to make the cut.

In the meantime, we’ll leave you with this tidbit from the now-dismissed Claude The Third:

“When we first met, I asked him (Koepka) what his goals were. He said he wanted to be No.1 in the world, win multiple majors and play for the U.S.A in Ryder Cup and Presidents Cup teams. I’m proud I was part of the team that helped him achieve those goals.”

Apparently the sum of the work, in the end, wasn’t good enough for Brooks.