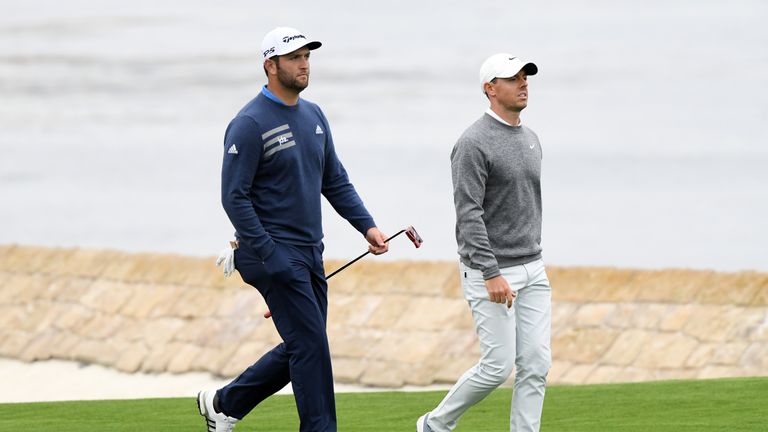 Jon Rahm and Rory McIlroy are the two lead dogs at The Farmers.

Torrey Pines is a big-boy, major-championship-quality golf course and some big names are gathered there this week for this 2021 edition of The Farmers — Jon Rahm and Rory McIlroy are your headliners.

Rahm and McIlroy will be two key members of this year’s European Ryder Cup team and both have some question marks surrounding them this week out there in sunny San Diego.

Rahm bailed on the American Express last week, revealing that he perhaps got over-ambitious in the gym and “tweaked” something.  He took the week off more as a precaution, per the man from Spain.

McIlroy made his 2021 start last week in Abu Dhabi, where he’s done everything but win and apparently there’s some sort of Abu Dhabi curse on Rory as he looked pretty hapless over the final 14 holes on Sunday.  He was the 54-hole leader but was boat-run by Tyrrell Hatton in their head-to-head, mano-a-mano meeting over the final 18 holes.  Hatton’s on the rise, climbing to No. 5 in the world rankings while Rory’s falling, dropping to seventh this week.

If you had to pick between the two this week, well, Rahm might be your guy.

But there are plenty of name stars showing up this week — Xander Schauffele, Patrick Reed and defending champion Marc Leishman.  Phil Mickelson will show up in his former home town but Lefty may be a man in transition.  Before he easily missed the cut last week, he said he’s going to evaluate the real state of his game which was secret code for saying he may play in more Champions Tour events where he can clobber the Foot-Joys off most of those over-50 guys.

The Tour’s Best Supporting Actor — Tony Finau — got in the hunt once again last week, had a nice chance to win his first meaningful event (sorry about thatPuerto Rico Open).  But once again Tony was unable to muster his best stuff when he needed it — a very familiar pattern with a guy whose talent level is off the charts.

If you had to pick a pre-tournament favorite, you’d take a serious look at Patrick Cantlay.  Cantlay put on a weekend show at the American Express.  He made 20 birdies out of 36 holes.  After a sleepy start that saw him post 69-71, Cantlay lit it up with a Saturday 65 and a Sunday 61 with 11 birdies.  Obviously he’s clicking coming into this week.

Expectations are high for Schauffele as he’s overdue for a trip to the winner’s circle.

Two bigtime slumpers are playing this week — Jordan Spieth and Farmers brand ambassador Rickie Fowler.  Everyone knows about the Spieth slump and Rickie’s fallen into the same pattern.  The main place we see Rickie on television these days is in those Farmers ads.

This was supposed to be the week that Tiger Woods made his first appearance of 2021 but once again, golf’s greatest active star is on the mend from a fifth back surgery.

This venue never disappoints and this week should be no exception.

The winner on Sunday?

If we had to pick, well, how about Patrick Cantlay?