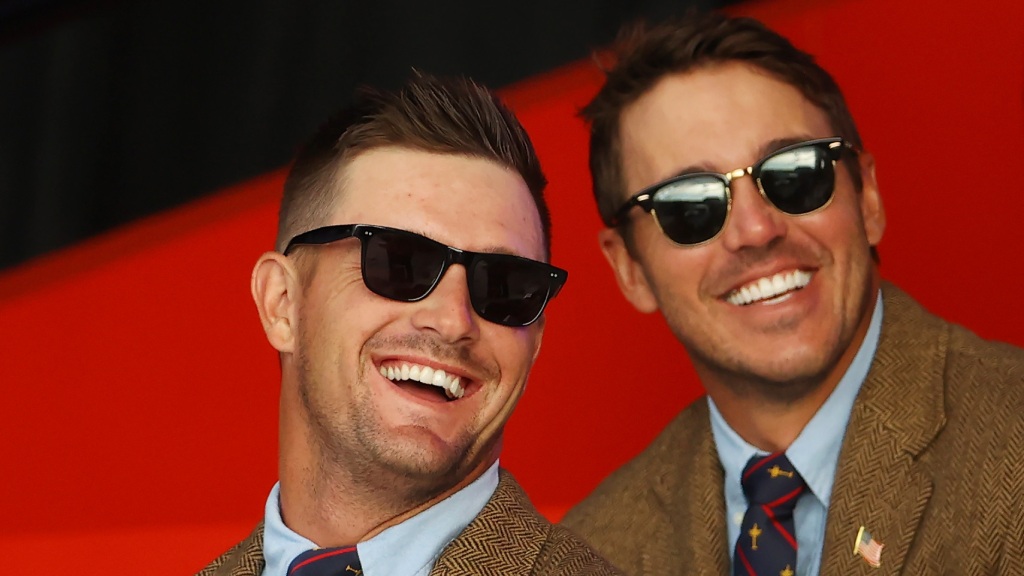 Brooks and Bryson have buried the hatchet, will they have to dig it up again?

What started out as Tiger vs. Phil in Vegas back in 2018 (The Match) hasn’t really grown much — one was enough but now there’s the 2021 version of “The Match” and this “Match V” brings us a couple of guys who have been through the love/hate process and last time we checked, they were sharing a hug at the insistence of their Ryder Cup teammates after last month’s thrashing of the Europeans at Whistling Straits.

Yes, it’s coming to you in November, the day after Thanksgiving (Nov. 26), the way the first Tiger-Phil match came.  Aside from the facts that Brooks and Bryson have basically kissed and made up, there isn’t much to see here.  Maybe the folks at Turner Sports know something the rest of us don’t know because this “Match V” will only be a 12-hole deal at the Wynn Golf Club located a Bryson wdge shot from the Vegas Strip behind the Wynn Hotel.

It’s a charity match and there will be more details coming as to which charitable causes will benefit from these guys matching shots for a few hours.

Of course the mic will be on both and maybe if Koepka hits one of his drives into a difficult lie and asks for relief and doesn’t get it — perhaps he’ll drop a live F-Bomb on live television.

The only thing that makes this intriguing is that Charles Barkley will be part of the broadcast crew and Chuck harkens back to the old days of Howard Cosell, whose catch-line was:  “I tell it like it is…”  In addition to Chuck, Mickelson will be part of the on-air crew (wonder who Phil’s betting on?).

You might recall in the first Tiger Woods/Peyton Manning vs. Phil Mickelson/Tom Brady match at The Medalist, it was Chuck who declared on air:  “This is some really crappy golf.”

And early in the match, it certainly was.

So yes, ladies and gents, there is finally going to be a Bryson-Brooks showdown.  Hopefully there will be spectators and hopefully the PGA Tour won’t ban the cry “Brooksie” when DeChambeau is heading down the fairway.

But going back to the Ryder Cup, where captain Stricker made sure both buried the hatchet — well, there really isn’t much to see here — is there?

Isn’t It Time For Scottie Scheffler To Win?  How About This Week At Shriners Children’s Hospital In Vegas?

It’s not like there was an all-star field last week at the Sanderson Farms Championship — it’s what you get this time of year but Sam Burns used his experience from the Valspar victory to get his second Tour win in Jackson.

Which brings us to this week’s Shriners Children’s Open at TPC Summerlin.  First thing you notice is that they shortened the name — used to be Shriners Hospitals For Children Classic or something to that effect.  It didn’t exactly roll off your tongue and the length made it a nightmare for headline writers.

Thus the new Shriners Children’s Open.  Unlike last week there are some bigger names teeing it up.  You’ve got Brooks Koepka, Scottie Scheffler and Harris English from the victorious U.S. Ryder Cup team.  Rickie Fowler will start his 21-22 season.  Patrick Reed’s in the field as is Hideki Matsuyama and Will Zalatoris.  Unfornately for Kevin Na, he’s sitting this one out with a rib injury.  With Louie Oosthuizen and you have 11 of the world’s top 25 in town for this one.

Bryson DeChambeau won’t play either this week or next week at the CJ Cup as the Tour is in Vegas for two straight weeks.

But a lot of eyes will be on Scheffler this week.  Tour observers keep saying it’s not a matter of it but when for Scheffler and judging by the dusting he gave the world’s No. 1 (Jon Rahm) at the Ryder Cup, maybe this should be the week.