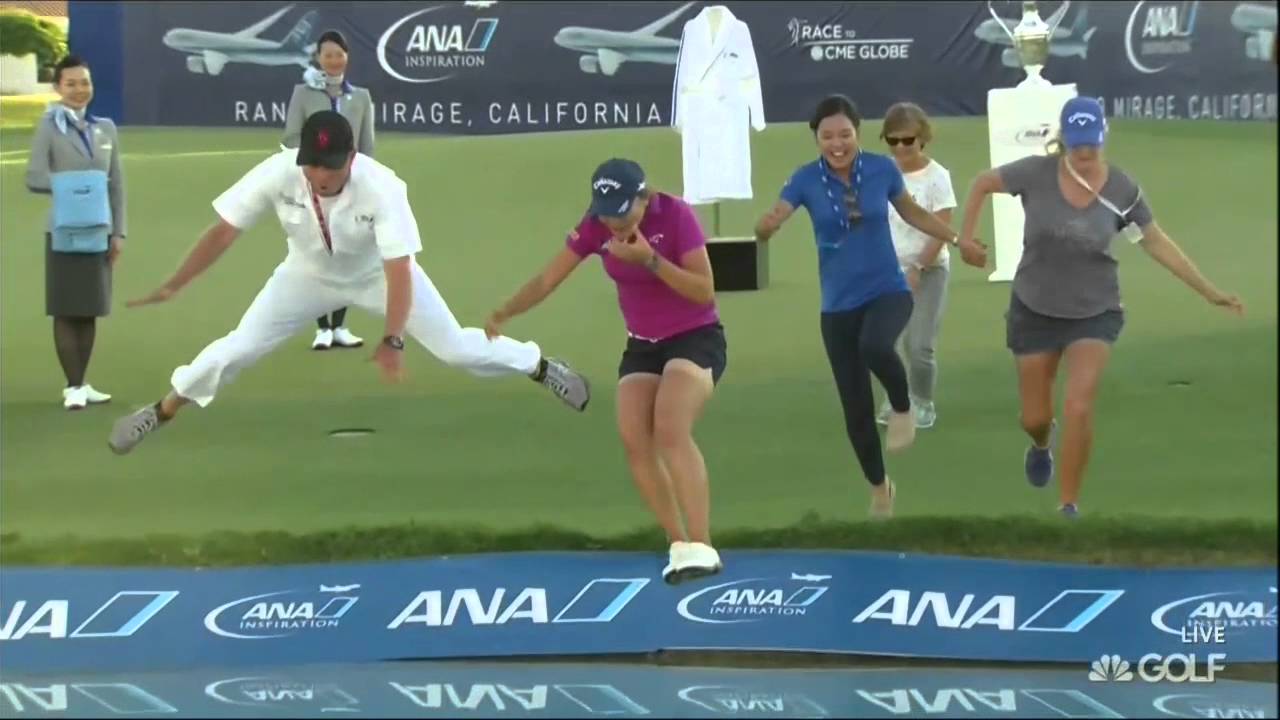 The victory jump into Poppie's Pond will come to and end in 2022.

LPGA Tour: End Of The Line For ANA, Mission Hills and Poppy’s Pond

So long Dinah Shore — it was nice to know you.

Same for you — ANA Airlines — thanks for all those sponsor dollars.

As for you Mission Hills — your days as host of the LPGA Tour’s first major of the season are coming to an end with the 2022 event. Sorry about that.  If they can throw Dinah Shore under the bus, what chance did you have?

And Poppy’s Pond — the aquatic destination that every LPGA Tour member dreamed of — who knew jumping in a pond would become an iconic tradition?

Thanks LPGA Tour commish Mollie Marcoux Samaan (yeah, it’s trendy to have two last names), the strong fan base out at Mission Hills won’t mind this latest “pie in the face” gesture.

There’s going to be a new location, a new venue and a new date for this LPGA major championship.  Perhaps the writing was on the wall.

The ANA had always enjoyed inviting the best young amateurs to the season’s first major but when Augusta National Golf Club created it’s own little amateur competition the same week as the ANA, well, the amateurs totally preferred to play where only the nation’s elite gather from time-to-time as their schedules permit.

So what drove all these changes?  One simple word — money.  Money can do a lot of things and evidently ending a tradition that started back in 1972 is one of them.

Chevron will become the rich Dutch Uncle for this championship and that means you’re probably looking at Houston as the host city.  There’s a rumor that Chevron is headquartered there.

Keep in mind that Chevron is your basic monster oil company and the current political powers in this country are doing their utmost to get rid of oil and gas and those nasty, gas-driven, oil-lubricated automobiles.  The end is coming, Chevron, better make your plans.  At some point in time, you’ll know how Mission Hills feels today.

Keep in mind that Chevron will jack the purse up from it’s current $3.1 million to $5 million and make it the richest event in the history of women’s golf — a great reason to throw Mission Hills, Dinah and the rest under the proverbial gas and oil-driven bus.

“We do not make the move lightly,” Ms. Marcoux Samaan offered.  “Since David Foster and Dinah Shore created this competition in 1972, it has held a special place in the hearts of our players and fans around the world.  No matter where it is held, Dinah and her influence, along with the history built at Mission Hills, will be an integral part of the Chevron Championship. We thank ANA and Mission Hills for their tremendous support and look forward to celebrating the many years of tradition as we continue to add to its footprint in the history of women’s sports.”

Thanks Commissioner Marcoux Samaan.  I’m sure the folks out there will appreciate that.