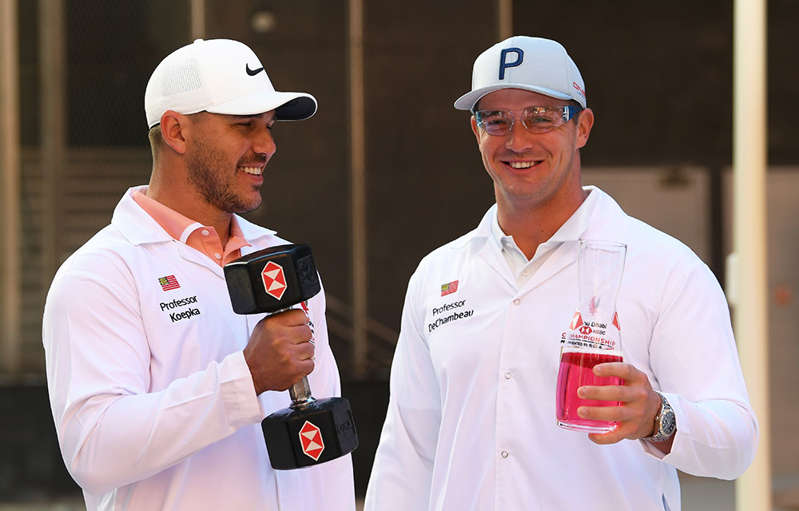 With so many eyes from outside the golf world, along with everyone on the inside talking about the Brooks Koepka-Bryson DeChambeau pseudo-feud, we’re keeping the day-by-day scorecard to see who tops who this week.

This one goes to Bryson.  He’s the easy winner.  He was amiable and engaging during his presser, answered a lot of questions and was friendly with the press.

Koepka, on the other hand, gave short, quick answers in his usual, boring monotone.  Brooks always gives the impression he doesn’t want to be there and the press picked up on that.  Koepka’s press conference didn’t last more than five minutes.

Speaking of interviews, after Brooks’ first round, during his interview with Golf Channel, Bryson playfully jumped in the air from a distance and managed to “photo bomb” the session.

Brooks looked totally comfortable out there, zoned in.  He hit only two bad shots all day and it was a pretty stress-free 69 — could have been a lot better.

Bryson, on the other hand, is going with his game plan from Winged Foot.  He’s going to blast his driver as far as he can and take it from there.  He started on the first tee, birdied the second hole to get under par but then took back-to-back bogeys.  Another bogey at the seventh then a birdie at eight left him one-over at the turn.

By day’s end, Bryson had to birdie the 18th simple to shoot 73 which left him in a tie for 61st.  Bryson had problems with accuracy off the tee and control of his irons.  Didn’t seem like anything went his way.

Fortunately both managed to get their rounds in and didn’t have to go back at oh-dark-thirty to finish the first round.

But in this duel:  First Round Belongs To Brooks

Day two was no contest.  Bryson rallied and shot a two-under par 69 to get back to even par.  What’s crazy is that Bryson says he found his form in a Thursday night dream:

“It’s one of those things I was sleeping and it came to me in the middle of the night, woke up and I was like, hmm, I’m going to try this,”  Bryson said.  “I went out, and my intuition is pretty good, so I went out and tried it and it worked.”

Brooks struggled after a good start.  He made two early birdies, got to four-under for the tournament but struggled over the final 12 holes.  He missed a five-footer for birdie at the 18th and had to settle for a two-over par 73.  Too many drives in the rough and he hit only seven greens on day two.

After 36:  Second Round To Bryson

No contest here.  Bryson worked his way around Torrey Pines and his three-under par 68 put him in position to make it two-straight U.S. Open titles.  He’s at three-under par just two off the lead.

As for Brooks, two bogeys coming home on the final nine hurt his chances and dropped him from red numbers back to even par, meaning he’ll have to shoot something Johnny Miller-like if he expects to win on Sunday.  He signed for an even par 71.

After 54:  Third Round To Bryson

Nelly Korda shot a career round Saturday at the Meijer Classic — a blistering 10-under par 62 that moved her into the 54-hole lead.

Korda’s 10-under round also set the tournament course record at Blythefield Country Club.

Rookie Leona Maguire held the 36-hole lead but her 70 allowed Korda to blow past her and take a three-shot lead into the final round.

Madeline Sagstrom will start the final round four back of Korda after she posted a 65 that got her to 16-under par.