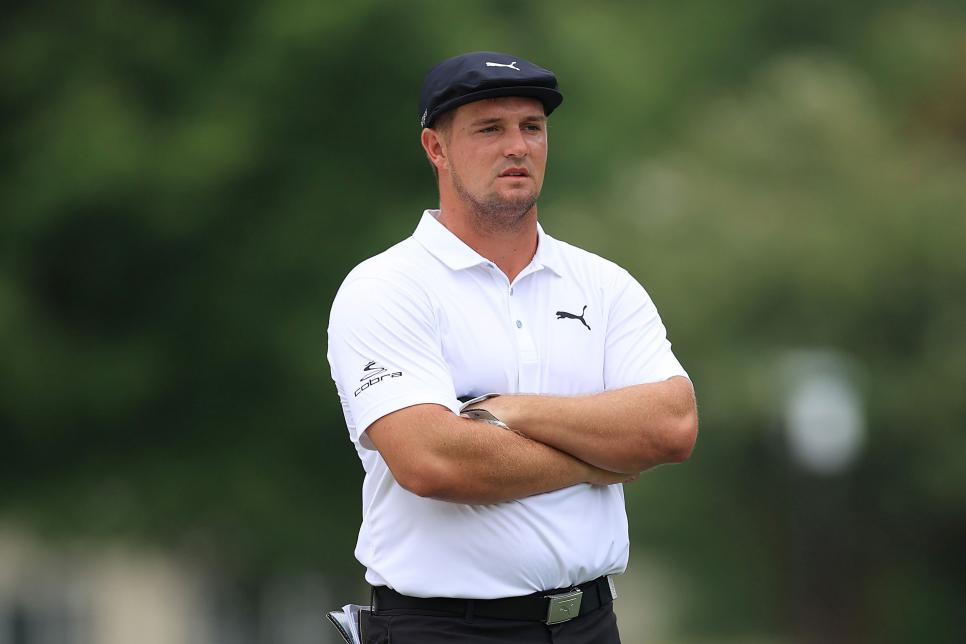 Bryson DeChambeau tried to bend the rules in his favor at The Memorial.

That didn’t work out at all.  Out-of-bounds is out-of-bounds, although DeChambeau was obviously confused as to what constitutes a ball out-of-bounds.

He tried again on Thursday at the WGC-St. Jude but this one was more wild and wacky than his out-of-bounds escapades at The Memorial.

DeChambeau hit a wayward drive left of the seventh fairway, his 16th hole of the day at TPC Southwind and it settled into a bad spot, surrounded by dead twigs.

Then came the imaginary fire ants.

“So, there was discolored dirt and I saw a couple red ants there and I was thinking, hmm, anthill, may get something or what-not,” said DeChambeau, who was four-under4 under for the day at the time.

PGA Tour rules official Ken Tackett showed up.  Tackett was the second official on site at The Memorial to give DeChambeau his requested “second-opinion” in the out-of-bounds caper.

“I asked and he was like, well, it’s got to be, you know, kind of endangering you. And I was, just an anthill.”

There was no anthill to be seen as Tackett set his walkie-talkie on the ground, demonstrating that the dirt was flat and clear of any ants.

A lengthy conversation followed and Tackett eventually denied DeChambeau relief from what DeChambeau claimed was anthill. After punching just short of the green, DeChambeau failed to reach the putting surface with his next shot on his way to a double-bogey six.

“I’m always going to respect the officials and go, OK, no issue, that’s fine,” he said. “It didn’t help that I had a really, really bad lie, too, I had two twigs lodged in between my ball. It is what it is.”

Justin Thomas was without regular caddie Jimmy Johnson last week when heat got the best of Johnson at The Memorial.  Thomas’ dad, Mike, filled in.

This week, J.T. has a familiar face on the bag — Jim “Bones” Mackay.  Mackay caddied for Matt Fitzpatrick at The Workday and The Memorial and was summoned to further duty by Thomas.

Bones is with J.T. this week and for next week’s PGA Championship.

Johnson is back home getting medical tests to determine the source of the dizziness that knocked him out of action at The Memorial.

Colin Swafford discovered Jason Day when Day was a 12-year-old, alcohol-abusing 12-year-old with a grim future.

Swafford took Day under his wing and made him into one of the world’s elite players.

Swafford coached Day and eventually caddied for him.  Day ended the caddie chores for Swatton in 2017 and Swatton focused on being Day’s swing coach.

Now Day has walked away from that relationship.

“It’s been a long and successful road working with Col. I have just decided I want to make a change and work on my own as it pertains to my golf swing,” Day said.

“I was kind of surprised but at the same time not surprised,” Swatton said  this week.  “When you do what I do for a living you know that day is going to come. You know they are going to take ownership and it’s more of a compliment than it is a shock.”

Jon Rahm was all over the lot Thursday at TPC Southwind.

He had trouble controlling his driver and it was difficult to score from the lush rough at the WGC-St. Jude.  But by the end of the day, he was able to work his way back and shot an even-par 70.

“I certainly didn’t play like world No. 1 today so hopefully I can live up to it the next few rounds,” Rahm said.  “I’m sure if there were fans out here it would be a different feel to it, but not right now. No, it feels like any other day. It was so difficult out there that I had no time to be thinking of that.”

The Barracuda Championship is the only PGA Tour event where you want a “plus” in front of your score.

They’re on the Modified Stableford scoring system at the Tahoe Mountain Club in Truckee, Ca.  Ryan Moore and Adam Schenk shot eight-under par 64s which put them atop the scoreboard with plus-14 points after day one of this opposite-field event.

Seamus Power, Pat Rodgers and Will Gordon were tied behind them at plus-11 points.