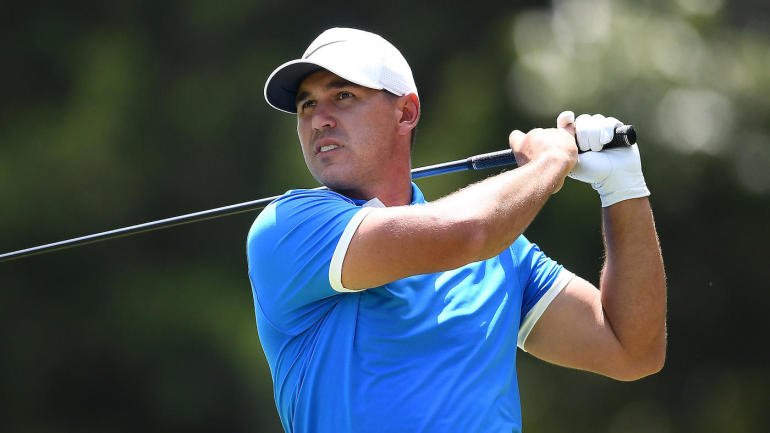 Brooks Koepka found the pieces of his missing game with nine birdies.

Welcome back, Mr. Koepka, it’s been a while.

It’s been a while since we’ve seen you put nine birdies on the scorecard in a single round — three years to be exact, back at the 2017 BMW.

Brooks Koepka’s confidence oozed all over the TPC Southwind on Thursday during the first round of the WGC-St. Jude.  He didn’t waste any time letting everyone know that he may be out of his funk.  Four straight birdies to start your round will do that.

The defending champion reminded everyone that he can work his way around this course.  There was plenty of wind late Thursday but that didn’t bother him a lick.  By days end, those nine birdies and a single bogey added up to 62, tying his career best.

Koepka didn’t act the least bit surprised.  He sounded confident earlier this week and there was good reason.

“We worked hard over the weekend.  On Monday I worked with Claude (Harmon III) for eight hours.  It felt back to normal.  I feel very much in control.  We found some things, dropped my left foot back a little and everything seemed to click,” Koepka said after signing his extraordinary card.

“I felt like I was back to normal on Tuesday and Wednesday so it’s nice to have a good result.”

Some questioned the state of his confidence.  He was quick with an answer to that yesterday:  “I’m defending aren’t I?”

Yes, he is defending and that old Koepka confidence never left.

“The confidence has always been there,” he said, without cracking a smile.

There are still 54 holes to play but the biggest thing about day one was the putter.  It finally showed up.  He used just 19 putts through his first 14 holes.  His short game was back in major form.  Ditto for the flat-stick.

Two back of him was Rickie Fowler.  Another big name in need of some good mojo and Rickie found it.  Like Brooks, Rickie’s old reliable, the putter, was working again.

It was a day made for scoring.  Overnight rain softened the course and the greens, they played lift-clean-place which helped 35 of the 78 players shoot under par.  Another 10 were at even par 70.

It wasn’t all ice cream and cake for everyone.  Some big names struggled.

World No. 1 Jon Rahm had some control problems with his tee shots, he spent most of his round over par but by day’s end got it back to even (70).

World No. 2 Rory McIlroy wasn’t as fortunate.  Rory put five bogeys on his card and finished with 73 that left him tied for 67th.

There’s a lot of attention being paid to this elite field — next week if the first major of the  year, the PGA.

And guess who is the defending champion when play begins at Harding Park?

Yes, that would be Mr. Koepka.

There wasn’t a trace of a knee problem on Thursday.  He looked effortless when he transferred that weight and posted on his left leg.

So yes, Brooks was a bit prophetic when he arrived.

He said he was close.

It was better than close on Thursday.

For 18 holes, the old Brooks mojo was back.

Editor’s Note:  The biggest challenge the next three days will be the Memphis weather.  Thunderstorms are in the daily forecast through Sunday and they’ve moved the Friday tee times up to try and beat the rain.