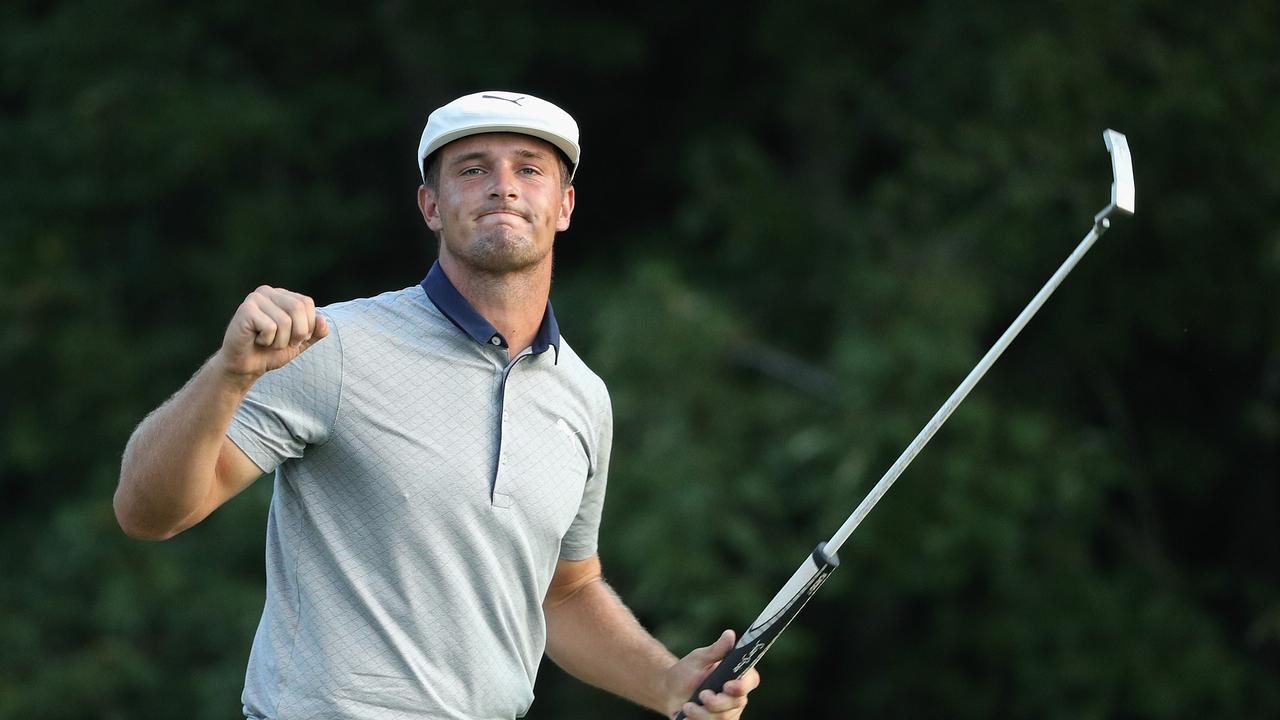 When you look at the star-studded field for this week’s offering at the C.J. Cup at Shadow Creek in Vegas you’ll see the names of Jon Rahm, defending champion Justin Thomas, new daddy Rory McIlroy and PGA champion Collin Morikawa.

On Tuesday, in stunning news from Vegas, Dustin Johnson and the Tour announced that D.J. has tested positive for COVID-19 and he’s out of the tournament.

In a statement released by the Tour on Tuesday, Johnson told tournament officials that he was experiencing COVID-19 symptoms. He was administered a test, which came back positive.

Johnson then withdrew from the field.

“Obviously, I am very disappointed,” the world’s No. 1 said in a prepared statement. “I was really looking forward to competing this week, but will do everything I can to return as quickly as possible. I have already had a few calls with the tour’s medical team and appreciate all the support and guidance they have given me.”

So now the field of 78 is down to 77. But it’s still pretty elite compared to what we’ve seen the past two weeks.  This field is so elite that Tommy Fleetwood, Rickie Fowler, Sergio Garcia, Jordan Spieth, Justin Rose, Ian Poulter and Open champion Shane Lowry all need sponsor’s exemptions to get in the door.

Tony Finau, aka “Defendant” withdrew from the field on Tuesday.  There was no reason given although it is most likely that Finau is still in recovery mode after testing positive for COVID-19.

You’ll also see the moniker of Brooks Koepka, the star who has been MIA for a couple of months now, coming back after a two-month stint on “Injured Reserve.”

So who are we missing besides D.J.?

Well, for one — Eldrick T. Woods, aka Tiger.  Could be that Tiger had PTSD from Shadow Creek after getting beat out of $9 million by Phil Mickelson?  But really, Tiger’s not here because he’ll show up next week at the Zozo Championship, the event moved from Japan to Tiger’s old stomping grounds at Sherwood, north of L.A.  Asking Tiger to play back-to-back weeks is simply too much.  Reps be damned, can’t put more mileage on the old body.

But there is another pretty big name on the absentee list — world No. 5 Bryson DeChambeau — as in Bryson The Disruptor, Bryson the U.S. Open champion.  World number two through four are in but number five is out.  Number one was supposed to be in, but he’s out with the virus.

Seems the tour’s Mad Scientist will sequester himself away to his version of Superman’s Fortress Of Solitude or Batman’s Bat Cave — the place where Batman invented all those crime-fighting gadgets of his.  Bryson has something going — he’s going to prepare for a full-on, hit-the-crap-out-of-it assault on the hallowed grounds of Augusta National Golf Club.

First thing on his list is a 48-inch driver shaft.  Kinda like Dirty Harry telling us the old .44 Magnum didn’t have enough stopping power.

Yes, it’s about equipment designed to take down “The National.”

“I’ve still got some equipment stuff coming in the next two months, that’s mainly why I’m taking off,” DeChambeau said. “I feel like the advantages that I usually have could be much improved upon with the equipment. We don’t have it yet, but we’re diligently working on it behind the scenes.”

Now to get used to that 48-inch shaft, the maximum allowed by USGA law, Bryson expects to hit “around 2,000” drives over the next month or so to try and add even more swing speed.

Now that may sound like a lot but our simple math shows it’s only about 66 swings with the driver per day.

Clearly things worked out for him at Winged Foot without the 48-inch howitzer.

Byrson’s mantra is still the same:  “I do want to try and find distinct advantages that allow me to be better and better each and every time I play,” DeChambeau said. “Clearly, it’s helped. I think there’s been a big change this year, and I’m not going to stop.”

Now if you happened to pay some attention to last week’s Shriners event at TPC Summerlin, you’d notice that Bryson shot 59 in the Pro-Am then 62 on day one.  Day two wasn’t as good — 67 — which was a high score on that lot.  Saturday was the eye-catcher.  Bryson was all over the place, hitting those huge drives of his into places where armadillos would have trouble maneuvering.  He made doubles and bogeys and had to struggle on the final nine just to shoot even par.  So yes, Superman is vulnerable to off days.  And if you start hitting it crooked at Augusta, you can find some places that make it tough to score.

So while the distance debate rages on and guys like skinny Matt Fitzpatrick complain about bulked-up Bryson ruining the game, all we can do is wait with anticipation to see what sort of alchemy Mr. DeChambeau will work on to give himself the maximum advantage at The Masters, which is now just 29 short days away.

It’s gonna be a lot of fun at a fall Masters.

Even more fun to see what the Mad Scientist comes up with this time.