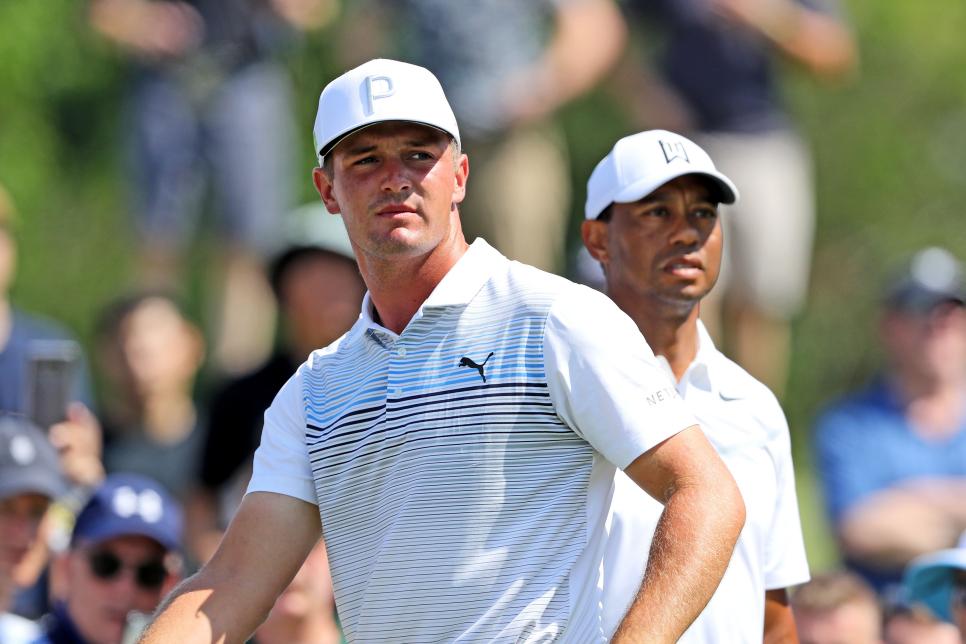 Bryson missed the Masters cut but stuck around to watch Tiger.

Things are in a frenzy this week after The Masters.

Some stars are decompressing at home, others are taking in the relaxed atmosphere of the Heritage at Harbour Town Golf Links on Hilton Head Island.

Bryson DeChambeau will be out 10-12 weeks — he’s having surgery to repair the broken hamate bone in his left hand.

Phil Mickelson may come out of hiding in June — he’s filled out his entry for the U.S. Open — he’s exempt for Southern Hills thanks to his 2021 PGA win.

Tiger Woods is certain he’ll play in the 150th Open Championship at St. Andrews in July and will tune up the week before in Ireland at the J.P. McManus pro-am.

And then there’s the pesky Greg Norman — Servant Of The Saudis — who swears up and down that he’s going to actually announce, you know, that there are players signed up for that controversial Saudi Golf League.

And wait — there’s more — Kevin Na was cornered at Harbour Town and mum was the word — a non-denial denial by Na — sort of — that he’s about to be in cahoots with the Saudis.

Bryson DeChambeau was totally ineffective at The Masters.  He shot 80 last Friday, didn’t come close to making the cut but stuck around to take in the Saturday round of Tiger Woods.

Bryson is expected to be on-the-mend for 10, perhaps up to 12 weeks.  Given his speed training routines and his force at impact, his doctors will want to make sure he has enough time to heal.

Could he be back for the U.S. Open in June?  That would be a fast recovery.

Looks like Phil Mickelson might make his return to golf at the 2022 U.S. Open at The Country Club in Brookline, Mass.  Lefty has filled out his application as has Tiger Woods.

Mickelson is exempt this year thanks to his 2021 PGA Championship win.  Woods is still exempt from his 2019 Masters victory.

Woods also confirmed this week that he’s going to play in the J.P. McManus pro-am in Ireland the week before the Open Championship.

Mickelson May Not Be 2025 Ryder Cup Captain?

Apparently Mickelson’s toxic state has him in bad standing with a lot of PGA Tour players although most won’t say it out loud.

Mickelson was in line to be the 2025 U.S. Ryder Cup captain when the matches are staged in New York.

Fred Couples could be the replacement.  Especially when you consider these comments from Davis Love III, who carries a lot of weight in these decisions.

“Fred’s good in the locker room, in a practice round, as a captain – I thought he would have been a great Ryder Cup captain,” Love said. “He could still be Ryder Cup captain.  We may have to fill a gap somewhere now. Our order is kind of messed up right now. So maybe Fred would be a great home game (captain) in New York.”

Kevin Na’s Not So Denial, Denial:

Of course with Kevin Na in the field at this week’s Heritage, it was a given that he’d be approached regarding his name surfacing in that report from the London-based newspaper — The Telegraph, as one of four players who will be joining Greg Norman’s Saudi Golf League.

Note that Na has been wearing the Saudi Golf logo on the collar of his shirt and he didn’t deny the report.

“As an athlete,” he said. “You always look at your options, that’s all.  Right now I’m focused on this week, trying to play the best I can,” he said. “I haven’t played much this year with a couple of injuries and having a kid, so I need to play more out there and try to get my FedEx Cup ranking up.”

Ditto for Ian Poulter, another name thrown out in the Telegraph story:  Poulter said he didn’t want to “speculate about speculation.  I have no interest in talking about it.”

Bubba Watson isn’t in this week’s field but the Tour’s Rain Man sent out a Tweet this week showing eight PGA Tour events he’s planning to play through July.  “Hoping to qualify for the U.S. Open and the Open Championship and will move things around if I do,” the Tweet said.

Again, no actual, flat out denials from those three.  Lee Westwood was the other recognizable name linked to the supposed announcement that Norman is supposed to be making sooner than later.

Morgan Hoffmann was diagnosed with muscular distrophy back in 2019, he has returned to the PGA Tour this week at the Heritage after spending two years in the jungles of Costa Rica, searching for holistic processes to treat his disease.

Hoffmann shot an even par round of 71 on Thursday and said afterward:  “It felt awesome.  It was pretty surreal, a lot different than the lifestyle I’ve been living the last 2 1/2 years, and having people cheer your name out there, it’s very special.”