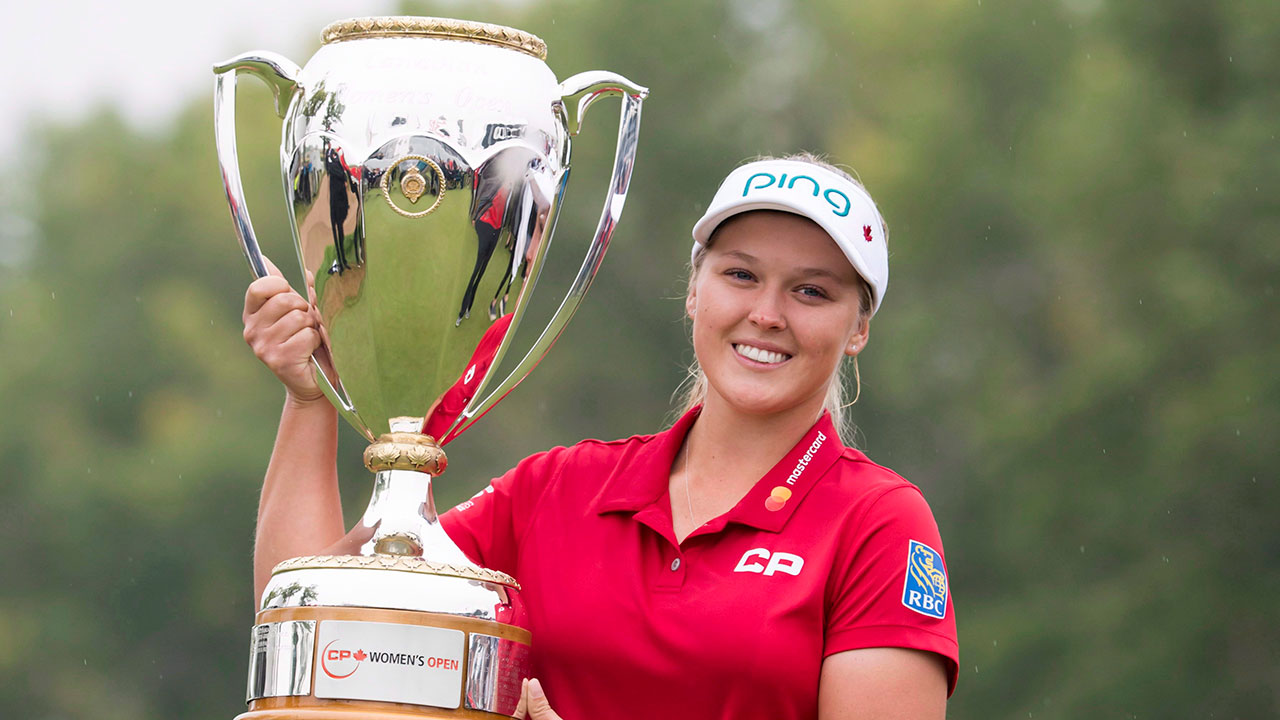 No Canadian men’s golfer has won the country’s national championship since 1954 when Pat Fletcher (remember him?) hoisted the trophy.

This week’s playing of the historic national championship serves as a reminder that there is not a lot of male talent coming out of the Great North.

Fact is, today, Canada’s best player is a young woman — 21-year-old Brooke Henderson — and she’s stepped up as her country’s golf hero.

Sorry guys, is the truth, the whole truth and nothing but the truth.

All you have to do is look at the picture above and there’s Brooke hoisting the Canadian Open trophy.

There won’t be a Canadian winning this week at Hamilton Golf and Country Club.  That’s a safe bet.

But there’s always Brooke, who is poised to become Canada’s best-ever player and winningest.  She has eight wins, including a major, which puts her resume equal to Mike Weir’s.  Weir, be record, is the most accomplished male professional.  The list of Canadian men’s greats is short and sweet.  The late George Knudson won eight times then there’s the legend of Moe Norman, the world’s greatest ball-striking machine who won 55 times on the Canadian Tour.  Stan Leonard won three times on the PGA Tour, Dave Barr twice.

Which brings us back to young Brooke.  Why is there no men’s version of Brooke?

The answer is pretty simple.  Canada is a winter sport country.

Brooke is an anomaly — a unicorn.  She’s already tied Sandra Post’s LPGA win mark and Brooke has a lot of years left in her career.  She’s on track to blow the rest of the field away on wins, no doubt.

Meanwhile, back at the 110th Canadian Open (that’s a lot of Canadian Opens), the home-country lads showed up and showed well on Thursday.

Nick Taylor is ranked 270th in the world but didn’t play like it.  Nick went out and shot a six-under par 64 and it made him low Canadian and tied for second.

Adam Hadwin is the country’s highest-ranked player at 79.  He showed well in front of big crowds and his 65 was good enough to put him just outside the top five (T6).

David Hearn and Drew Nesbitt are 525 and 846 respectively in the OWGR.  They both shot 66.

So did Mackenzie Hughes but he was very frustrated with the double-bogey he made at 18 that basically turned 64 into 66.  “Dinner won’t taste as good,” Hughes said.  “One lapse of concentration on 18.  It stings a little bit.”

For the record, the enthusiastic crowd was hollering “Do it for Canada!” as Mackenzie made his way to the 18th tee.

In all, a good day for the red and white.