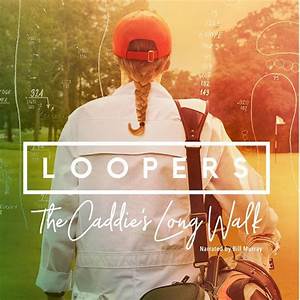 The movie "Loopers" may or may not be at a theatre near you.

It’s certainly not going to be one of your summer blockbusters and it may not even play at a theatre near you.

Regardless, the movie Loopers — The Caddie’s Long Walk — opens today in limited areas, it’s not exactly in high demand.

The one thing most folks know about it is the fact that it is narrated by Bill Murray, a one-time caddie as a youth.

A lot of us started that way — toting bags.  I remember carrying two staff bags around Westwood Country Club in Vienna, Va., in the mid-60s for $5 a bag.  Ten bucks — huge payday.

It was a lot of fresh air and exercise.  Looking back some 50-plus years later, not sure how I did that.

Which brings us back to The Caddie’s Long Walk.

There are some early reviews of the flick, here are a few of them:

“… wishing ‘Loopers’ could be a series with each vignette an episode. Better yet, with striking panoramics of St. Andrews, Pebble Beach, Bandon, Carnoustie and other world-renowned courses, “Loopers” is reminiscent of the BBC’s “Planet Earth” series, educating while aesthetically captivating.” – Golf Digest (March 2019)

“(Bill Murray) does not have a demanding part – he narrates the 80-minute long documentary and makes a short on-camera appearance – but it is sure to be regarded as one of his finest films.” – Chicago Tribune (June 3, 2019)

“I’ve only played a handful of rounds of golf in my life, and I don’t particularly care about the sport. Still, I found ‘Loopers: The Caddie’s Long Walk’ compelling. Any time you get somebody talking about their life’s work you’re probably going to get some good stories.” – Filmthreat.com (February 15, 2019).

“Loopers charts the history of golf from its origins in Scotland to modern times. Traditionally, the caddie’s mantra was to ‘show up, keep up and shut up.’ They were banned from the clubhouse and treated poorly. However, they became an important part of the sport, acting as the player’s technical adviser, psychologist and confidant.” – Sunday Times, Ireland (February 2, 2019).

We won’t have a review for you.  No Looper’s here in Tampa.

But here’s a quick preview with the movie trailer.

Looks like a fun flick.  We’ll no doubt see it one day on The Golf Channel.