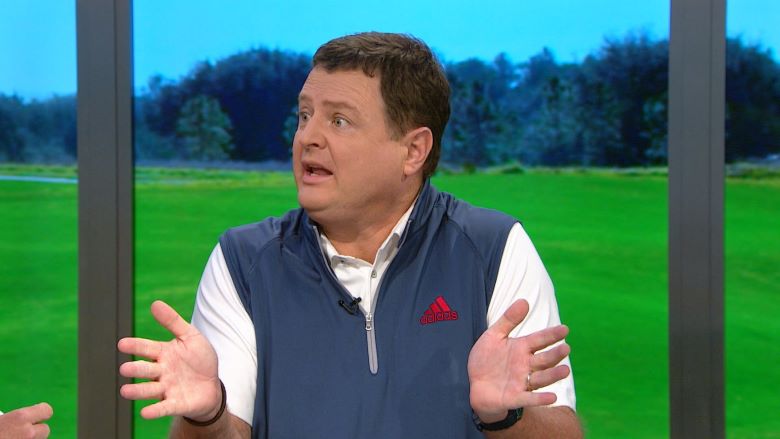 Charlie Rymer was in serious condition while hospitalized.

Charlie Rymer was a longtime familiar face at The Golf Channel but he saw the handwriting on the wall and headed back to his home state of South Carolina.

With The Golf Channel leaving Orlando for Connecticut, Rymer took a made-for-Charlie job as the Golf Ambassador for Myrtle Beach, home to more than 100 golf courses.

Rymer was living happily ever after until he became a victim of the COVID-19 pandemic.

Rymer became seriously ill and was hospitalized where he was seemingly fighting for his life.  Charlie described the virus as “strong” and the 52-year-old former PGA Tour player described his battle  as “very scary.”

Here’s part of his account in his own words:

“I’ve battled COVID-19 for the last 10 days. It’s been scary. Very scary. Thanks to the heroes at Tidelands Heath for putting your health at risk to treat patients like me. Because of you I’m headed home today to be with my family. May God bless you!

“People are asking what COVID-19 is like. It must be different for everyone. I had fever up to 104.7. Chills and sweats. The scary part is the difficulty breathing, coughing and lung spasms that follow the coughing. The shortness of breath makes you think it’s the end.  When your blood oxygen level drops and you go into the hospital you get no visitors.  In the dark by yourself, trying to breath, thinking of family and praying is where it hits you that this thing is STRONG and this could be the end.  Reading about COVID-19 and discussing with friends or watching news reports is one thing. When you have FELT THE POWER OF IT, as I have, you understand that this thing isn’t about left or right politics. It’s about our humanity and survival.”

Rymer’s message for everyone was simple:  “All I ask is that you make good decisions in dealing with this virus. It’s possible to live life, have fun, have commerce and respect your fellow humans. Please be smart. And do the best you can. And finally, never take a sweet breath of life for granted. Especially when you are with people you love and that love you.”

Rymer’s back at his home and making a full recovery.

Looks like Brooks Koepka will play the back-to-back events at Jack Nicklaus’ Muirfield Village Golf Club.  Koepka, who withdrew from last week’s Travelers after his caddie, Rickie Elliott tested positive for COVID-19, will play first in the Workday event that replaced the John Deere.  He’ll then play in The Memorial.  It’s an unprecedented move for the PGA Tour with back-to-back events at the same course.

You might recall that Thorbjorn Olesen got himself in hot water last year on a flight from Nashville to London after the WGC-St. Jude.  Olesen was arrested when the plane landed in London, charged with sexual assault, common assault and being drunk on an aircraft after he allegedly had too much to drink and urinated in the aisle of the plane, exposing himself to a female passenger.

The European Ryder Cupper was supposed to go on trial two months ago but the trail has been delayed by the COVID-19 situation in Europe.  The European Tour has chosen to reinstate Olesen pending the outcome of his trial when it finally happens.

Olesen has pleaded not guilty to each of the charges and has kept a very low profile since.  He did return to play in this week’s Danish PGA Championship on the Ecco Tour.

“I am incredibly sad about what has happened and would like to apologize to all the Danes who have supported me for so many years,” Olesen said.  “I basically haven’t played golf in a year. I played for a week in November in Spain, and then I’ve been playing for the last couple of weeks – that’s it. Since I started playing, I’ve never had anything like that where I haven’t played in such a long time. It’s hard.”

This one’s a head-scratcher:

Francesco Molinari is leaving London after 11 years and moving himself and his family to California.

Molinari, who is spending more time on the PGA Tour and less on the European Tour.

Francesco and wife Valentina have two children (Tommaso and Emma).

Molinari wrote this about his big move:

“It’s been a very strange few months for everyone lately, facing challenges that we never even thought possible.  As many of my colleagues, this forced break gave me a chance to sit back and think about many things. It mostly made me think about the future and what I want to achieve in the coming years, from a professional point of view but mostly from a family standpoint. This is why we’ve decided to leave London and the U.K. after 11 happy, intense, satisfying and consuming years. The next chapter of our life is going to be in California, where we hope to be safe, happy and to spend more time together as a family. This is what’s keeping me busy now and away from tournament golf.”

Puzzling move considering that California is deemed a “hot spot” for COVID-19 infections in the U.S.