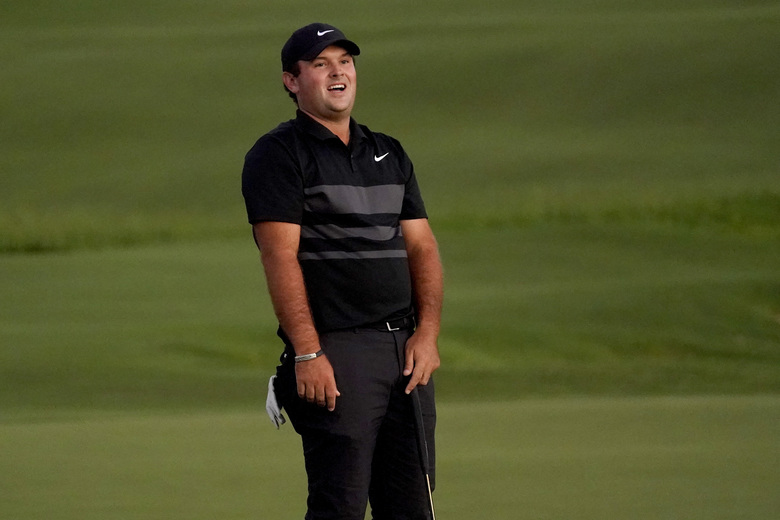 Patrick Reed was appropriately dressed in black from head to toe Sunday for the final round of the Tournament Of Champions.

Perhaps it was his way to reminding everyone that he’s “the bad guy” from an old western movie.

How many times have we heard the phrase “He plays with a chip on his shoulder” when the talking television heads tell us about Patrick Reed.   In the real world, that phrase is basically code for:  “the guy’s an ass-hole.”

Reed, after his bending of the rules at Tiger Woods’ Hero World Challenge, has gone on, business as usual.  Reed is golf’s version of The Honey Badger and we all know “The Honey Badger don’t give a crap.”

So there was Reed, in the scoring room after his round, he finished almost an hour ahead of the final pairing of Justin Thomas and Xander Schauffele.  Reed obviously didn’t think there was much of a chance until there was.  He never left the room to hit putts or make a few swings.  He simply watched.

He watched the drama unfold at the final hole where Thomas choked a three-wood into the chest-high grass short of the green and made bogey, then Schauffele gagged his chances away with an unexpected three-putt from just 36 feet.

Reed was in a three-man playoff.

Schauffele bowed out on the first hole after Reed and Thomas made birdies and he didn’t.  On the second hole, pars sent them back for a third time.

It would end with Reed standing over an eight-footer for birdie.  After the ball left his putter-head, a spectator screamed “Cheater!” loudly.  Reed heard it, everyone heard it.

Reed didn’t talk about it afterward.  He just lamented that winning was all that mattered to him.

“It’s all about winning,” said Reed said, who played the best of anyone over the final 18 holes.  “At the end of the day, I did what I had to do today, I mean, I went out and had to go shoot a low number – especially with how windy it was today – to give myself an opportunity, and I did. Unfortunately, I had two putts to close it (Reed also missed a 12-foot birdie putt on the second playoff hole), and one of them I got gusted on and this last one, with the wind and the break, it got me again.

So the fallout continues.  Don’t look for it to end any time soon.