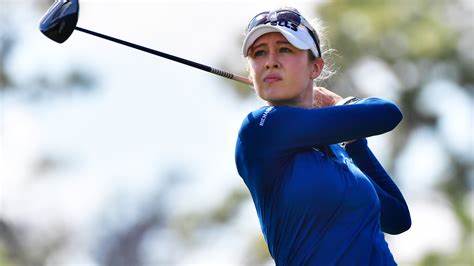 Defending champ Nelly Korda takes a one-shot lead into the final round.

Nelly Korda and overnight leader Jennifer Kupcho had themselves one heck of a head-to-head battle on Saturday at the LPGA Meijer Classic and they will do it again on Sunday.

Korda holed a 22-foot putt for eagle at the 18th for a 66 and heads to the final 18 with a slim, one-shot lead over Kupcho as the two will play again in the final pairing at Blythefield Country Club.

Korda, the defending champion, had just missed a birdie opportunity at the 17th.  A great iron shot for her second into the par five 18th left her with the eagle putt.

“I had a left-to-righter on 17 that I under-read, and I knew that my putt on 18, when I got up to it, that it was going to be a left-to-righter and I just gave it a little bit more than I thought,” said Korda. “I trusted in my line and it just barely dropped in, but it was a perfect putt and it was great to hear the crowd go wild, too. That was really cool.”

It was her second eagle of the day.  She made on on the front nine at the par five eighth.

Kupcho had an eagle try from 18 feet but missed.  Still, the Chevron champion finished with 69 and is at 17-under.

Brooke Henderson’s 67 put her in the next-to-last pairing with Lexi Thompson.  Thompson shot 68l and was in at 14-under par.