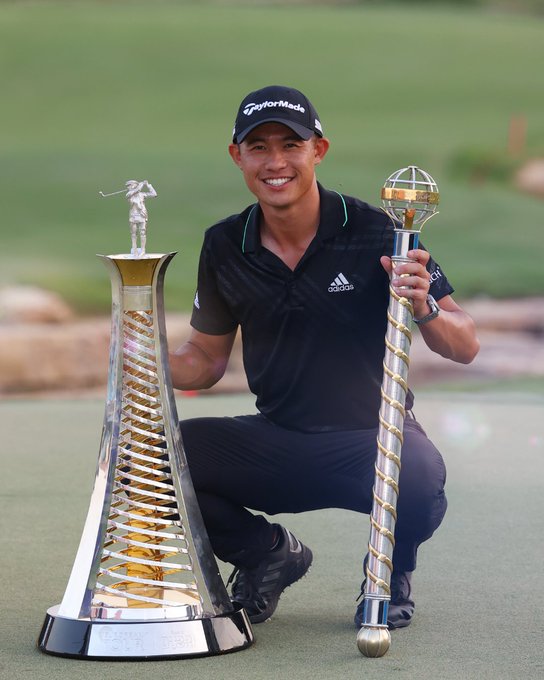 Collin Morikawa walked away with all the hardware in Dubai and $4 million.

It’s easy to enjoy watching a young man like Collin Morikawa — he’s bright, personable, honest, straight-forward and has an incredible skill set when it comes to this game of golf.

He’s the consummate professional and we often forget he’s only 24-years-old — won’t turn 25 until February of 2022.

We forget that he began his professional career by making 22 straight cuts, just three shy of the 26 my His Magnificence, El Tigre — Tiger Woods his ownself.

We also remind ourselves that Collin has played in just 63 events and won six of them, including two majors. He’s only missed six cuts — imagine that — a win for every missed cut!  He’s had a mind-boggling 24 top 10s.

It’s hard not to talk about Collin’s extraordinary iron play.  Great iron players are the ones who win majors — fact of life in the world of professional golf.  He’s already won two and it’s not a stretch that Morikawa will get the career Grand Slam — wouldn’t be surprising if he did it in the next three or four years.  He drives the ball in play and has improved his short putting with the “paint-brush” grip — in Dubai, he went traditional grip from longer distances on the green, goes paint-brush inside 10 feet.  With his iron accuracy, he gets a lot of looks at birdies.  Collin doesn’t have to be a great putter to rack up victories — he simply needs to be above average — and he’s more than that.

He’s the complete package.  His only disadvantage is his lack of big-time power.  His distance off the tee is adequate and on tougher courses where major championships are staged — it’s accuracy and precision iron shots that combine as a formula for success.

One area where Morikawa excels is his maturity and poise under pressure.  It’s something that’s not typical in younger players.  Jon Rahm, the world’s No. 1, is still working on containing that world-class temper of his.  At age 27, he’s done a nice job of getting past that but it still leaks out at times.

Morikawa has no shortcomings in the deportment department.  Credit it to four years in school at Cal-Berkeley.  He’s a guy with a degree and an excellent head on his shoulders.  In fact, if you ran a large corporation that wanted a presence in the world of golf — Morikawa is the perfect brand ambassador candidate.  He’s well spoken and has that million dollar smile and it comes easily to him.

He’s humble yet he can deliver the perfect acceptance speech after a big win — he was spot on in Dubai, delivering an outstanding post-victory talk.

Morikawa’s No. 2 — 9.0238 — in other words, he’s in Rahm’s rear view mirror, getting ever closer.  Remember, objects in the rear view mirror are closer than they appear.

As a reference point, Dustin Johnson’s No. 3 in the world rankings and his point total is 7.9476.  Pretty distant third.

So now that the 2021 version of the PGA Tour is done and the European Tour, soon to be the DP World Tour is done, we turn toward 2022.

What’s next for Collin?

The logical answer is more wins, more majors — basically for this young man, and he’s a special talent — the sky’s the limit.