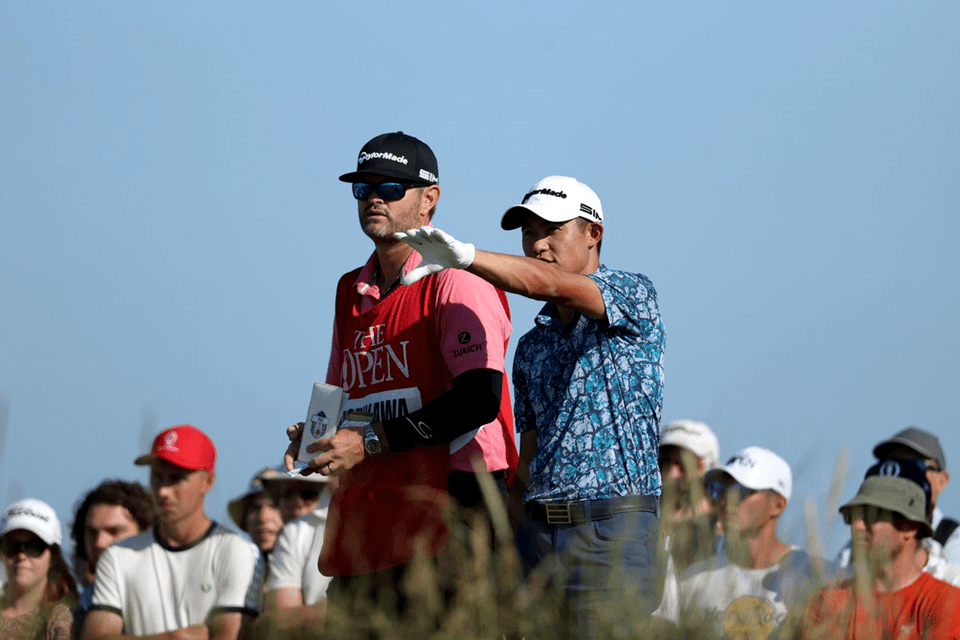 Collin Morikawa and caddie Jonathan Jakovac made all the right decisions at the Open Championship.

Among the thousands of travelers working their way through busy Atlanta Hartsfield-Jackson airport on Monday was a young man in shorts, tee shirt and tennis shoes, toting his backpack, a small overnight bag and a rolling locker-style small box on wheels — inside was the Claret Jug (actually a replica).

It’s just one of the many reasons to really like Collin Morikawa, a humble young guy who just happens to be the new Champion Golfer Of The Year.

He won the Open Championship on Sunday afternoon at Royal St. George’s with a ball-striking, short-game, putting clinic that was purely surgical.  He was the coolest guy on the planet, focused like all-get-out and never flinched on his way to a second major championship in just eight appearances.

To say Collin Morikawa is a special talent is an understatement.  While many of the big names in golf were on their charter, private jets, Collin flew back to the U.S., commercial.

He’s now the third-ranked player in the world rankings, right behind No. 1 Jon Rahm and No. 2 Dustin Johnson.  And you wonder how D.J. is even No. 2, he hasn’t won in 2021, missed the cut at The Masters and PGA, tied for 19th at the U.S. Open and tied for eighth last week at Royal St; George’s thanks to a Sunday 67.  Ho-hum.

Morikawa now has that major and a WGC win and top 10s at the PGA and U.S. Open.  Impressive?  You bet.  As impressive as he is as a player, he’s more impressive as a person.  He handled the acceptance speech on Sunday afternoon like a trained speaker.  Didn’t give it the old “I haven’t got the words” breakdown.  He thanked those who were important, his family, girlfriend and caddie Jonathan Jakovac.  “He’s been with me my entire career,” Collin said and that normally would sound like a long time but Collin’s “career” now spans exactly 24 months as a professional.

Next up for Collin?  The Olympic golf competition starts next week and he’ll be there for team USA.

I’m going. I’m so excited. It’s going to be one of the best things of my life,” Morikawa said after he made team.  “To think back that I was an amateur two years ago, literally two years ago, and to be on this team and to be heading to Tokyo puts a smile on my face.”

Watching this kid can put a smile on anyone’s face.  He does it old-school.  He’s not chasing distance.  Yeah, bombers can get closer to the green but you still have to make the putts and he made the putts last week, especially on Sunday afternoon.  His middle name should be “Clutch.”

He was 172nd in Strokes Gained Putting coming into the Open Championship but he made adjustments in Scotland — he added weight to his putter and went with a conventional grip on longer putts, the dreaded “paintbrush” on shorter ones.

“The best thing about him is his head,” explained the guy who knows his game best — his trusty caddie Jonathan.  “I know the courses, but he thinks like a caddie out there, which is cool,” Collin’s bagman added.  “He doesn’t play too conservative; he plays smart. He’s very methodical about the way he plots it around.”

After the Olympics, where it wouldn’t be surprising at all to see Morikawa medal, there’s a WGC event in Memphis then the FedEx Cup playoffs.

And, by the way, Collin Morikawa just happens to be your FedEx points leader.

Pretty darn good for a pro with 24-months of experience.