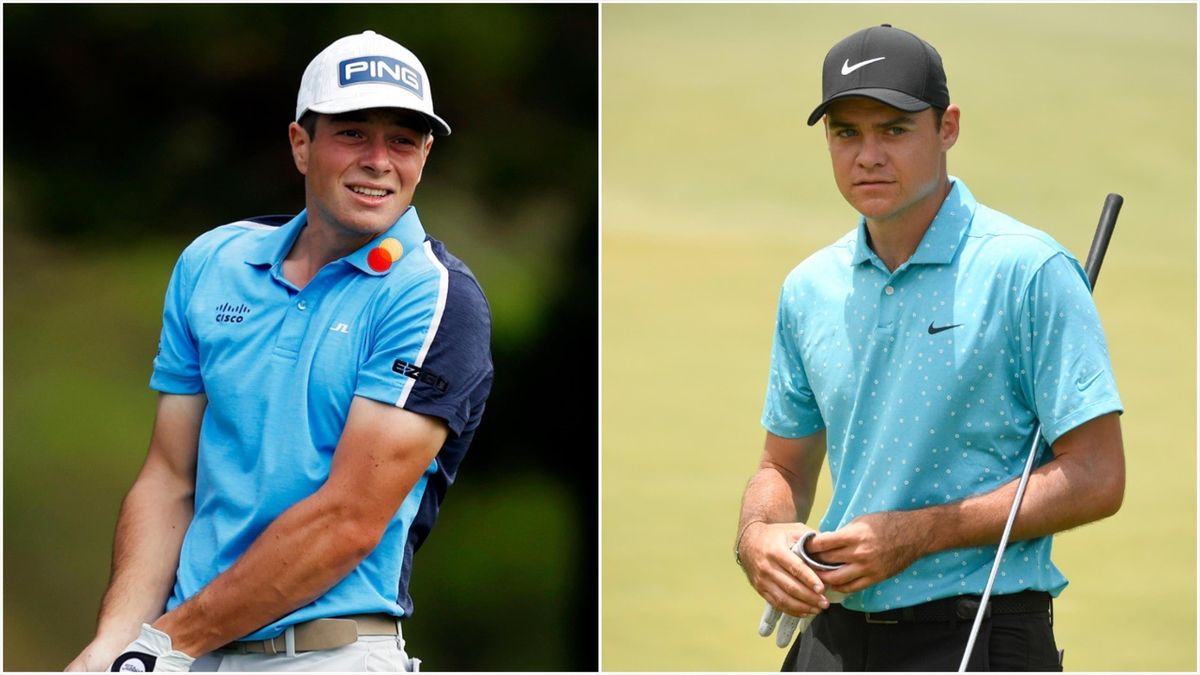 Viktor Hovland and Kris Ventura were teammates at Oklahoma State.

The Norwegian Cowboys — could be the name of a European rock band but it happens to be an apt description for the round one co-leaders at the Zurich Classic at TPC Louisiana.

Viktor Hovland and Kris Ventura were teammates at Oklahoma State and they were one of the two the most effective teams on the course Thursday with a brilliant 10-under par effort in the best-ball (Four Ball) format of this two-man team event on the PGA Tour.

They are separated by 225 spots in the world rankings — Hovland is No. 23, Ventura No.. 248 but they came through with six back-nine birdies on their way to posting a 10-under par 62.  They went out early and their 10-under number held up until late in the day when Scott Stallings and Brice Garnett birdied the final hole to join the Norwegians at 10-under.

“Kris decided to heat up his putter. That really helped,” Hovland said after the round. “But I felt like we really played solid golf all 18 holes.”

Ventura made a 36-foot birdie putt from the fringe on 15 and a 19-footer on 16 for his seventh and final birdie of the day.

For the Stallings-Garnett team, they ham-and-egged  it perfectly.  “We had a tale of two nines,” Stallings said as each player made five birdies, none on the same hole. “It was nice we didn’t birdie the same hole ever, and that’s what you have to do. We did a great job of that today.”

Things got crowded a nine-under as seven teams were in with 63s including the bombs-away duo of Tony Finau and Cameron Champ.  Billy Horschel and Sam Burns were in the group with Finau and Champ.

The team with the two highest-ranked players is Xander Schauffele and Patrick Cantlay.  But those two top-1o guys were two back at eight-under par.

Defending champions Jon Rahm and Ryan Palmer had a ho-hum round and shot a seven-under par 65 that left them tied for 15th with 10 other teams.

Things will get more difficult on day two when the format becomes alternate-shot (Foursomes).  Last year Rahm and Palmer made a huge jump on day two with a seven-under par 65.

It is the toughest of the two formats and will be used for Sunday’s final round.

On Friday, the field will be trimmed to the low 33 teams and ties.

Adam Scott Joins Dustin Johnson In Opting Out Of Olympics:

In March World’s No. 1 Dustin Johnson said he won’t play in the 2021 Summer Olympics in Japan.  This week Aussie Adam Scott joined him on that list.

With the games slated July 29-August 1 at Kasumigaseki Country Club outside Tokyo, it’s a fast two weeks after The Open Championship and a week before the WGC-St. Jude in Memphis then the PGA Tour playoffs in August..

Johnson said at the time:  “It’s a lot of traveling at a time where it’s important for me to feel like I’m focused on the PGA Tour.”

Scott was of the same mindset and he has a young family and is away from them in four-to-five week stretches with his playing schedule.

As it stands now, Cameron Smith and Marc Leishman are slated to represent Australia at The Games.