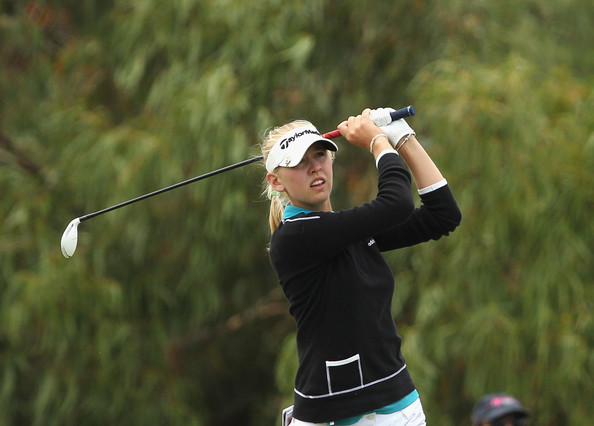 Jessica Korda has just one bogey on her card for the first two rounds.

For two days, Jessica Korda has dominated play at the women’s L.A. Open.

On Thursday she buzzed the Wilshire Country Club with a course-record tying seven-under par 64 and followed that up on Friday with a 65 that put her a staggering 13-under par at the halfway mark.

But as well as she’s played, she has two world-class players right on her heels.  World No. 1 Jin Young Ko finished with a 65 on day two and would have tied Korda’s 64 had it not been for a bogey on the 17th hole.  She’s in at 10-under and right behind her is world No. 3 Sei Young Kim, whose bogey at the final hole Friday left her in a nine-under after posting 66.

Going into the weekend, it will just be a matter of how well Korda continues to play.

If you listen to Korda, her lead should be larger.

“Well, it’s going to sound crazy, but I actually lipped out a good amount out there today, so it actually could have been lower,” she said.  “Just had a little bit of a harder time with some speed today. Other than that, it’s just another good day.”

Korda, the older of the two sisters, picked up her sixth career LPGA win at the season-opening Tournament of Champions. She’s looking to become the first two-time winner on tour this year, something she hasn’t accomplished since 2014.  She referred to her play over the first two days as  “boring,” which means she’s been hitting a lot of fairways and greens — a formula for success at Wilshire.  She’s hit 33 of 36 greens, has made 14 birdies and just a single bogey.  “Honestly, I think I made more par saves (first round) that stand out to me,” she said, “making those five-footers for par, and that’s kind of what counts and kept me in it.

“Being able to make a lot of birdies helps. I know the last couple events I’ve made a lot of bogeys, as well, which has kind of killed my momentum a little bit, and that’s the only thing we’re trying to change a little bit is maybe play a little bit smarter and starting to get a little bit more consistent with my swing, which is really nice,” she said. “That’s really all it is. It’s just making some putts, and it’s been nice. I can’t complain, really.”

But Wilshire can get you if you lose concentration.  Korda’s younger sister, Nelly, the world’s fourth-ranked player, was five-under on Thursday and had it to seven-under until she went triple-bogey, bogey on holes 13 and 14 and a previous bogey at 11 left her with a 40 coming home and her 73 dropped her back to three-under and tied for 25th.

Some big names missed the cut, among them last week’s winner at the Lotte Championship — Lydia Ko.  Ko sealed her fate with a 78 and Thursday and although she improved by 10 shots on Friday, she was four-over par and missed the 36-hole cut by two shots.  ANA winner Patty Tavatanakit finished four-over and headed home early as did L.A. resident Michelle Wie West, who was five-over for her two days.

The Korn Ferry Tour is in Dallas this week for the Veritex Bank Championship and of course it was the perfect opportunity for the sponsors to invite former quarterback, now CBS football analyst Tony Romo to show off his skills.

Romo carded a 77 on Thursday at the Texas Rangers Golf Club and found himself in at 154th in the field meaning he’ll be back with his buddies for their Saturday morning money game.

Tournament leader Anders Albertson cut Romo’s score by 15 shots as he carded a nine-under par 62 to take the first round lead.

Max Greyserman was a shot of the lead with a 63.

Thorbjorn Olesen Is Back, Shoots 61 At Gran Canaria Open:

You might recall that Thorbjorn Olesen got himself in a heap of trouble back in July of 2019 when he allegedly got out of hand on a flight from Nashville to London after the WGC-St. Jude and got himself arrested when that flight landed in London.

He was suspended by the European Tour pending his trial but that was put on hold until December of this year due to the COVID-19 situation.

He’s been allowed to play again and he’s the 36-hole leader at the Gran Canaria Open in Spain.

Olesen followed his opening 65 with a dazzling nine-under par 61 on Friday and is 14-under par at the par 70 Meloneras Golf Club.  He’s two shots in front of Germany’s Max Kieffer, who lost in a playoff last week to American John Catlin at the Austrian Open.  Kieffer is in at 12-under with rounds of 63-65.